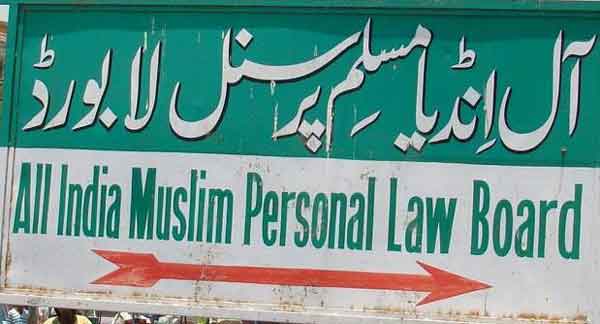 All India Muslim Personal Law Board is a representative body for the Indian Muslims. The board was established in 1972 in Mumbai, and its Dastoor (constitution) was adopted in 1973 in Hyderabad. After independence,people from Muslim communities belonging to various schools of thought came together on a common platform to defend Muslim Personal Laws. First meeting between the communities was held at Deoband where a convention was made and All India Muslim Personal Law Board was formed. Hazrat Maulana Qari Taiyab Qasmi and Hazrat Maulana Syed Shah Minnatullah Rahmani were elected founder President and General Secretary of the Board.

Founders of the community believed that Islam should guide actions of every Muslim because it lays down rules relating to every sphere of life of Muslims. They believed that Islam provides comprehensive guidance to its followers no other source of law should guide their actions. Thus for effective implementation of the laws under Islam the board was established.The current president of the board is Maulana Syed RaabeHasaniNadvi.

This notably runs counter to the aspiration of a Uniform Civil Code in India to govern all the Indian citizens in the same way in civil matters. Further, many allege poor treatment of women under Muslim personal laws – such as easy divorce at will (talaq) and lack of liability to pay maintenance to separated wives like husbands from all other communities in India are required to under law. However, what is probably cited the most as a violation of the rights of the women is the right of a Muslim man to have 4 wives concurrently – while bigamy or poligamy is a criminal offence for all other Indian men. However, the AIMPLB is the strongest defender to maintaining the status quo on such issues and resistance of an Uniform Civil Code.

Function of the Body

Defence of the Shariat

Muslims in India are governed by The Muslim Personal Law (Shariat) Application Act, 1937 which directs the application of Muslim Personal Law to Muslims in marriage, mahr (dower), divorce, maintenance, gifts, waqf, wills and inheritance. The objective of the AIMPLB is to defend the Shariat against any interference by the state or civil society. The Central Government has not repealed the Muslim Personal Law (Shariat) Application Act, 1937 but some of its legislatures go against it.The attempts in the country to integrate Indian society under common civil code is strongly resisted and is viewed by Indian Muslims as an attempt to dilute the cultural identity of the minority groups of the country. The board has objected to the Divorce Laws for Muslim women and has published a book Nikah-O-Talaq in this regard. According to the AIMPLB, payment of maintenance by husband to wife after divorce is limited to the iddat period only. This was discussed in the case of Shah Bano Begum wherein it was stated that if at any point if the Muslim Personal Law comes in conflict with the uniform code then the later one would prevail. The board opposes any uniform code that infringes the rules under Muslim Personal Laws.

Validity of the Body

The AIMPLB submits its suggestions and resolutions for the protection of the Muslim Personal Laws and on the basis of those suggestions Parliament enacts laws. After the Shah Bano case the Parliament in the year 1986 enacted The Women (Protection of Rights on Divorce) Act.Later in the case of DanialLatifi[1] the constitutional validity of the women (protection of rights on divorce) act 1986was questioned. The Apex court upheld the constitutionality of the Act but it interpreted the text of the act and stated that the Liability of Muslim husband to his divorced wife arising under Section 3(1)(a) of the Act to pay maintenance is not confined to iddat period. However, the statute now requires that the payment will be made as a one time payment during the iddat period.Thus, even if the resolutions submitted by the board are enacted by Parliament- such enactments have been very susceptible to change.

Courts take the view that where there is a conflict between terms of a uniform code and the rights and obligations of any individual group, the former would prevail.Law of the land should be applied uniformly on all, one set of legislation for Muslims, and a different one for non-Muslims should not dilute concept of equality under law.

Courts in past have laid down some important points related to the application of Muslim Personal Laws in India. The Shah Bano[2] case can be regarded as a turning point since the status of the religious personal laws was minutelydiscussedhere. In this case, there was controversy on the liability of husband to provide for maintenance of his divorced wife as laid down under Section 125 of the Criminal Procedure Code and Muslim Personal Laws. Under Muslim Personal Lawafter iddat period gets over no maintenance is paid to women as it is believed that divorced wife ceases to be wife but under Section 125 of Criminal Procedure Code it is stated that until a woman has remarried she is entitled to receive maintenance form her husband.In this case, Shah Bano was divorced by her husband Muhammad Ahmed Khan and thus sued him for maintenance. The Apex Court very minutely studied the elements of the case and held that rule laid down under Muslim Personal Law cannot be accepted and divorced wife unable to maintain herself must receive maintenance form her husband. It was also stated in the judgment that the Constitution aims at establishing equality among people by proving a uniform code and thus any religious law should not violate it. Thus, it can be inferred that in a situation where there is a conflict between Muslim Personal Laws and Uniform code them the latter one prevails.

Further, the case of Noor Shaba Khatoon[3] should also be studied for proper understanding of the interpretation of courts for Muslim Personal laws. In the above case the appellant filed for maintenance for her children aged 6years, 3years and 2 ½ years. The high court subject to the section 3(b) of the 1986 Act held that the grant of maintenance to the children of divorced Muslim parents, living with their mother, was restricted to the period prescribed under the said section notwithstanding the provisions of Section 125 Cr. However, decision of the High Court was put aside by the Supreme Court. The Apex court held that Section 3(1)(b) of the 1986 Act does not in any way affect the rights of the minor children of divorced Muslim parents to claim maintenance from their father under Section 125 CrPC till they attain majority or are able to maintain themselves, or in the case of females, till they are married. It was further held that so long as the conditions for the grant of maintenance under Section 125 CrPC are satisfied, the rights of the minor children, unable to maintain themselves, are not affected by Section 3(1) (b) of the 1986 Act.

Currently Delhi High court has also rejected a bail plea of a man who raped a 17 year old girl who was his lover. It was held that India is a secular country and Sharia cannot override the same. It was held that “The Muslim Personal Law only applies to cases relating to marriage, divorce and personal relations but has no applicability in case of a criminal liability”. Thus, it is clear from the decision that Muslim personal law cannot override criminal Law.

Criticism for the board

Many times it appears that the Board has deviated from its basic purpose and objective which was to defend the Shariat against any interference by the state or civil society. The Board has launched social reform movements for propagation of good conduct in the Muslim communities and has persuaded them to abide by the Shariat in their personal and collective lives but has never studied their impact on Muslim Indian Society. Some accuse that there are clear indications of its increasing deviation from the path of the Shariat.

Further the Board claims to be a representative body of Indian Muslims but if its composition is properly studied it will be seen that it has always been dominated by the Ulama of the Hanafi School with marginal presence of all other schools, namely, Shafii, Maliki, Hambali and Jafri. The Board also does not include eminent jurists, social scientists or political personalities, even Members of Parliament whose services it requisitions when it faces the Government.Further questions are raised related to the transparency of their annual accounts because neither the donations nor the details of the establishment expenditure including travel by office-bearers are recorded.

The result of the above criticisms is that the Board is losing influence and parallel personal law boards are emerging on the scene like, the Muslim Women’s Personal Law Board, the Sunni and the Shia Personal Law Boards the All India Muslim Personal Law Board (Jadid). If this process intensifies, it will result in virtual disintegration of the Board, sect-wise & gender-wise. The Board has not made any effort to establish a dialogue with the parallel Boards or to co-opt their active members.

Aim of the Constitution of India is to establish secularism in India and hence religious personal laws sometimes seem to go against it. All India Muslim Personal Law Board is established to encourage the application of Shariat Act in India by making suggestions and resolutions before the Government. Over time, it might be losing its relevance altogether.