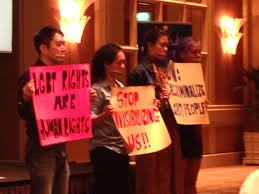 Section 377 of the Indian Penal Code deals with unnatural offences. It reads as Unnatural Offences – Whoever voluntarily has carnal intercourse against the order of nature with any man, woman or animal, shall be punished with imprisonment for life, or with imprisonment of either description for a term which may extend to ten years, and shall also be liable to fine.

Explanation – Penetration is sufficient to constitute the carnal intercourse necessary to the offence described in this section.

The literal interpretation of this section implies that it makes sodomy, bestiality, paedophilia, tyke sexual abuses and homosexuality punishable. In short, it prohibits every kind of sexual intercourse except heterosexual penile-vaginal intercourse. In addition to that, consent of the individuals is immaterial in such cases. The section has attracted a lot of controversy over the past decade and the demand to decriminalise homosexuality has been on rising. The first petition for this cause was filed in 1994 by AIDS Bhedbhav Virodhi Andolan.

In 2001, Naz Foundation, an NGO working for the prevention of HIV/AIDS filed a writ petition in the High Court seeking decriminalisation of sexual activities criminalised in Section 377 to the extent that consensual sex between two sane adults should not be covered by it. The petition was rejected on the grounds that the petitioners did not have a locus standi in the matter. Naz Foundation made an appeal against this in the Supreme Court, which accepted their contention and ordered the Delhi High Court to admit their petition which was a public interest lawsuit.

The petitioners, Naz Foundation Trust argued that the current status of the Section discouraged the LGBT community to come out of the closet and avail the remedies against HIV/AIDS.  It further argued that it is discriminatory in nature and classifies arbitrarily based on sexual orientation. They also pointed out that Section 377 which criminalises sexual acts against the ‘order of nature’ is based traditional Judeo-Christian moral and ethical standards which abuse homosexuals. Section 377 leads to harassment, forced sex and abuse of the LGBT community by the police.

In 2009, the Delhi High Court in Naz Foundation v Government of N.C.T Delhi [1] struck down the Section as being unconstitutional and violative of Article 14, 15, 19 and 21. The court gave a broadly reasoned judgement where it held that criminalising homosexuality draws an arbitrary distinction between procreative sexual intercourse and non-procreative sexual intercourse.  Thus against the spirit of right to equality enshrined in Article 14. It further held that it is violative of Right to Privacy and is discriminatory in nature. In arriving at the decision, the High Court relied on a number of documents including foreign judgements, various principles and literature from worldwide including the Yogyakarta principles to study sexuality and sexual orientation extensively. It also took into account the global trends regarding homosexuality. It observed that ” The criminalisation of homosexuality condemns in perpetuity a sizable section of society and forces them to live their lives in the shadow of harassment, exploitation, humiliation, cruel and degrading treatment at the hands of the law enforcement machinery.”

The Court took up the SLPs in one case and overturned the decision of the High Court of Delhi in 2013. Homosexuality was criminalised again. The reasons recorded by Justice Singhvi of Supreme Court in arriving at the decision are:

The Supreme Court has given a very narrow definition of the provisions under the Article 14, 15 and 21. It has not taken into account the changing trends in the world and wider acceptance of different sexual orientations. Unlike the Delhi High Court, it has not considered the historical background and values of the Indian culture where there are evidence of the prevalence of homosexuality. Many temples manifest scenes of people indulging same gender sexual intercourse which the society today considers obscene.[3] Thus, the argument of the respondents that homosexuality being a sin is a western concept and Indians have always been fine with it should have been admitted. Decriminalising homosexuality would have reaped many benefits such as the better implementation of methods for prevention of HIV/AIDS and protection of the LGBT community from the abuse of the police and other public authorities. It would have ensured their Right to live with dignity. India has an estimated 25 lakh gay population and about 7 per cent (1.75 lakh) of them have HIV.[4] Thus, there is a need to accept the sexuality of this substantial chunk of the population and let them live as respectable citizens of India. Since the judgement by the Supreme Court has left it on the parliament to make changes in the IPC regarding Section 377, efforts were made by Dr Shashi Tharoor. He introduced a private member’s bill to decriminalise consensual sexual intercourse between two adults. However, this motion was defeated.[5] Even the Finance Minister Arun Jaitley has said that the Supreme Court needs to review its decision on Section 377.[6] There is a need for parliament to debate this matter reasonably and make provisions to safeguard the rights of LGBT community. The first step towards this will indeed be decriminalisation of homosexuality by making necessary amendments.