This article is written by Jessica Kaur, from Rajiv Gandhi National University of Law, Punjab. Here, she examines whether a partnership firm can be dissolved through arbitration.

Being a partner in a firm is a tough job: you’ve got to work with your fellow partners on all matters, reach consensus on decisions, be responsible for each other’s actions, and bear the burden of losses together. It comes as no surprise that the stress and work involved can create tensions between partners, which sometimes reach irreversible levels and call for a dissolution of the partnership. This could either mean a radical change in the relationship between the partners, or the complete termination of the business. Usually, a partnership is dissolved by a unanimous decision of the partners or by an order of the court, or through any other means agreed upon in the Partnership Deed.

Nowadays, a field that is gaining traction in the legal arena is arbitration. A lot of firms use arbitration to resolve disputes and settle issues. It’s faster, easier, and often cheaper, and does not involve the hassles that a court procedure does. But, can an arbitrator also bring about the dissolution of a firm? In this article, we shall answer this question.

Arbitration makes use of an unbiased third party to resolve disputes and settle differences between the two parties who have entered into an agreement or a contract. However, can an arbitrator make a decision on all sorts of disputes and issues? The answer is no, and the specific scope of arbitration as talked about in the case of Booz-Allen & Hamilton Inc vs Sbi Home Finance Ltd. & Ors (2011). Here, the Supreme Court of India held that all civil and commercial disputes based on a contract or otherwise within the jurisdiction of civil courts can be resolved through arbitration. The main principle established in this case was that all disputes relating to rights in personam i.e. right attached to a specific individual would generally be arbitrable, while those relating to rights in rem would not, as they affected the world at large and involved public interest and so could not be decided privately by an arbitrator. Thus, non-arbitrable matters include disputes involving criminal offences, matrimonial disputes, etc.

Can a partnership firm be dissolved through arbitration?

There can be two situations where an arbitrator is involved in the dispute resolution between partners: either the partners have themselves engaged an arbitrator according to the arbitration clause in their partnership deed, or the court has specially appointed an arbitrator to look into matters brought before it in the form of a suit. The second situation has been talked about in Section 8 of the Arbitration and Conciliation Act, 1996.

Now, the question arises as to whether the dissolution of a partnership firm comes within the ambit of arbitration discussed in the previous section. Logically, the decision of an arbitrator to dissolve a partnership would affect the parties to the arbitration agreement and not the world at large. Since it is a private matter and relates to rights in personam, it should fall under the scope of arbitration.

To affirm this reasoning, let’s have a look at the important case laws where the court declared that arbitration could be used to dissolve a partnership.

Before that, we must talk about the case of Haryana Telecom Ltd. v. Sterlite Industries (India) Ltd. (1999). While this case involved winding up of a company and not the dissolution of a partnership, it is relevant to our discussion. In this case, the Supreme Court said that the power to wind up a company rests in the hands of the court as given by the Companies Act and therefore, an arbitrator does not have jurisdiction in this matter. This case was cited by the petitioner in Mahendra Kumar Poddar v. Bansal Builders and Ors. (2000), which we shall take a deeper look at.

This case involved the issue of dissolution and winding up of the firm M/s Bansal Distributors. The High Court referred the dispute to an arbitrator. The petitioner, citing the above-mentioned case of Haryana Telecom Ltd. v. Sterlite Industries (India) Ltd. (1999), claimed that just as winding up of a company could not be decided by an arbitrator, similarly he could not make a decision regarding the dissolution of a partnership firm too. Therefore, only the part of the dispute relating to accounts could be brought before an arbitrator.

Can it be said that the dispute in respect of the partnership accounts can be resolved by the arbitrator but the dissolution of a firm can be done by a court of law alone?

Thus, the reasoning behind allowing an arbitrator to decide dissolution, which we discussed above, has been confirmed by the court in this case. Finally, this disputed principle was properly established within certain boundaries in another case in the same year, which can be seen below.

In this case, members of the Patel family came together to form a partnership firm which manufactured, sold and marketed different varieties of tobacco. Their agreement said that any questions regarding the rights and obligations of the parties and the use of the firm’s trademarks would be referred to the sole arbitration of a certain retired Judge of the Bombay High Court.

On 1st August 1987, a Deed of Retirement was executed between the partners, ordering the retirement of the respondent H.H. Patel. The respondent filed a suit challenging this deed and claimed that he was still a partner of the firm. A dispute also arose between the two parties regarding the use of the firm’s three trademarks. In light of these disputes and the close relation of the parties, the court suggested them to go for arbitration as provided by their agreement.

The arbitrator held that the retirement deed was invalid and the respondent continues to be a partner. However, he denied considering the respondent’s claim seeking dissolution of the firm, saying that it was beyond the scope of his reference.

Whether it is permissible for an arbitrator to decide the question of dissolution of a firm?

Clearly, an arbitrator can decide the dissolution of a firm. An arbitrator might award dissolution on the grounds that it is “just and equitable” to do so. This can occur in various different situations, like when the dispute between the partners is severe and beyond repair, or when the business is not being carried on as per the provisions of the agreement between the partners. However, don’t we always assume that the court will decide what is just and equitable? The Partnership Act too, says in Section 44(g) that the court has the power to dissolve a firm if it finds it “just and equitable” to do so. Can we expect an arbitrator to take the right decision on a relatively ambiguous basis as this, and understand it to be binding on the parties? This question was raised in the case of Yogendra N. Thaker v. Vinay Balse and Anr. (2018).

On 1st October 2003, the respondents issued a notice seeking to suspend the petitioner as a partner of the firm. The petitioner challenged this in an arbitration petition.

The arbitrator held that the business was being carried out against the provisions of the Partnership Deed and that the firm should be dissolved. The petitioner issued a notice for dissolution. The respondents challenged this saying that an arbitral court could not decide dissolution under Section 44(g) of the Indian Partnership Act, 1932, i.e. because it was “just and equitable” to do so. They claimed that only Courts had the power to make this decision on this basis.

Whether the power to dissolve a partnership firm under Section 44(g) of the Partnership Act rests only with the court and cannot be exercised by an arbitral tribunal?

The Bombay High Court held that under the arbitration clause of a partnership agreement, the arbitrator has the power to decide whether the firm should be dissolved or not, even though no express provision regarding the same has been given in the Partnership Act. The respondents had already accepted that an arbitral tribunal has the power to dissolve a partnership under subsections (a) of Section 44 of the Partnership Act and so their argument that it couldn’t do so under Section 44(g) did not make sense, as dissolution on just and equitable grounds is also a form of dissolution.

Also, their argument would go against the wide arbitration clause given in their partnership agreement which said that all disputes and issues could be resolved by arbitration, which therefore included dissolution.

Thus, there are two important takeaways from our discussion on arbitration and dissolution: first, that where the partnership agreement of a firm provides a wide arbitration clause and states that all disputes between partners shall be resolved through arbitration, it also involves the question of dissolution of a firm; and second, an arbitrator or arbitral tribunal can award dissolution of a firm which will be legally binding on the parties and its authority to do this has been backed by the court. 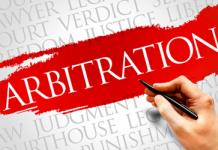