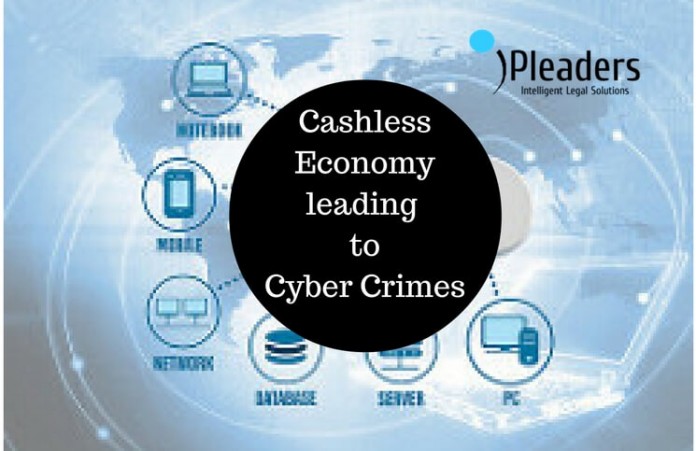 This Article on “Is Cashless Economy Eliciting Cyber Crimes?” is written by Ishita Mehta.

As we say that everything comes with its own cost. Digital Cashless transaction might seem like a very convenient option after the demonetization, which is leading India towards a Cashless Economy but, it all does come with its own cons.

After the announcement of demonetization, a majority of people from the urban area are using online methods for payments through e-wallets and plastic money. Most of the payments and transactions are done via online payments through mobile phones, which can lead to mobile frauds. The number of people using the internet is increasing day by day. This might lead to increase or boost in more cyber crimes.

Online applications like Paytm, PayPal etc. seem like a very good option in the times of demonetization but, our major concern here is – can it lead to boosting up of cyber crimes?

Another problem is that the money which is lost in the cyber crimes is way more than the money which is actually recovered. Currently, there are millions of users of the internet and these users are increasing day by day as more and more people are having access to mobile phones. People are aware of the risks that are involved in cyber crimes but, they are still not ready to have security.

While the monetary and political measurements of demonetization are by and large fervently, the national security measurements of this move has still not completely been fathomed by the government. One of the announced intentions in demonetization is to move towards a money based economy to a cashless economy at great extent. In fact, one of the primary organizations to praise the demonetization was Paytm – an organization that took out full paper advertisements commending the move. Different organizations that ought to celebrate are installment portal framework organizations like – Visa and MasterCard. RuPay likewise gave out their points of interest over the built up remote ones by predominantly, significantly bringing down the charges.

RuPay likewise gave out their points of interest over the built up remote ones by predominantly, significantly bringing down the charges.

A Cashless economy will definitely lead to more dangerous cyber crimes. Though the Indian government has asked all the banks to waive off the debit card charges, this means that no transaction fees will be cut off if the person uses his or her debit card as a method of payment. But still, the experts are saying that cyber crimes’ danger is yet to stay.

Who Are The Major Targets To the Cyber Crime?

Kinds Of Frauds Related To A Cyber Crime

A recent survey has brought to light that the major cyber crimes are related to the credit cards’ and debit cards’ fraud. It is followed by a lot of complaints related to cyber-bullying, like-morphed photos, stalking, threatening to lead images online.

We also have been cheated cell-phones, have got our email id’s hacked, despite all this, cyber crimes’ victims continue to work in this risky business.

Intellectual property comprises of a heap of rights. Any unlawful demonstration by which the proprietor is denied totally or somewhat of his rights is an offense.

The normal type of IPR infringement might be said to be programming robbery, encroachment of copyright, trademark, licenses, outlines and administration check infringement, burglary of PC source code and so on.

It implies where two people guarantee for a similar Domain Name either by asserting that they had enlisted the name first, by right of utilizing it before the other, or by utilizing something like that already. For instance, two comparative names i.e. www.yahoo.com and www.yaahoo.com.

Hacktivism assaults those included Famous Twitter, blogging stage by unapproved get to control on the PC. Because of the hacking action, there will be the loss of the information and also the PC.

Likewise, inquire about particularly demonstrates that those assaults were not primarily planned for monetary benefits as well and to lessen the notoriety of specific individual or organization. The recent example is the hacking of Rahul Gandhi twitter account.

It intends to get into somebody’s PC without the correct approval of the proprietor and does not aggravate, adjust, abuse, or harm information or framework by utilizing remote web association.

Basically, Internet time robbery goes under hacking. It is the utilization by an unapproved individual of the Internet hours paid for by someone else.

The individual who accesses another person’s ISP client ID and secret key, either by hacking or by accessing it by illicit means, utilizes it to get to the Internet without the other individual’s information. You can recognize time robbery if your Internet time must be reviewed regularly notwithstanding, occasional utilization.

Cyber fear based oppression is a noteworthy smoldering issue in the local and additionally worldwide concern.

The normal types of these fear on the Internet are-

Digital fear mongering exercises jeopardize the integrity and uprightness of the country.

It is politically roused hacking which leads to damage and undercover work. It is a type of data fighting in some cases, seen as similar to traditional fighting.

It is anything but difficult to get to any data by the fear of terrorists with the help of internet to have the data for political, religious, social, ideological goals.

There have been various methods to protect the individual from cyber crimes.

¤  There are rural areas which need proper implementations as they are hardly aware of cyber crimes and cyber threats.

We often see that in India there is no standard platform adopted and there is a probable need to make a platform to regulate the security practices.

There is an urgent need for data localization in India. India needs to have and attain high awareness with respect to plastic money concept too, that’s when India’s attempt towards cashless economy will become secure.

There are both pros and cons to a money related cyber community where money no longer assumes a part of significance. India is a phenomenal case of how things can escape hand rather rapidly in the coming months.

Many individuals are not instructed on how they ought to take benefit of Cashless economy, which accidentally makes them a high-esteem focus for web offenders.

To put this line of reasoning into a point of view, these individuals are more inclined to phishing and social building assaults.

What do you think about effects of Cashless Economy? Positive/Negative? Whatever it’s, drop a comment in the comment box below, we’ll love to have a discussion.

Also, do tell us which part of the article you found more alluring and concrete. We’ll talk more about it in our next post.