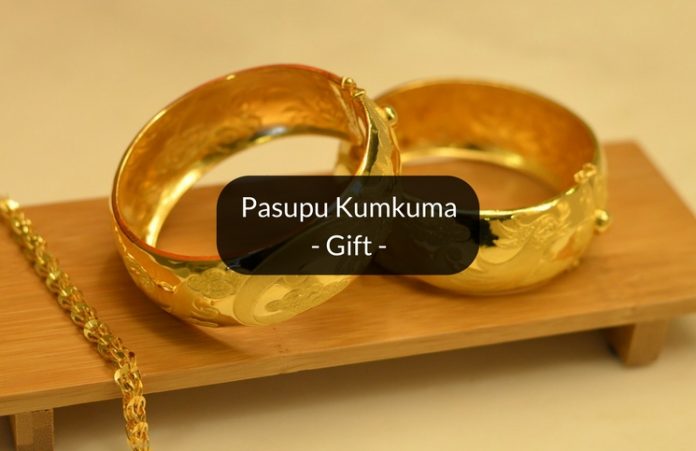 According to the Law Lexicon by P. Ramanatha Iyer., Pasupu Kumkuma is a gift, settlement or assignment of land to a daughter. At the time of Manu, a daughter along with her brothers had a right to share in the father’s property. With the passage of time, it became a duty of the father to maintain the daughter covering all the reasonable expenses.

Marriage is a sacred Hindu tradition where a father offers his daughter to become a part of the other family and therefore out of love and affection, he is allowed to offer the daughter some property, movable or immovable as gift. It is the very basic instinct of the society to claim what it thinks it has a right on and therefore moving with their instinct disputes started arising on the nature of the property that was given by a father to his daughter in marriage.

Questions were raised whether the property thereby offered falls in the ambit of term ‘gift’ as laid under S. 122 of the Transfer of Property Act[1], which then requires lawful registration of the immovable property, or can it be transferred by a mere oral declaration because the property offered is a part of the duty imposed by S.3 of the Hindu’s Adoption and Maintenance Act.

The society changes and with it the laws are modified to maintain the normative culture. The final remnant is that it is the obligation of a father to maintain his daughter in the scope as laid down by S. 3 of the Hindu Adoption and Maintenance Act[2] including marriage expenses.

With this an opinion grew in the mind of the society that since S.3 covers the ambit of expenses incurred in marriage, any property offered to the daughter in marriage cannot be termed as a ‘gift’ within the meaning of Section 122, Transfer of Property Act.

The way of giving a property by the way of ‘Pasupu Kumkuma’ is involuntary and considerate and does not hold the essential ingredients of a gift. Once the property is out of the ambit of S. 122, it does not require a written document or a registration by law; such property can be transferred by mere oral declaration.

It was held by the court, “a Hindu father, mother or other guardian has to give his or her daughter in marriage to a suitable husband as one of their legal as well as a moral obligation. The daughter for the purpose of her marriage is moreover entitled to set apart a portion of the family property. In enacting Section 3(b)(ii) of the Hindu Adoptions and Maintenance Act, 1956, the legislature codified the well settled principles of the Hindu Law and made the payment of reasonable expenses incurred in the marriage obligatory.

Hence, both under general Hindu law and the Hindu Adoptions and Maintenance Act, 1956, the father has a duty to give some property on the occasion of her marriage. If the conveyance is made to discharge the obligation of the father to provide for maintenance of the daughter and the share of reasonable expenses incidental to the marriage, it can be said to be a transfer for consideration and as such it will not be a ‘gift’ liable to gift tax under the Gift-tax Act, 1958.”[3]

Once judiciary opined on the this matter, the cases piled up in courts regarding the validity of the transferred property and disputes between family as to claim of the property given by the way of ‘Pasupu Kumkuma’.

The debates and discussions were put to rest by the judgement delivered by the court in Bhubaneswar Naik Santoshrai and etc. vs. The Special Tahsildar Land Reforms Tekkali and Ors.[4] The court unhesitatingly held that it was evident from the case at hand that the so-called gift of the property purported to have been made by the petitioner is legal, valid and binding. Since it does not fall in any of the transactions enumerated in Section 122 of the T.P Act and is not a gift with this the meaning of the aforementioned provision, such transfer does not require any registration.

The decision rendered in the above-mentioned case faced criticism and was seen as an error made by the judges by not realizing the essence of the issue. A need to remove the errors was felt soon.

Ekbote, J. in his judgement refused to accept the contention that a gift made during marriage is not required to be registered by law. He stated his refusal and dissent in these words:

“It is difficult to accept the contention that a gift made at the time of marriage is not required to be in writing by any law. Any such contention would be flying in the face of Section 123, T. P. Act. It may be that under the Traditional Hindu Law no writing for the validity of transfer of property made at the time of marriage was necessary. There was no transaction under Hindu Law which absolutely required a writing.

But after the T. P. Act came into force, to say that the oral gift can be made at the time of marriage by way of Pasupu Kumkuma would be inconsistent with section 123 of T. P. Act. That is a provision applicable to all gifts which transfer Immovable property. It is therefore necessary in order to constitute a valid gift that not only it should be in writing but it must also be registered”.[5]

It was in the case of Gandevalla Jayaram Reddy vs Mokkala Padmavathamma And Others[6] that the decision of the division bench of this court in Bhubaneswar Naik case was found to be incorrect and overruled accordingly.

It was held that the learned judges in Bhubaneswar Naik case  proceeded on a wrong premise in holding that pasupu kumkuma is not a gift. ‘Pasupu Kukuma’ as defined in P. Ramanatha Iyer’s Law Lexicon means a gift, a settlement or assignment of land to a daughter. Inevitably therefore, such a gift of immovable property, the consideration whereof would be love and affection could come within the meaning of Section 123 thereof. [7]

The learned Judge, Ramaswami, J. also observed in Serandaya Pillai And Anr. vs Sankaralingam Pillai And Anr. that where a transaction is a gift of the immovable property, it should be registered and effected by writing.[8]

Therefore, it is now a well settled principle of law that any gift of immovable property to a daughter by the way of ‘Pasupu Kumkuma’ during marriage is required to be stamped and registered since it is a gift within the meaning of S.122 of the Transfer of the Property Act and has to registered within the meaning of S.123 which says that the transfer must be effected by a registered instrument signed by or on behalf of the donor and attested by atleast two witnesses[9]. It is not permissible to give away oral gifts by the way of ‘Pasupu Kumkuma’.

It is believed that the rule of Hindu Law, where the delivery of possession is considered essential to the validity of a gift has been abrogated by application of Transfer of Property Act, 1882 in regards to Hindu gifts. By virtue of this Act, mere delivery is not sufficient to constitute a gift; movable property being an exception to the rule. Moreover, delivery of the possession is not required to complete a gift either. S. 123 of the Act provides manner in which a gift must be effected.[10]

While discussing the provisions of S.123 the author in the Mulla’s Hindu Law states that:

“This section applies to Hindus. It applied to Hindus even before the amending Act 20 of 1929 for it was made applicable to Hindus by the old section 129 which expressly abrogated the Hindu rule. The section was held to abrogate the rule of Hindu Law that delivery of possession is essential to the validity of a gift.”[11]

In the case of Anathula Sudhakar v. P. Buchi Reddy (Dead) By LRs & Ors[12] which was referred to the apex court to decide the question of law regarding ‘Pasupu Kumkuma”, the court silenced all the debates, discussions and verdicts on overturned judgements. The case was dragged through the courts for over 30 years until the apex court upheld the decision of first appellate court to make the registration of the gifts given by way of ‘Pasupu Kumkuma’ mandatory.

Now, in order to make a valid transfer of property to a daughter at the time of marriage by the way of ‘Pasupu Kumkuma’ it has to be registered as a gift within the meaning of S.123 of T.P Act and u/S. 17 of the Registration Act.

“Gift” defined. — “Gift” is the transfer of certain existing moveable or immoveable property made voluntarily and without consideration, by one person, called the donor, to another, called the donee, and accepted by or on behalf of the donee. Acceptance when to be made. —Such acceptance must be made during the lifetime of the donor and while he is still capable of giving. If the donee dies before acceptance, the gift is void.

[2] S. 3. Definitions- In this Act unless the context otherwise requires-

(ii) in the case of an unmarried daughter also the reasonable expenses of an incident to her marriage;

[9] 123. Transfer how effectedFor the purpose of making a gift of immovable property, the transfer must be effected by a registered instrument signed by or on behalf of the donor, and attested by at least two witnesses.