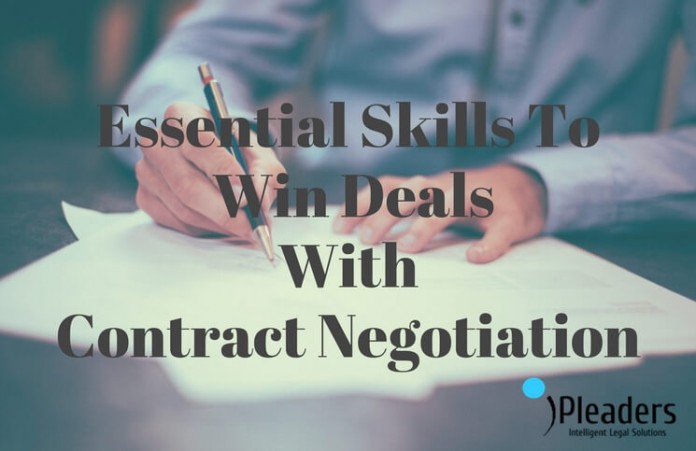 In this blog post, Atul Surekha, a student pursuing a Diploma in Entrepreneurship Administration and Business Laws from NUJS, Kolkata, describes the best ways to improve contract negotiation skills.

Before commenting on the above-captioned subject we must know first what is a contract, types of contract and essentials of a valid contract.

As per section 2(h) of Indian Contract Act 1872 “contract means an agreement enforceable by law”.

[A].Essential Elements of a Valid Contract are as follows:

A Contract Negotiation is important as most of us are involved in negotiating in some form or other on daily basis. The purpose of contract negotiation is seen direct if you can get your interest achieved through an agreement. We need to know how our behavior affects others.

Next thing is that everyone has its unique preferred way of communicating and it may not be my way. Effectively skilled negotiators are those who can change their communication style to meet the needs of the listener.

“The cleaner you are on your interest and goals, the better chance of success increases”

One of the most crucial skills for contract negotiation is that one must learn as much as he/she can about the people with whom he/she going to be negotiating i.e. try to know their negotiating skills, their backgrounds, their interest. Little things do not mean a lot; they can mean everything.

These are the Basic Rules One Must Follow in Order to be a Good Contract Negotiator:

Lease means giving an exclusive right to the user to use a particular place for a period of time for rent.

The first thing which is important in the case of a commercial lease contract is the length of the lease. In the case of small businesses, a term of one year or two year is usually best for small business with an option to renew included.

However, if the business is location dependent i.e. a restaurant, then the businessman will want security. So, a longer term makes sense.

For location based business, which a lessee will acquire from the lessor on rent, will negotiate for the length of the lease because it won’t be possible for a business to shift from one place to another in a short span of time if the location-based business is running successfully.

One of the most important things which must be looked into while entering into commercial lease agreement is the look into hidden costs. In the Gross lease, all costs are included, while in the Net lease, there are costs in addition to rent. Many commercial leases make the tenant responsible for costs such as maintenance etc.

So, contract negotiation must be done with respect to the above clauses.

When a candidate is going for a job, he or she is a salesperson promoting a product as it is up to the candidate that the product is valuable, high quality and superior to anything a competitor could offer.

For Researching the Salary:

As per the Employer, the Various Ways of Contract Negotiation are as follows:

Hire Purchase Agreement is an agreement where the hirer can purchase the goods from the owner by making a part payment and rest in installments. A Hirer shall become the owner of the goods after clearing the last installment. In Hire Purchase Contract, there are two parties, basically, Owner and Hirer.

There are Various Points of Contract Negotiation in Hire Purchase Contract:-