In this blog post, Maanas Tumuluri, a student of Amity University, Noida, explains the crime of homicide, and its various aspects.

Human beings had killed even before history started being recorded for us to see. Today, killing another person is one of the gravest offenses known, with the exception of sedition and treason. The crime is known as homicide i.e., the killing of another human. Culpable homicide and murder are two terms commonly used to define this crime. The differences between these two terms are small but important to the legal system while dispensing justice to the victims of these grave crimes. Homicides can also be justified homicides. As with any other crime, murder is a crime against a person as well as the society as a whole. It disturbs the peace and might cause panic and hysteria amongst the public, especially when a serial killer is thought to be at loose.

Section 299 of the Indian Penal Code 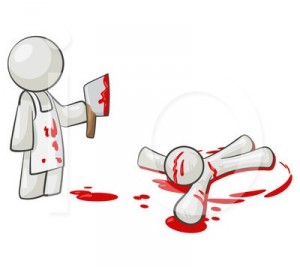 Section 300 of the Indian Penal Code

This section defines murder as ‘culpable homicide is murder, if it satisfies any or all of these following conditions:-

The differences are subtle. In Culpable homicide, there is a definite Mens rea, a malicious intention to kill the victim, and the victim dies, but the person committing the homicide cannot be certain of death, but he/she hopes for it. It is complex to prove this in court, and judgments may run askew depending on the subjectivity of the case.

In Murder, however, there is again, a definite Mens Rea, a malicious intention to kill the victim, and the victim dies, but the person committing the homicide is certain of death, and may even go out of his way to ensure it. (Example: – “A” goes to “B” with the intention of severely scaring & hurting him; In the ensuing scuffle, “A” punches “B” in the abdomen and “B” dies as a result. “A” could not have been certain that “B” would die; this is chargeable under Culpable Homicide, not amounting to murder. However, if “A” had gone to “B’s” house, and forced “B” to consume poison or cyanide, “A” has gone to extreme and thorough measures to ensure “B’s” death, and the crime is chargeable under the crime of Murder.)

Murders usually involve more premeditated action than culpable homicides, and some culpable Homicides may not be completely intentional (Example: – In Salman Khan’s drunk driving case, he had no intention to kill, however, he was undertaking an activity he knew would be dangerous to himself and everyone else around him when he made the decision to drive while under the influence of alcohol. He was charged with causing death by a rash and negligent act – not amounting to murder.) A defendant may argue that he/she took precautions not to kill the victim, but merely injure or hurt, if faced with a charge of murder, to reduce the charge to that of culpable homicide, which carries a lower sentence.

The United States has a good system of classification for murder. Aggravated or highly brutal murders are treated as first-degree murders (With a punishment of life in prison or death), while “normal” murders are charged as second-degree murder (a sentence of up to life in prison). They also refer to culpable homicide as manslaughter, and involuntary manslaughter may be committed when a person has no intent to kill, but his/her actions were a danger to everyone around, and death occurs (Example: – Waving a loaded gun, and accidentally firing a bullet.) (Involuntary manslaughter carries a sentence of up to eight years). Voluntary manslaughter or third-degree murder is a murder done in the heat of the moment; with no premeditation or planning (They carry a punishment of up to fifteen years).

Homicide can also be justified. Most countries allow for self defense, although some countries place higher restrictions on their citizens, to prevent misuse of this privilege. The United States has a “castle doctrine”. The castle doctrine states that a person may use force, up to deadly force, to defend themselves against any intruder, if they are in a place they are legally entitled to be, and are protected from prosecution for such acts. This is most commonly seen when potential housebreakers or thieves are killed by the homeowners. India has a similar law but stipulates that a person may only use force proportional to the force being used against him, and only in situations where there is a fear of grievous injury or death. 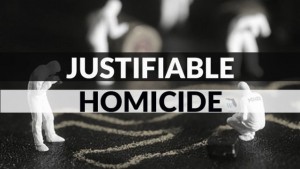 Sections 96-106 all deal with the right of private defense awarded to people in India.  It is far more limited than the rights of self defense given to people in the United States, but with good reason. India has a much higher rate of unreported crimes and a lower rate of convictions. As such, it would be easier for a murderer to claim the act was in self defense, and get away with the crime. However, since they now have to prove apprehension of death, it provides a barrier against misuse. Unfortunately, the opposite is also true. Due to the harsh limitations placed, people who genuinely commit acts in self defense often have to face harsher consequences.

In Indian law, culpable homicide involves the killing of a person regardless of intention. The level of intent is the element that differentiates it from murder. The question of fact is whether the accused knew the victim would die, or if death was uncertain. Murder carries a sentence of life in prison or death, depending on the ruthlessness, if the criminal is a repeat offender, or other factors, at the discretion of the judge.