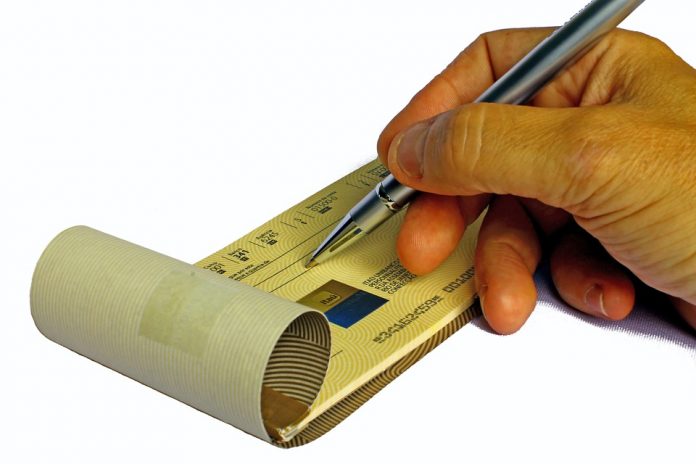 This article on dishonour of cheque is written by Shreedutta Das, pursuing a Diploma in Entrepreneurship Administration and Business Laws from NUJS, Kolkata.

According to Section 6 of the Negotiable Instruments Act, 1881. A “cheque” is a bill of exchange drawn on a specified banker and not expressed to be payable otherwise than on demand and it includes the electronic image of a truncated cheque and cheque in the electronic form.

In other words, a cheque contains a mandate of the drawer to his banker to pay a specified sum of money to the bearer or the person mentioned therein or to his order.

A person holding the cheque can withdraw the amount (only if it is signed). Such type of cheques are very risky and in case misplaced can lead to loss of the amount mentioned on the cheque.

A bearer cheque becomes a crossed cheque by crossing it twice with two parallel lines on the left-hand top corner. Only person name written on it can get the amount transferred to his account.

As the name suggests the account holders name is written on it to encash money in physical form from the branch where he holds his account.

Post-dated Cheques are cheques issued with a future date on it. Once a cheque is issued it will be valid for three months. It is used for business purposes or the making of payment in a future date.

Such cheques are issued by the bank itself and guarantees a payment.

Such cheques can be used for withdrawal of money while travelling. It is equal to carrying cash but one can travel safely without carrying huge amount. They can be encashed abroad where foreign currency is normally acceptable.

Dishonour is of 2 kinds:

Notice of dishonour means information about the fact that the instrument has been dishonoured.

Notice of dishonour is given to the party sought to be made liable and, therefore it serves as a warning to the person to whom the notice is given that he could now be made liable.

Enormous delay in giving notice of dishonour may put an end to the plaintiff’s right in respect of the dishonoured instrument.

NOTICE OF DISHONOUR BY WHOM?

Notice of dishonour is to be given by a person who wants to make some prior party of his liable on the instrument. Therefore, such a notice may be given:

A person suffers a lot if a cheque issued in his favour is dishonoured due to the insufficiency of funds in the account of the drawer of the cheque. To discourage such dishonour, it has been made an offence by an amendment of the Negotiable Instrument Act by the Banking, Public Financial Institution and Negotiable Instrument Laws (Amendment ) Act, 1988.

A new Chapter VII consisting of Sections 138 to 142 has been inserted in the Negotiable Instrument Act.

Section 138 makes the dishonour of cheque an offence. The payee or holder in due course can have recourse against the drawer, who may be held liable for the offence.

Where any cheque drawn by a person on an account maintained by him with a banker for payment of any amount of money to another person from out of that account for the discharge, in whole or part, of any debt or other liability, is returned by the bank unpaid, either because of the amount of money standing to the credit of that account is insufficient to honour the cheque or that it  exceeds the amount arranged to be paid from that account by an agreement made with that bank, such person shall be deemed to have committed an offence and shall, without prejudice to any other provision of this Act be punished with imprisonment [a term may be extended to 2 years], or with fine which may extend to twice the amount of the cheque, or with both.

ESSENTIAL FOR AN ACTION UNDER SECTION 138

Section 138 makes dishonour of cheque in certain cases an offence. Cheque is the most common mode of making the payment. In order to duly protect the interest of its payee, holder in due course, there is an attempt to discourage dishonour of a cheque by making it an offence. These provisions do not cover the dishonour of other negotiable instruments.

The cheque should have been drawn by a person on an account with a banker for payment of money to another person for the discharge, in whole or part, of any debt or other liability.

If the payment by way of cheque is made as gift or charity, it is not the payment for legally enforceable debt or liability. The dishonour of such cheque does not attract the provisions of Section 138 of the Negotiable Instrument Act.

It is also necessary that the cheque should be returned by the bank unpaid.

Dishonour may be because of 2 reasons:

It has been generally held in various cases that dishonour due to the insufficiency of funds has to be interpreted liberally. Dishonour due to the remarks like “Account closed”, “Refer to the drawer” or “Stop payment” of the cheque may be deemed to be covered by the provision contained in Section 138 of the Act.

Within 15 days of receipt of information from the bank about the dishonour of the cheque, the payee or holder in due course of the negotiable instrument, as the case may be, must make a demand of the said amount from the drawer by giving a notice in writing.

Inspite of such a notice the drawer of the cheque should fail to make the payment of the said amount of money to the payee or the holder in due course of the cheque, within 15 days of the receipt of the said notice.

The Supreme Court has held that if it was established that the appellant did not serve a notice on the drawer within the period prescribed under Section 138 of the Act, the acquittal of the drawer is justified.

When the cheque drawer of the cheque countermands the payment, that is it issues the instruction to the bank not to make the payment. On receipt of a valid stop payment order, the cheque must be returned unpaid with the remark “payment countermanded by drawer“

On receipt of the confirmed news of death of account holder, cheques signed by him should be returned unpaid with the remark “Drawer deceased”.

Where a customer is adjudged insolvent, the banker must refuse to pay cheques drawn by the customer.

When a bank receives notice from the liquidator in accordance with the provisions of Companies Act, requiring to pay the balance to liquidator’s account , all the cheques by the companies should be returned unpaid.

A juristic person like incorporated companies and partnership firms are also made liable for the offence of dishonour of cheque described under section 138.

Provided that nothing contained in this sub-section shall render any person liable to punishment if he proves that the offence was committed without his knowledge, or that he had exercised all due diligence to prevent the commission of such offence

Provided further that where a person is nominated as a Director of a Company by virtue of his holding any office or employment in the central Government or State Government or a financial corporation owned or controlled by the Central Government as the case may be, he shall not be liable for prosecution under this chapter.

Explanation- For the purpose of this section –

The Supreme Court has categorically held that there has to be specific averment in the complaint to the effect that such a person was not only in charge of and responsible to the company for the conduct of its business but it was also required to be stated as to how and in what manner he was so responsible.

Section 142 of Negotiable Instrument Act of 1881 deals with cognizance of offences.

LIABILITY OF A DRAWER OF A DISHONOURED CHEQUE

Where a cheque is dishonoured, the legal position of the drawer of the cheque becomes that of a principal debtor to the holder. The holder can bring civil suit just like any creditor to recover the amount from the drawer making him liable as principal debtor.

A drawer of a cheque is deemed to have committed a criminal offence when the cheque drawn by him is dishonoured by the drawee on account of insufficiency of funds.

The criminal liability of a drawer in case of dishonour of cheque is dealt in section 138 to Section 142 of Negotiable Instrument Act 1881.

The maximum punishment for such an offence is imprisonment upto 2 years or fine upto twice the amount of cheque or both.

Where the cheque is drawn by a company, a firm, or association of individuals, the punishment can be awarded to every person who was in-charge of and was responsible for its conduct of business and also to the company.

After the amendment of 2002 and insertion of such penal provision has given relief to the drawee. It has also helped in curtailing the dishonest intention of doing fraud. The steps can be taken as remarkable steps in the banking sector.