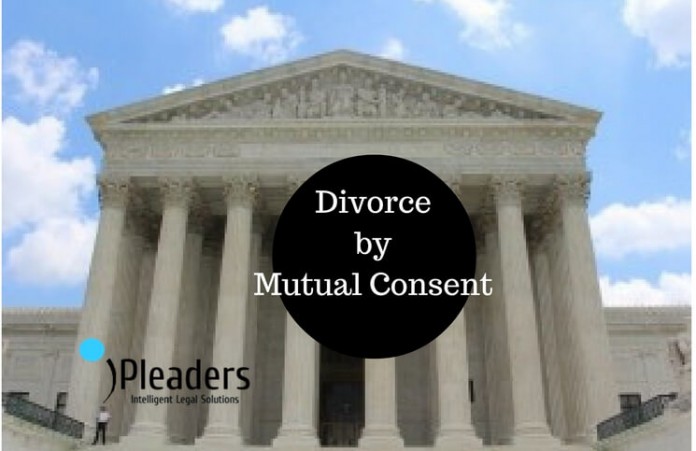 This article is written by Anubhav Pandey, where he has discussed how a couple can divorce his/her spouse by Mutual Consent in India.

It is not disputed that, as per Hindu law, divorce was not recognized as a means to put an end to marriage which was always considered to be a sacrament with only exception where it is recognized by custom.

Hindus after coming into force of the Hindu Marriage Act, 1955 can seek to put an end to their marriage by either obtaining a declaration that the marriage between them was not valid on the grounds (a person already has a spouse at the time of marriage, within prohibited degree of relationship, couples are not sapindas of each other) or other provision of Hindu Marriage Act, 1955.

Under the Hindu Marriage Act, 1955 both the husband and the wife have been given a right to get their marriage dissolved by a decree of divorce with the help of divorce lawyer on more than one ground specifically enumerated in Section 13.

E.g. Where a husband tries to bargain on the conditions of divorce or times where wife out of conspiracy marries a person and demands big price for giving divorce through mutual consent (mostly involved with cases of 498A). [1]

If any party is not available, any such family member of such party may file the statement on his behalf. Once this is done, ‘First motion’ is established.

If the case is withdrawn or the parties do not move to court at the given date(s), the petition stands cancelled. After hearing to the parties and on being satisfied, court may pass a decree of divorce declaring the marriage to be dissolved.

Which court to approach? (jurisdiction)

Court is expected to confine its inquiry on the following aspects-

On making limited inquiry, if the Court is satisfied that aforesaid conditions are fulfilled, the decree of divorce deserves to be passed in such matter.[2]

Where, before  marriage wife had sexual relation with someone else and as a result of it conceived a child, the court allowed for divorce by mutual consent when both the husband and wife agreed to it irrespective of the family opinion and pressure.[3]

What Happens When the Married Couples Are Living Separately for Many Years?

What happens when the married couples are living separately for many years? Does this account for a ground for a valid divorce?

What Happens When Consent To Divorce is Obtained by Force, Fraud or Undue Influence?

What is significant in this provision is that there should also be mutual consent when they move to court with a request to pass a decree of divorce. The court shall be satisfied about the bona fides and the consent of the parties.

If there is no mutual consent at the time of the enquiry, the court gets no jurisdiction to make a decree for divorce. The court could make an enquiry and pass a divorce decree even at the instance of one of the parties and against the consent of the other.

Such a decree cannot be regarded as decree by mutual consent.

Is the Statutory Cooling Off Period of 6 Months Mandatory?

In many important cases, the apex court has taken the view that the statutory period of 6 months is meant as it will provide the couple seeking divorce to rethink on the issue and also will give more time to the family members so that, any chance of reconciliation, if possible, meets its end. [5]

E.g. Where the applicants are already living separately for a period of 6 years. Therefore, when court is fully satisfied on the proved facts that marriage tie should be severed by mutual consent immediately, since the parties have been living separately for more than the time prescribed under section 13-B( 6 months) and that they have been fighting for sufficiently long period and, in such a case, instant decree of divorce can be granted.[6].

Maintenance to Be Awarded In Case of Divorce by Mutual Consent

In cases of divorce by mutual consent the alimony or maintenance is to be fixed by the party through mutual agreement.

Custody of Child After Divorce by Mutual Consent

Since, the divorce is by mutual consent the couple have to come to an agreement as of who will hold the custody of the child.

Bonus Read: What’re the grounds for dissolution of marriage?

Today wives are not ready to merely live at the mercy of their husbands and the members of their family.

In 1978, a dispute as to the choice of matrimonial home had arisen between a husband and wife who were employed at two different places before their marriage. The question was as to whether the right to chose the matrimonial home is vested with the husband only or also with the wife.

“With more and more women taking up jobs and wanting to retain them even after their marriage, the question becomes increasingly important and controversial.”

There arose a dispute because of husband’s low financial status who was in Delhi and on the contrary wife’s excellent financial condition who was in Kanyakumari[8]. A solution of divorce through mutual consent was suggested in such situation.

Divorce by Mutual Consent in Case of Marriage with An NRI

That’s all about “Divorce By Mutual Consent In India” for now. We would love to know your views. Comment Below. And Yes, Don’t forget to share the Article.