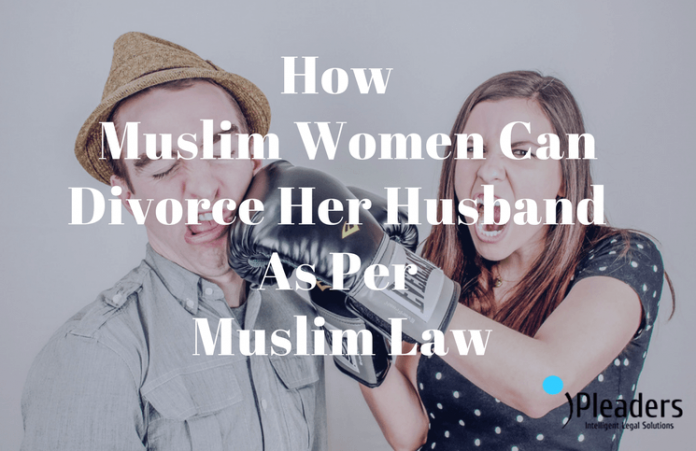 This article that’s written by Anubhav Pandey talks – How Muslim Women can Divorce Her Husband as per the Muslim Law/Shariya law.

In Muslim Sharia law or Muslim law divorce is considered to be evil but sometimes, this evil becomes necessary. Here is a detailed article on what should Muslim women do to divorce with her husband in India.

However, divorce through personal Sharia law has to be under the scrutiny of Quazi, mostly guided under the regulations of All India Muslims Personal Law Board (AIMPLB).

“The doctrine of the delegation of the power of divorce is based on an incident mentioned in the Quran wherein the Prophet told his wives that they were at liberty to live with him or to get separated from him as they choose.”[2]

It is an allegation of adultery to the wife by the husband who entitles her to file a suit for dissolution of the marriage and get a divorce if she proves the charge to be false. According to the Muslim law, till a decision is passed by the Judge, the marriage subsists and there are mutual rights of inheritance if, either should happen to die before the decree is passed.

Here is the procedure of divorce under Muslim law of Lian-

This was the procedure on how to get a divorce from husband by Muslim women in India by the method of Lian.

Remarriage: The remarriage of the couple whose marriage is dissolved by Lian is perpetually prohibited. There is total prohibition of remarriage.

Tafweez and Lian are not the only two modes which confer on the Muslim wife the right to seek divorce and that too through the instrumentality of the Court. Impotency of the husband has also been recognized as a ground for dissolution[4].

On no other ground, however valid or reasonable it may be, the Muslim law allows the Muslim women to snap the marital tie on her own accord. It is in order to relieve the Muslim women from the miseries of misfit marriages, the Dissolution of Muslim Marriage Act 1939 came into existence. Both the customary obligations and statutory obligations are put forwarded on a parallel plane before granting a divorce.

As per the rules, here are the ways in which a Muslim woman in India can divorce under Dissolution of Muslim Marriage Act, 1939 –

Conversion of Muslim Women, Not an Absolute Ground for Divorce Under Muslim Law

The renunciation of Islam by a married Muslim woman of her conversion to a faith other than Islam does not by itself dissolve her marriage, provided that after such renunciation, or conversion, the woman will be entitled to obtain a decree for the dissolution of her marriage on any of the grounds mentioned above. Provided further that, this will not apply to a woman converted to Islam from some other faith who re-embraces her former faith.

There is yet another provision for divorce under Muslim law-

Zihar: This is a mode in which the husband compares his wife to his mother or any other female within prohibited degree giving the right to the wife to refuse herself to her husband until he makes an expiation and in default to apply for a judicial divorce from the Qazi. This form of divorce is unknown in this country and no case of Zihar has come before Courts in India.

Kula: This form of dissolution of Muslim marriage is based upon consensus between the party where the initiative comes from the wife who pays some consideration to the husband to secure his consent by relinquishing her mahar wholly or in part.

Rights of Muslim Women After Divorce

A divorced woman is entitled to –

Common Mistakes which Muslim Women Do After Getting a Divorce

That’s all about How Can Muslim Women Divorce With Her Husband as per the Muslim law. What do you think, are Muslim women equally empowered to grant divorce as described in the Muslim law or there is another side of the coin we’re yet to see?  Comment  below. And yes, Don’t forget to Share.