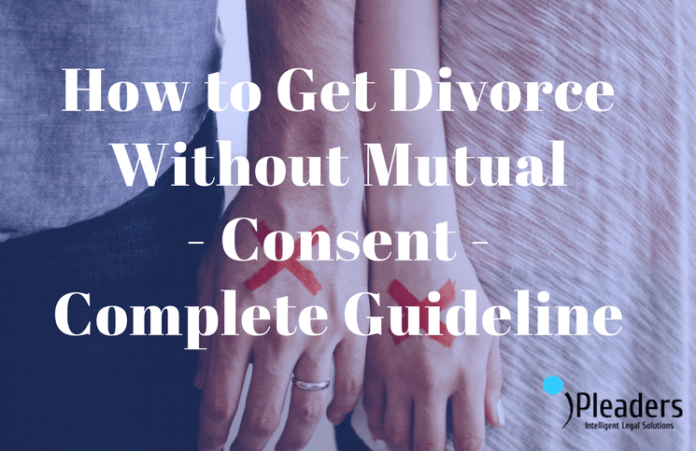 This article on “How to Get Divorce Without Mutual Consent-Complete Guideline” is written by Anubhav Pandey.

In India divorce for Hindus under the Hindu Marriage Act, 1955 can be enforced in two ways-

Suggested Read: Grounds for Dissolution of a Marriage

When one of the party in a marriage is not willing to give divorce then the option left is to fight for divorce in a court of law and such divorce are called contested divorce.

Under the Hindu Marriage Act, 1955, any marriage solemnized, on a petition presented by either the husband or the wife will be dissolved by a decree of divorce on any of the following ground mentioned below.

Grounds Of Divorce Without Mutual Consent Applicable To Both Husband & Wife

Mental disorder is mental illness, or incomplete development of mind. Psychopathic disorder or any other disorder or disability of mind includes schizophrenia.

Psychopathic disorder means a persistent disorder or disability of mind which results in abnormally aggressive or seriously irresponsible conduct on the part of the other party, and whether or not it requires or is susceptible to medical treatment.

Along with the above conditions, either party to a marriage, may also get a divorce without mutual consent for the dissolution of the marriage on any of the following grounds too-

Rights Given To A Wife Only for Divorcing The Husband

A wife under the Hindu Marriage Act, 1955, can contest for divorce without mutual consent on the following grounds-

The Necessary Ingredients of The Section Are:

A single act of voluntary sexual intercourse by a marriage partner with any person other than their spouse is a ground for a decree of divorce without mutual consent under Section 13 (1) (i) of the Hindu Marriage Act,1955.

The birth of a child during the marriage is conclusive proof of legitimacy unless it can be shown that the parties to the marriage had no access to each other at any time when they could have been together.

The contention that, wife has been living separate from him since June,1973 and she gave birth to a child on 1st May,1974 and therefore, it must be held that the wife had voluntary sexual intercourse with a third person, proved to be a valid ground for divorce without mutual consent on the satisfaction of several other considerations.[1]

After the Solemnization of Marriage, Treatment of Divorce Seeker with Cruelty – A Valid Ground for Divorce

Cruelty comprises of both physical as well as mental cruelty. It was formerly thought that actual physical harm or reasonable apprehension of it was the prime ingredient of this matrimonial offence. That doctrine is now repudiated and the modern view has been that mental cruelty can cause even more grievous injury and create in the mind of the injured spouse reasonable apprehension that it will be harmful or unsafe to live with the other party.

The principle that cruelty may be inferred from the whole facts and matrimonial relations of the parties and interaction in their daily life disclosed by the evidence, is of greater cogency in cases falling under the head of mental cruelty.

Thus, mental cruelty has to be established from the facts.[2] Cruelty for the purpose of divorce is to be taken as a behavior by one spouse towards the other, which causes reasonable apprehension in the mind of the latter that, it is not safe for him or her to continue the matrimonial relationship with the other.[3]

In its essence desertion means the intentional forsaking and abandonment of one spouse by the other without that other’s consent and without reasonable cause. It is a total repudiation of the obligations of marriage. Desertion is not the withdrawal from a place but from a state of things.

In order to get a decree on the ground of desertion, the petitioner must establish that the other party has deserted him/her for a continuous period of not less than two years immediately preceding the presentation of the petition without reasonable cause and without the consent or against the wish of the petitioner. [4]

Also, when a Hindu has ceased or ceases to be a Hindu by conversion to another religion, children born to him or to her after such conversion and their descendants, are disqualified from inheriting the property of any of their Hindu relatives, unless such children or descendants are Hindus at the time when succession opens. [5]

The Other Party in a Marriage is of Unsound Mind, Or has Been Suffering Continuously or Intermittently from Mental Disorder – A Valid Ground for Divorce

Its degree must be such that the spouse seeking relief cannot reasonably be expected to live with the other. All mental abnormalities are not recognized as grounds for grant of decree.

If the mere existence of any degree of mental abnormality could justify dissolution of a marriage, few marriages would indeed survive in law.[6]

Where the parties are young and the mental disorder is of such a type that sexual act and procreation of children is not possible, it may furnish a good ground for nullifying the marriage because, to beget children from a Hindu wedlock is one of the principal aims of Hindu marriage where samskara of marriage is advised for progeny and offspring.[7]

Leprosy is an infectious disease, chronic, contagious, resulting in disfigurement, one of the causes of permanent disability in the world and is primarily a disease of the poor.

Leprosy is a ground for divorce and judicial separation under most of the matrimonial laws of the Indian communities. Incurable and virulent form of leprosy is a ground for divorce (or judicial separation) without mutual consent and also the Venereal disease in a communicable form come with refinement and the question as to whether or not the petitioner had communicated the disease to the respondent is now immaterial.

The requirements of this ground are:

Unless the second condition is also fulfilled, the other spouse cannot sue for divorce (or judicial separation) without mutual consent under this clause.

Becoming a chela of a guru does not by itself mean entering a holy order may not always amount to renunciation of the world. The mere fact that a person declares that he has become a sanyasi or that he calls himself or is described by others as such or wears clothes ordinarily worn by sanyasis, would not be sufficient to make him a perfect sanyasi.

Other Party has Not been Heard of as Being Alive for a Period of Seven Years or More by Those Persons Who Would Naturally have Heard of It, If the Party had  Been Alive – A Valid Ground for Divorce

A workable solution was certainly not possible. Parties at this stage cannot reconcile themselves and live together forgetting their past as a bad dream. The lady seeking divorce without mutual consent did her PhD.

In such a situation, court decided in favor of wife and granted a divorce.[8]

After Judicial Separation, No Resumption of Cohabitation for One Year or More- A Valid Ground for Divorce

Judicial separation is when, still being legally married the couples are living separately in separate house.

If there is sexual intercourse of the parties to the marriage, it is no doubt a good ground to presume the resumption of cohabitation but that is not the conclusive evidence for this purpose.[9]

In the relationship of husband and wife, once there is judicial separation without contesting the matter seriously before the court and if the matter is not retrieved, it is in the interest of the justice that marriage be put to an end to as early as possible.

If it is proved by either party that still after a period of one year, there is no resumption of cohabitation between husband and wife and this will be a suffice ground for divorce.

The remedy of restitution of conjugal rights pre-supposes the existence of marriage between the parties. According to Hindu Law, marriage is a holy union and the relationship between the husband and wife imposes upon each other certain marital duties and gives each of them certain marital rights.

The petitioner applying for restitution decree will have to prove two things:

The court may order restitution of conjugal rights if it is satisfied of the truth of the statements made in the petition and that there is no legal ground why the decree should not be granted.

1. When husband is already Married – A valid ground for divorce without mutual consent. Section 494 of IPC says.

Marrying again during lifetime of husband or wife—Whoever, having a husband or wife living, marries in any case in which such marriage is void by reason of its taking place during the life of such husband or wife, will be punished with imprisonment of either description for a term which may extend to seven years, and shall also be liable to fine.

Generally speaking, three kinds of decrees can be obtained, namely- restitution of conjugal rights, judicial separation and divorce, and almost all of those can be prayed for by either spouse, except those under section 13(2), which remedy is available to the wife alone.

Where a husband is already married and still enters into the sacred bond of marriage, it is a valid ground for divorce. This section empowers women as there were many cases where conversion of Hindu men into Islam for the purpose of marriage was observed.

2. Husband guilty of Rape, sodomy, bestiality
Second ground, available only to women for seeking divorce is, when husband since solemnization of marriage been guilty of rape, sodomy or bestiality.

To attract this provision the marriage should have been solemnized before she attained the age of 15 years and she has to repudiate the marriage after attaining that age but before attaining the age of 18 years. The conditions for a Hindu marriage are informed in Section 5 of the Hindu Marriage Act, 1955.

Section 5(3) places requirement that the bridegroom should have been completed age of 21 years and the bride 18 years at the time of marriage. Noteworthy, it is that the breach of such condition does not render the marriage void under Section 11 or voidable under Section 12.

That’s all about “How to Get Divorce Without Mutual Consent” for now. Comment below your view. And, Share the article.