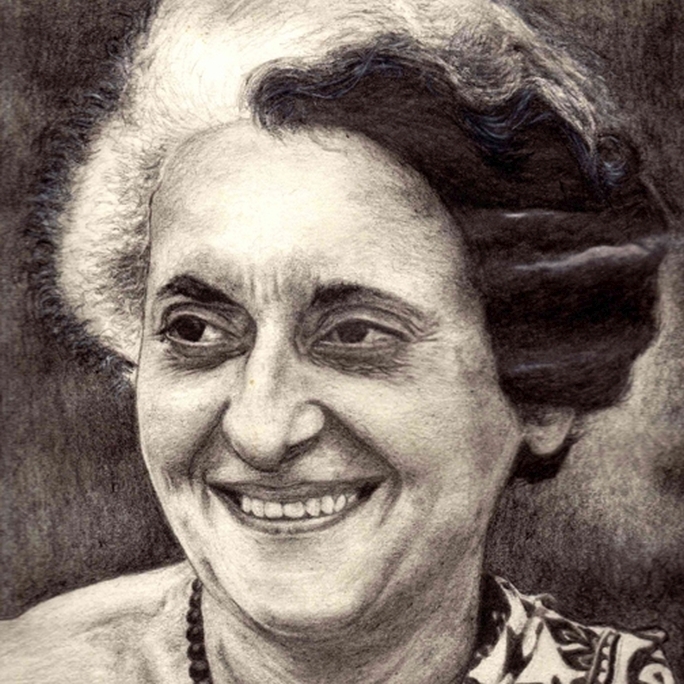 This article is written by Saumya Saxena, a BBA LLB student at Symbiosis Law School, Noida of Batch 2022. This article analyzes the case of Indira Gandhi v. Raj Narain (1975), the case that shook the entire nation and led to emergency.

General elections were held in India to the 5th lok sabha in 1971, wherein Indira Gandhi campaigned heavily for herself and her party and steered the Congress to come out victorious by securing 352 seats out of 518 seats in the said elections. Raj Narain, the leader of Ram Manohar Lohia’s SSP stood against Indira Gandhi in the elections of Rae Bareilly in Uttar Pradesh. Raj Narain was extremely confident of his victory in the elections, he ventured to such an extreme as to take out a triumph rally before the declaration of results.

Raj Narain was very disappointed when he lost the elections with a huge margin. Raj Narain did not accept the defeat and decided to appeal to nullify the election, accusing Indira Gandhi of adopting corrupt practices during her election campaigns. On 24th April, 1971, he challenged the Prime Minister’s election by filing a petition in the Allahabad High Court, putting allegations on Indira Gandhi of violating the election code enshrined in the Representation of the People Act of 1951 as her election campaigns were assisted by many government officers which also included the armed forces and local police. He also alleged that Indira Gandhi had used government vehicles for her election campaigning, and had distributed liquor and blankets amongst the voters so as to influence them and had also exceeded the campaign expenses limit which was Rs 35,000.

After the Allahabad High Court declared Indira Gandhi’s election void on grounds of corrupt practices, Indira Gandhi made an appeal against the decision. The Supreme Court was on vacation at that time so she was granted a conditional stay. Thereafter, emergency was declared due to internal disturbance. In the meantime, Indira Gandhi passed the 39th constitutional amendment, which introduced Article 392A to the Constitution of India. Article 392A stated that the election of the Prime Minister and the Speaker cannot be questioned in any court of law, it can only be challenged before a committee formed by the Parliament itself. Thus, barring the Supreme Court from deciding Indira Gandhi’s case. Therefore, the constitutional validity of the 39th amendment was challenged.

Constitutional validity of clause 4 of Article 329A

The Hon’ble Supreme Court applied the basic structure doctrine laid down in the case of Kesavananda Bharati v. State of Kerala. It expressed that Clause (4) of Article 329-A needed to be struck down on the ground that it hampers the standards of free and fair elections which is a piece of the basic structure of the Constitution. It abolishes the forum without providing for another or going into the debate discussing the validity of the election and further endorses that the said dispute will not be governed by any election law and that the validity of the election will be absolute and not subsequently be at risk to be pounced upon, and it abolishes both the privilege and the remedy for test of validity of the election. According to Article 329 (b) election disputes are supposed to be presented before any authority as provided by the law. The only way to resolve any dispute in an election petition is by a judicial view, and Article 329A(4) takes away these rights and ought to be struck down.

The 39th constitutional amendment was passed when several members of the Parliament were not present as they were arrested under preventive detention. The amendment destroyed judicial review and separation of powers which are a part of the basic structure. Article 368 does not empower the parliament to take decisions in any dispute by making constitutional amendments. Article 324A (4) is said to be in the domain of the judiciary and is not included under Article 368. The amendment destroyed the notion of equality; there should be no difference between people holding high offices and the people elected to the Parliament.

Raj Narain claimed that many opposition leaders were under preventive detention due to which they could not vote in the parliamentary proceedings or give their opinions when the 39th amendment was passed therefore the act needs to be struck down. The court found the matter to be related between both the Houses of Parliament and that the court cannot interfere in the matter and decide its constitutional validity. It was also noted that the President did not authorize any detention under Article 352 and 359 respectively.

In the matters questioning constitutional validity the statue depends entirely on the existence of the legislative powers and the limitation laid down by Article 13, there is no other prohibition and the Parliament had acted within the powers of Article 368 when it framed the election laws. In addition to this, the Parliament has the powers to restrict the limits on election expenses along with stating which expenses can fall under the purview of the same and which cannot. It can likewise choose what is meant by the office of profit, what comes under corruption and the status of the members. If there has been a retrospective effect to the legislative amendment, it is accepted as a normal exercise which is tough to implement but is inevitable. In such cases, wherein the law has a retrospective effect and if the law was operational in the past, there can be no discrimination or unfairness on this ground of being retrospective in nature.

Validity of the election of Indira Gandhi

The Supreme Court held that “candidate” in Section 123(7) of The People’s Representative (Amendment) Act, 1975, was characterized as a person who files the nomination papers. It was then held that Indira Gandhi filed for nomination on 1st February 1971, therefore any help or assistance that she took from the government officials and the armed forces before this date did not amount to a corrupt practice.

Raj Narain alleged that Yashpal Kapoor had given a number of speeches amid 7th January 1971 to 25th January 1971 to support Indira Gandhi, however, the court found no proof to support that he gave those speeches with the endorsement of Indira Gandhi. The Court held that as per Section 77 of the People’s Representative Act, 1951, Expenditure incurred by a political party for the purpose of the election of the candidates of the party is not included in the election expenses of the candidate. Similarly, participation in the programme of activity organized by a political party will not be included in the election expenses of the candidate.

The constitutional bench gave its decision on 7th November 1975. The apex court upheld the contention of Raj Narain and declared the impugned clause 4 of Article 329A unconstitutional.

In the words of Mathew J. Article 329A(4) destroyed the basic structure of the Constitution viz. the resolution of an election dispute by ascertaining the adjudicative facts and applying the relevant laws. He was of the opinion- “a healthy democracy can only function when there is the possibility of free and fair elections, The impugned amendment destroyed that possibility and therefore violated the basic structure of the Constitution”.

Chandrachud J. found that “The 39th amendment is violative of the principle of separation of power as it intently transferred a purely judicial function into the hands of the legislature. Further, he was certain that the said amendment is also violative of Article 14 as it created inequality for certain members against others”.

Ray C.J. found another basic feature violated by the said amendment i.e. rule of law whereas Justice Khanna found that “The violation of norms of free and fair elections. The bench also found the said amendment violated the principles of natural justice i.e. audi altrem partem since it denies the right of fair hearing to the one who is challenging the election of the members mentioned under the amendment. Democracy is a basic feature of the Indian Constitution. Parliament does not have the power to pass a retrospective law validating an invalid election. This exercise is nothing but an example of despotic use of unrestrained and unfettered power”.

Therefore, due to various reasons, the court struck down the 39th (Amendment) Act, 1975 as it was unconstitutional and violated the basic structure of the Constitution. And the Supreme Court set aside Allahabad High Court’s judgment, it freed Indira Gandhi from all the corruption charges and acquitted her, thereby making her election valid.

In the wake of experiencing the thinking given by the judges for this situation, and in the wake of encountering the establishment history of this case, I feel that the judgment notwithstanding the way that it was theoretically right, anyway it was flawed on the grounds of justice, equity and good conscience. Indira Gandhi was assisted by government officers and had profited the administrations from the military and the aviation based armed forces amid her election battles. The Allahabad High Court uprightly charged her under Section 123(7) of The People’s Representative Act, 1951, for taking the help of government officials and the armed forces for her election campaigns and hence put a banned her from contesting in elections for the coming six years, declaring her election void.

Indira Gandhi took an unconditional stay order from Justice Jagmohan Lal Sinha, and made an appeal to the Supreme Court, in the meantime she imposed emergency due to which she easily got rid of the opposition members, censored the press and suspended some fundamental rights in the name of national security. She detained the main opposition leaders and hence easily passed the 39th Constitutional Amendment. She passed the People’s Representative(Amendment) Act,1974 and the Election Laws (Amendment) Act, 1975, which is now referred to as the Amendment Act, 1974 and 1975.

It was by reason of these Amendment Acts, that Indira Gandhi could easily get away. She abused the powers conferred upon her as the Prime Minister for her own advantages. The amendments took care of all the charges that were put on her by the Allahabad High Court. She likewise made sure that Yashpal Kapoor’s resignation was held authentic by Section 8(b) of the Amendment Act, 1975, by adding Explanation 3 in Section 123(7) of People’s Representative Act. These two changes made it simple for her to demonstrate that she didn’t take any help from Yashpal Kapoor while he was a Gazetted officer.

I along these lines feel that the Supreme Court was unmindful in managing this issue. Indira Gandhi had abused her powers to adjust the very laws that charged her of being corrupt and the Supreme Court stayed quiet, and when Raj Narain argued for equity, all that Supreme Court could do was to give him long superfluous reasoning of how the issue was out of its ward.

The Hon’ble Supreme Court was well aware of the fact that Indira Gandhi had made the amendments to satisfy her political exigencies and had unconventionally imposed emergency to save herself from being proved guilty. Raj Narain had to wait for years and what he got was unwanted reasoning. Yet, the Supreme Court upheld the constitution in some way as it struck down clause 4 and 5 of Article 329 being violative of the basic structure.

To Know More About the Case

If one wishes to know the minute details of the case then they can read the book titled- “The Case That Shook India” written by Prashant Bhushan. Prashant Bhushan is a well-known public interest lawyer in the Supreme Court has written this book in which he has discussed the nuances of the case in a detailed manner. The book demonstrates even the slightest details as young Prashant Bhushan had himself experienced the court proceedings because he was the son of Shanti Bhushan, the lawyer arguing from Raj Narain’s side.