This article is written by Harshit Bhimrajka currently pursuing B.A.LLB (Hons) from NLU, Patiala. This is an exhaustive article which talks about the laws concerning environmental pollution in India, detailed study of Section 133 of CrPC, and an overview of some other provisions. It also talks about how the other laws concerning environmental pollution don’t supervene the old law of the Indian criminal machinery i.e. Criminal Procedure Code, 1973.

India is a home for around 1.3 billion people which is nearly a fifth of the world’s population. Population is the major problem of large scale environmental pollution and resource depletion in the country. Environmental Pollution refers to the contamination of the components of the earth’s atmosphere which led to an adverse effect on nature due to the pressure of technological developments and population. Thus, the Indian Constitution provides the right of a person to a pollution-free environment under Article 21 (Right to life and personal liberty).

The Stockholm Declaration, 1972 was perhaps the first guidelines or international principles to conserve and preserve the human environment. This declaration made the States adopt legislative measures to protect the environment. In accordance with this, the Parliament of India amended The Indian Constitution in 1976 by inserting a new article, i.e. Article 48A which directs that state should endeavor to protect and mitigate the environment. After 1972, a new zeal was seen in the Indian judiciary as well as the Indian legislature to interpret and make new laws for the protection of the environment. The Indian Penal Code, 1860, and the Criminal Procedure Code, 1973 (hereinafter CrPC) deal with the remedies and concept of the various nuisances, out of which one is environmental pollution. In this article, we will deal with the provisions under CrPC regarding environmental pollution.

The Code of Criminal Procedure, 1973, or the Criminal Procedure Code is the law that deals with the procedure of administration of substantive criminal law in India. It came into force on 1st  April 1974, which contains 484 sections that have been divided into 37 chapters.

Chapter X of the CrPC, “Maintenance of public order and tranquility” provides efficacious, preventive, and expeditious remedies for public nuisance cases which include air, noise, water pollution, and unsanitary conditions. It contains the procedure for the enforcement. The entire corpus of 13 sections of CrPC under Chapter X i.e. from Section 133 to 144A is devoted to mitigating public nuisance.

As discussed in the earlier part, the provisions under chapter X of CrPC provide speedy and effective remedies against public nuisance among which environmental pollution is one.

Section 133 deals with the conditional order for removal of the nuisance, it empowers a District Magistrate and Sub-Divisional Magistrate to stop the nuisance on receiving such information.

Section 134 deals with the service of summons or notification of order. It can only resort when order is not served in the manner provided.

Section 135 deals with the person against whom the order is addressed to obey or show cause. Under this section, two contingencies are envisaged that:

It also provides that the person against whom the order is made should be given a reasonable opportunity to be heard and answer the allegations made against him.

Section 136 deals with the penalty if the person against whom the order is made failed to comply with Section 135 of CrPC. The penalty is prescribed under Section 188 of the Indian Penal Code, 1860.

Section 137 deals with the procedure where the existence of public rights is denied. It also applies to those cases only where there is no decision about the existence of right by any competent civil court and strong evidence in support of that against any magistrate.

These are some of the provisions under Chapter X of CrPC, the main and the utmost important provisions are under Section 133, which is discussed further in detail.

Section 133 of CrPC provides that a sub-divisional magistrate and district magistrate or any other executive magistrate to whom the powers are granted by State Government can make a conditional order to remove such kind of nuisance on receiving information about the same or the report of any police officer. If the person who is creating nuisance objects to the order then the order can be made absolute by the concerned magistrate. Any order made by the magistrate under this provision shall not be questioned in any civil court. In the case of Govind Singh v. Shanti Sarup (1978), the word nuisance was defined in very liberal terms and it includes the disposal of substances, the construction of structures, the conduct of occupation, and trade, and confinement or disposal of any dangerous animal.

If the imperative tone of this section is read with the punitive tone of Section 188 of IPC (provides punishment for a maximum of six months and a fine extendable up to one thousand rupees) it makes the prohibited act a mandatory rule.

To invoke this section, it is not required to have a large number of complaints or protest against the nuisance. It can be invoked on simply receiving a report of a public officer or other information that is deemed to be fit as a piece of evidence. This pronouncement was made in the case of Krishna Gopal v. The State of M.P (2016).  In this case, a complaint was registered against a glucose factory which was causing air pollution due to the discharge of steam in the air resulting in fly ash and noise pollution. This all cumulatively caused discomfort to the residents of that locality.

To understand the application of the section in a facile manner is to simply understand the conditions required as given in the case of Suhelkhan Khudayar Khan v. State of Maharashtra (2003), these followings conditions have to be satisfied for providing a sanction under this section:

The nature and the scope of this section is explained by the judges in the case of P.C. Cherian v. State of Kerala (1981). In this case, the Sub-Divisional Magistrate of Kottayam directed the stoppage of mixing of carbon in two rubber industries which were situated in the industrial area. As there was no dissemination prevention equipment. The High Court sentenced that the dissemination of carbon black in the environment is causing a public nuisance and also affecting the respiratory organs of the people.

Some examples of independence of Section 133 are as follows:

It is clear and evident from the above discussion that the laws governing environmental protection are in existence even before the enactment of the Environment (Protection) Act and other specific laws by the Indian Legislature and Judiciary. They use the criminal machinery for the protection of the environment to make sure that problems regarding pollution can be solved rapidly and economically. Environmental pollution is one of the biggest doom for our society and to safeguard the environment as well as the lives of the public at large should be our prima facie concern.

Justice V.R Krishna has well said that “it is not how many laws we have, it is how effectively we implement”. Though in the present situation we have so many laws concerning the environment but provisions like Section 133 of CrPC help to achieve this goal efficiently, and expeditiously. These laws are not enough to preserve our environment, the public support and awareness is also the key component for better environmental governance and also for the abatement of the environmental nuisance.

The Space as Their Son

The Universe consisting the Three

Any kind of damage done to any one of the Three

Throws the Universe out of Balance” 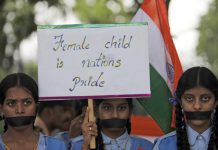