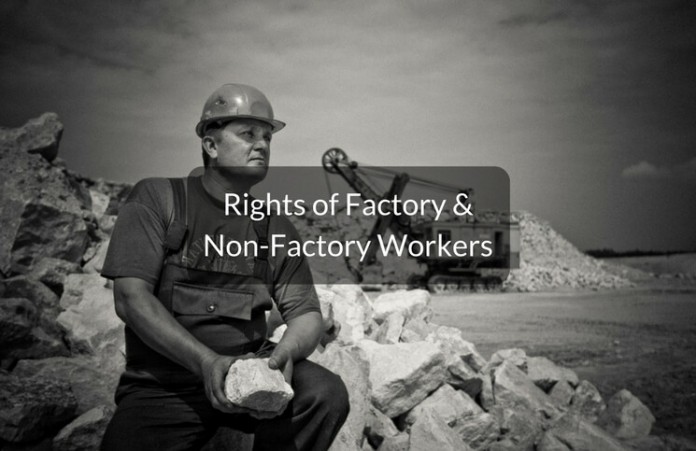 There are two statutes which govern the rights of factory and non-factory workers such as working time, overtime, leave and holidays, health and safety and other related matters in India.

Difference Between Factory and Non-Factory Worker

Factories Act applies only if 10 or 20 people are employed in a manufacturing process to aid the infrastructural growth of an industry. Whereas, the non-factory worker comes under the ambit of Shops and Establishment Act of different states. This applies to shops, a commercial establishment where trade, business or profession, etc. is carried or where goods are sold or establishments such as education, hotels etc. are run.

The benefits and rights provided by the two acts namely, Factories Act, 1948 and various state act on Shops and Establishments make provision for the basic rights and facilities to be provided to the workers.

But in practical life, this provision is not followed. Workers in a factory are made to work for long hours which usually goes for about 12 to 15 hours a day and 7 days a week with no holiday.

In few areas, the condition is even miserable. Factory workers are made to work like bonded labor.

After every five hour period, each worker has to be given a break or rest interval for half an hour at least. This will not only benefit productivity but will also improve the working conditions of the worker.

Without break, the physical labor will result in affecting their personal health, which in turn will affect their family and a whole vicious circle will affect the society.

Special Provision for Working Time of Women and Children –

An establishment which does not come under the provisions of Factories Act are governed by the Shops and Establishment Act of particular states in which the establishment is located.

The Shops and Establishment Act contain a provision for a working time, overtime, weekly off days, leaves, casual leave, sick leave, spread over, rest intervals and other such basic working rights. Some state act specifically provides that the provision for the Shops and Establishment Acts of their state, would not apply to persons employed in positions of management or in a confidential capacity, subject to a cap on the percentage of such employee, or to employees whose work is inherently intermittent.

While some state act only provides for particular provisions would not apply to such employees or persons whose main work involves traveling. The government of different states have also issued notifications exempting certain establishment or certain provision of the act.

For instance, the government of Delhi has adopted the following guidelines for Interval for rest and meal under their Shops and Establishment Act, 1954:

Leaves and Holidays for Factory Workers

Every factory worker who has worked for minimum of 240 calendar days is entitled to annual leave with wages at the following rates:

The following will be considered as the days for which the worker has worked in the factory for the computation of the period of 240 days or more but the worker cannot earn leaves for these days:

The example in Delhi, Punjab Industrial Establishment (National and Festival Holidays and casual and Sick leave act) is applicable to workers working in factories.

According to the provision of this act, every worker working in a factory is entitled to casual leave for 7 days and sick leave for 14 days in a year.

Therefore, all the leaves and holidays not availed by any worker in a calendar year will be carry forwarded on one condition. The number of such days shall not exceed 30 in the case of adults and 40 in the case of a child.

Duties of the Owner of the Factory Toward Factory Workers

These are the following duties towards factory workers to be taken care by the ultimate owner of the factory who has control over the affairs of the factory:

In every factory where a thousand or more workers are ordinarily employed and where hazardous activities that might risk life is carried on, the occupier of the factory shall employ safety officer to look into these things and work for providing a safe and secure environment for workers to work.[3]

No worker in a factory shall –

Do you think the Rights & Obligations bestowed upon the factory workers are helping them to grow? Drop your comments below & share the article.