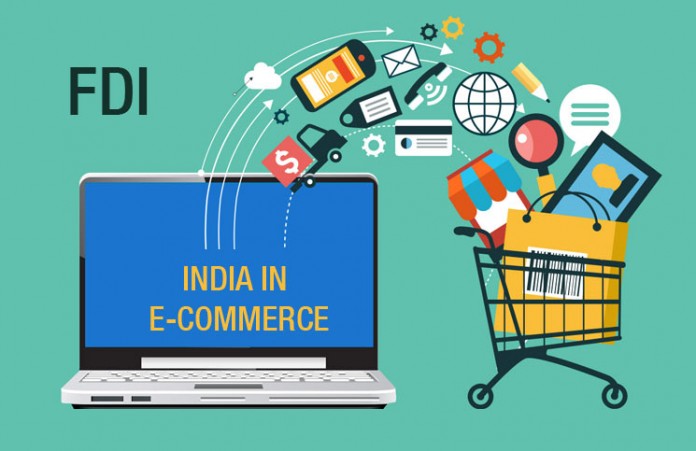 In this blog post, Poonam Sharma, an Advocate in Bangalore and a student pursuing a Diploma in Entrepreneurship Administration and Business Laws from NUJS, Kolkata, analyses the FDI policy of India with regards to the E-Commerce sector.

What Is Meant By FDI?

Investment in a country by individuals and organisations from other countries forms an integral part of international finance. Such investment can be made in the form of portfolio investments (acquisition of securities) or direct investment (creation of productive facilities).[1]

Foreign Direct Investment is the outcome of the mutual interests of multinational firms and host countries. According to the International Monetary Fund, FDI is defined as

‘…an investment that is made to acquire a lasting interest in an enterprise operating in an economy other than that of the investor. The investor’s purpose being to have an effective voice in the management of the enterprise.’[2]

Why is FDI better than other forms of capital inflows?

FDI is considered to be better than other forms of capital inflows for various reasons:

Although FDI is primarily undertaken for private gain it can have many favourable effects on the host country especially in cases of less developed countries:

Production units in developing nations usually utilise outdated equipment and techniques that reduce the productivity of workers substantially leading to the production of low-quality goods. As a consequence, the ability of domestic producers to compete with foreign producers is also reduced. FDI easily solves this problem through the embodiment of advanced technology as an investment.

Though FDI proves to be a blessing to host nation, it is not free of its own set of drawbacks. The adverse effects of Foreign Direct investment can be summed up as follows:

The Central Government recently permitted 100 percent FDI in the E-Commerce sector. However, this was applicable to only to e-commerce marketplaces while FDI in B2C e-commerce has been disallowed in India.

In order to understand what it exactly means and the repercussions of such a decision, it is essential to understand as to what is meant by e-commerce.

What is E-Commerce? What does it entail?

The Department of Industrial Policy and Promotion (during the recent declaration of 100 percent FDI in the e-commerce sector) defines e-commerce as the buying and selling of goods and services including digital products over a digital and electronic network.[8] Now e-commerce is of two types: Marketplace based model of e-commerce: Providing of an information technology platform by an e-commerce entity on a digital ad electronic entity which can act as a facilitator between buyer and seller.[9]

Now there are certain conditions under which a Foreign Direct Investment can be allowed in the B2C E-Commerce Sector:

In addition to this, an e-commerce entity is not permitted to derive more than 25% of the sales affected through its marketplace from one vendor or their group companies. Further, the Government has put a rider that e-commerce marketplace cannot, directly or indirectly, influence the selling price of products. This essentially means companies will not be able to offer huge discounts to consumers anymore, which had become the unique selling proposition for all online retailers.[11]

What does prohibition of FDI in B2C form of E-Commerce mean?

It essentially a means that FDI is disallowed in actual e-commerce, that which allows online retailers to own inventory and hence the consumer experience from start to finish. It also prevents smaller online retailers from raising FDI and leaves them beholden to marketplaces for scale.

Why is FDI discouraged in B2C form of E-Commerce?

There are several reasons for the same: