This article is written by Kashish Khattar, a 4th-year student at Amity Law School, Delhi. Here he has discussed the aspects related to L&T’s takeover of Mindtree Ltd.

This particular hostile takeover bid is said to be the first in the Indian IT sector. L&T’s public announcement of a hostile takeover has put everyone on the edge of their seats, most importantly, the promoters of Mindtree Ltd. Things can swing in any direction as the plot thickens. It is as exciting as it can get for a person who is following up with the events.

ICICI Securities and Khaitan & Co. are advising Mindtree on the open offer evaluation.

But how is this a hostile takeover?

The promoters of Mindtree Ltd made a strong statement condemning the hostile takeover bid. Further, they highlighted that this takeover is ‘value destructive’ for the shareholders.

Who are the promoters and what is their stake?

Typically, promoters of a company have been there since the inception of the company and have even helped in the incorporation and drafting of various constitutional documents such as the articles of association and memorandum of association. The promoters of Mindtree include Krishnakumar Natarajan who is the executive chairman, Subroto Bagchi who is the co-founder, Rostow Ravanan who is the CEO and Parthasarathy N.S. who is an executive vice chairman and COO of Mindtree Ltd. They hold a 13.32% stake in Mindtree. 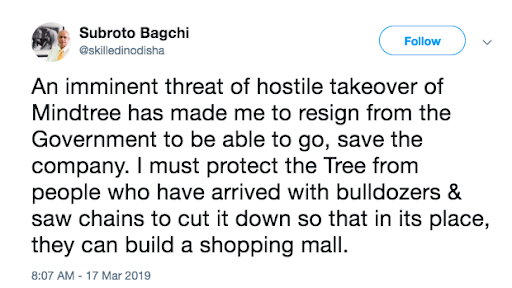 This makes it clear that the takeover intended by the L&T group is going to be hostile as Mindtree is in no mood to be acquired by any group. However, the promoters cannot decide upon the fate of Mindtree because they hold a mere 13% stake in the company.

Why the resistance to such a takeover?

The takeover of a small company by a big company is ideally seen as a dream come true, the bigger company offers better resources to the company and the shareholders at large.

However, the management believes that it competes with some of their technical offerings directly with L&T and cites competition tensions as the main concern. Further, there have been talks of different cultures at the organisations and little to no synergy between costs and revenue.

The promoters believe that this acquisition will make them lose control over the company which could grow rapidly in the coming times as the clients start accepting more technology in their businesses. Further, they argue that many large IT service providers had failed to get integrated into larger groups after M&As.

Why Mindtree? What does L&T gain from this 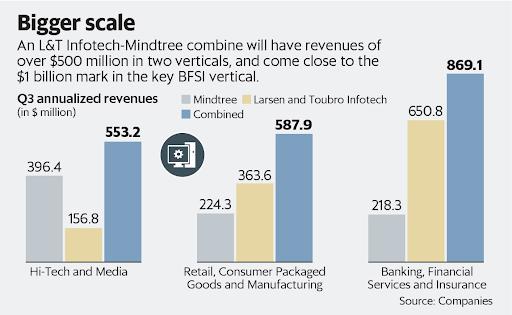 The answer to the question lies in the picture above. Mindtree Ltd has USD 1 billion in revenue. Further, it has fast-growing digital revenue which signals the adoption of newer technologies like AI, cloud, big data and analytics by customers. This is what makes Mindtree a particularly attractive target.

Mindtree isn’t really doing well as experts claim, Microsoft being their only biggest client and share prices not being up to the mark. Expert says that minority shareholders were already looking for a change in the leadership of the company. They also believe a fight like this – between the founders and investors is only going to benefit the shareholders.

L&T already has two horses in the IT race, L&T Infotech aka LTI which is an IT services firm and L&T engineering services. Mindtree will be the third software service company in the L&T portfolio. Mindtree is said to benefit from a larger client base and wider product offerings under a common roof, this will also give higher returns to the shareholders of Mindtree. In all, amongst the 3 IT companies, L&T will have a revenue of around USD 2.5 billion which will let L&T group bid for bigger outsourcing contracts from global clients.

Who is VG Siddhartha? What is his shareholding pattern?

The above image illustrates the shareholding pattern of Mindtree Ltd. before the supposed takeover talks started.

Siddhartha is known for his Cafe Coffee Day retail chain, he is also said to be the biggest exporter of coffee. He has his business interests ranging from hospitality and real estate to logistics. Siddhartha was quoted saying in 2012 that Mindtree will be a USD 2 billion company in 8 years. He had thought of selling out his stake in 5-7 years with an annual interest of 25% with his investment. Keeping true to his word and giving the management ample room of comfort, he sold his stake at Rs 980 per share to L&T.

VG Siddhartha used to own up to 20.32% stake of Mindtree Ltd before it was bought by L&T.

Further, VG Siddhartha has made a handsome exit from Mindtree and is said to have made a profit of Rs. 2,858 Cr. News reports say that this stake sale was done mostly so that Siddhartha would repay his Rs 300 Cr owed to the income tax authorities.  Siddhartha had talked about selling his stake since the last 10 months when he had left the company’s board. The founders were in talks with friendly investors like KKR, Baring PE Asia and Chryscapital who could buy out Siddhartha and would allow the founders to manage the company.

Why didn’t Siddhartha sell to Mindtree?

The answer to this question lies in another company who is in huge debt – IL&FS. Siddhartha was forced to sell his stake in Mindtree because of the liquidity squeeze which was triggered because of the defaults in IL&FS. The lenders came calling for their loan repayment against which his Mindtree stake was pledged. The repayment deadlines were coming close and he needed a way out. Reports suggest that the shares were already pledged with the banks, the buyer would have to pay the banks for those shares before they could be bought. The transaction would even work if there was an agreement between the banks and the potential buyer that the banks could hold the shares before the transaction takes place.

What were the promoters trying to do?

L&T has made it clear that it has no intentions of merging the company’s business with L&T Infotech, the approach is to increase the shareholder value. However,

Further, through L&T’s public announcement, the market purchase of 15% comes with a conditional offer that the 20.32% sale from Siddhartha should have been approved by the regulators of the country, only then will they be going ahead and buying an additional stake in Mindtree. This can be seen as a contingency plan by the group. Their public announcement states that this condition is only attached until they get approvals from all the regulators including the US and German antitrust regulators. However, this can be seen as a person who knows what he’s doing. L&T’s legal finesse has been appreciated when they chose not to trigger the open offer regulations of the takeover code even when their plan was to acquire 66% of Mindtree Ltd. The publicly traded engineering giant is playing safe with its investment. Several articles have suggested that this was done to save face if the takeover does not go through.

L&T has already been a part of a transaction where they did not come out as winners. In 2008, when Satyam Computer Services was bought by Tech Mahindra which bid higher. L&T’s plan was to buy shares of Satyam at different phases where it bought shares for Rs 80 a piece. The plan was to make the average share price about Rs 40-50. Tech Mahindra came as the winner when its board bid at Rs 58 a share. Tech Mahindra bought a majority stake of 51% in the company.

What kind of takeover regulations were involved in the transaction?

L&T has used the supposed loopholes in the SEBI’s Takeover Regulations. The group intends to read Section 3(1) and 4 of the code together for a turnaround. L&T after buying Siddhartha’s stake is now one of the biggest shareholders in the company who used to own 20.32% of Mindtree. They are not gaining control, per se.

How does that help?

After the public attacks from the promoters of the company and the never seen before reluctance of the employees complaining about the takeover through their tweets in #MindtreeMatters. L&T has tried to smoothen the process by stating that there is nothing hostile about the deal and they have only invested in Mindtree through Siddhartha’s stake.

What is Mindtree doing about it?

Mindtree convened a board meeting on the 20th of March, 2019 after L&T announced that they have acquired Siddhartha’s 20% stake. Further, L&T announced that they will buy up to 15% of the company’s stake from the market through their broker. L&T was evaluating a share buyback plan which was then dropped in the subsequent meeting.

Further, Mindtree on the 26th of March formed a panel of independent directors to look into the open offer by L&T. The panel is expected to give its recommendations by 10th May 2019.

The subject of shares with dual ownership of rights (“DVR”) has also cropped up in this takeover. This basically helps the promoters raise investment without diluting their stake in the company. The kind of shares which give you higher dividends but no voting rights. This is also seen as a way of preventing hostile takeovers. SEBI has recently come out with a consultation paper on the said issue. The issue is said to give a new way of structuring deal for startups. However, the DVR structure is only beneficial to startups where the founders are trying to build something to sell. When it comes to a company like Mindtree, it is a given that it is not a startup and has to give up the stake to grow its business.

Who is the supposed referee of the match? What’s next?

There were concerns regarding the antitrust aspect of the said takeover. However, the CCI has approved the said merger in record time. CCI typically takes more than 21 days. The merger now awaits approval from the United States and German antitrust regulators as Mindtree has clients over there.

In my opinion, Mindtree’s fate has been sealed after the recent CCI approval of the said merger. However, this takeover is said to change the corporate governance structure of the country. The recommendations from the independent directors are expected to be out by the 10th of may, the open offer starts from the 14th of may.

There are not a lot of things that can go wrong in the takeover aspect as of now. However, only the time will tell if the Mindtree board was right about their sense of independence being taken away and if this takeover will be an overall good fit for the L&T group.