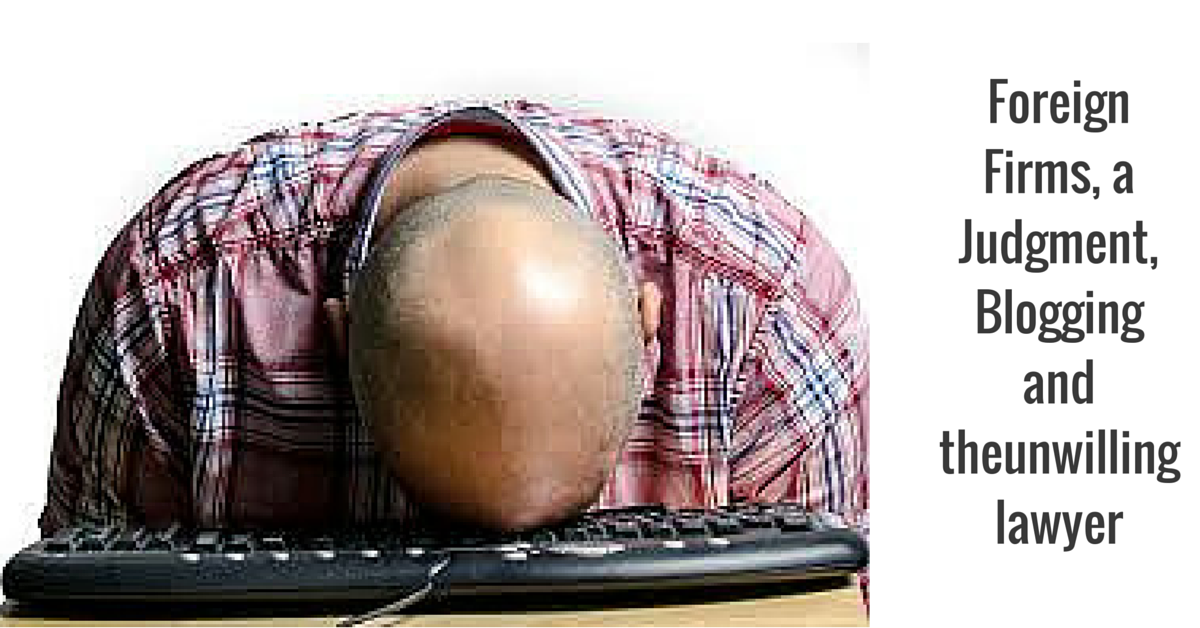 This is being republished from A First Taste of Law, which has now shut down. Have you heard of theunwillinglawyer? Yes, with no space in between, at blogspot.com. He has been writing some fabulous stuff about law schools and NUJS in particular under that pseudonym, and never revealed his identity. I would like my readers to discover some of his posts simply because they are interesting, extremely analytical, and has the two rare qualities I value (like everyone else sensible): rarity/exclusiveness and usefulness. In fact, that makes his stuff very valuable.His blog is also a test case for all those law students out there planning to start a blog that can help them reach an audience and build a brand of their own. If you want to write a blog that is read more than by few of your friends, the key is in being relevant in what you write, and still being able to make your content exclusive.

Recently theunwillinglawyer wrote on a very thorny issue of foreign law firms in India and the judgment that came from Delhi High Court on the subject. I believe that gives me a perfect opportunity to introduce him to the readers of my blog if they are not already familiar with him. Click on this link to read his original post. You will find a few questions I asked him.

I have interned at around 6 firms (most of them having pan-Indian presence) in last 4 years at law school, many times I have been asked to assist associates in drafting etc., in one such internship I came across an affidavit filed by a foreign law firm on behalf of the client at NY District Court, while I went through the affidavit I found that the quality as well as presentation greatly varied from the draftings that we get in India even at the SLP level in SC, what I want to say is that (unfortunately) the work performed by foreign firms is better qualitatively than their Indian counterparts, (disclaimer: my exposure to the work done by foreign firms is only a handful draftings and very few briefings).

If foreign law firms are allowed in India the obvious effect would be that the big four in Indian legal scene (AMSS, AZB, Trilegal & Khaitan) would have to match up to the quality of work done by even the puny entrants (and the magic circle), this would mean that legal sector as whole would get a boost in terms of work culture and quality. Law students would get to work at international standard and would be anointed with global work practices (not just all-nighters, but also how to compose proper ‘contents page’ of documents and not just scribble the page numbers). Thus, entry of foreign law firms would definitely help India legal sector to judge itself in global standard and would ensure better service to consumers who can pay.

Given the buzz surrounding the subject after the Lawyers Collective case and the hype which is generated in law school after every announcement by law minister about liberalizing the legal sector, I decided to learn more on the subject and the more I read I became enamored with the idea (and also the constant flip-flop by the govt.), so I decided that I should share a personalized summary of the case with others as a starting point to, may be, pique interests of others also.

Well, the judgment hung on the interpretation of term ‘practice the profession of law’. The court held that it would include non-litigious matters like drafting, advising client etc. I looked at dictionaries and a thesaurus for the terms and personally find no fault with the literal interpretation given by the court, practice the profession would not mean just practice in court but all aspects relating to profession that would definitely mean advising etc.

I am personally a great advocate of minimal control by bar association in legal field except in the area of entry in profession and professional ethics, I think there should be bar exam and to ‘practice the profession’ in India all should pass the bar no matter whether he passes out from NLS or Yale. The law as it stands today is alright it just needs a bit of fine-tuning, also a starting point to open up legal sector would be to use the principle of reciprocity, if US allows NLU grads to practice in the US without bar exam, our government should also allow the same but if the US keeps its market closed behind bar exam is it too much to ask India to open its legal field to all LLB pass outs from anywhere in the world.

I would like to remind that as of now BCI does allow foreign LLB pass outs to sit for an exam on Indian law and then enroll in Indian bar, in that way one cannot say that Indian market is closed. Also are the foreign firm lawyers afraid that they won’t be able to crack that entrance, I am sure that they can easily pass the test, so why the fuss, also say if Allen & Overy wants to set shop in Mumbai, why not recruit Indian lawyers from India and use its foreign people as shadow partners, that way they can get around the law (this idea is not mine and was actually proposed by a friend in a discussion with a partner of a mid-sized foreign law firm). So if I may reiterate the law is fine it just needs a bit of tuning.

People interested in legal affairs and legal education will find my blog interesting. Also, those who want to read about the law in a light hearted manner are my target audience. I suggest my peers that are law students to read my blog as many posts are on legal education and examination patterns, the changes and my (mostly) neutral take on them.