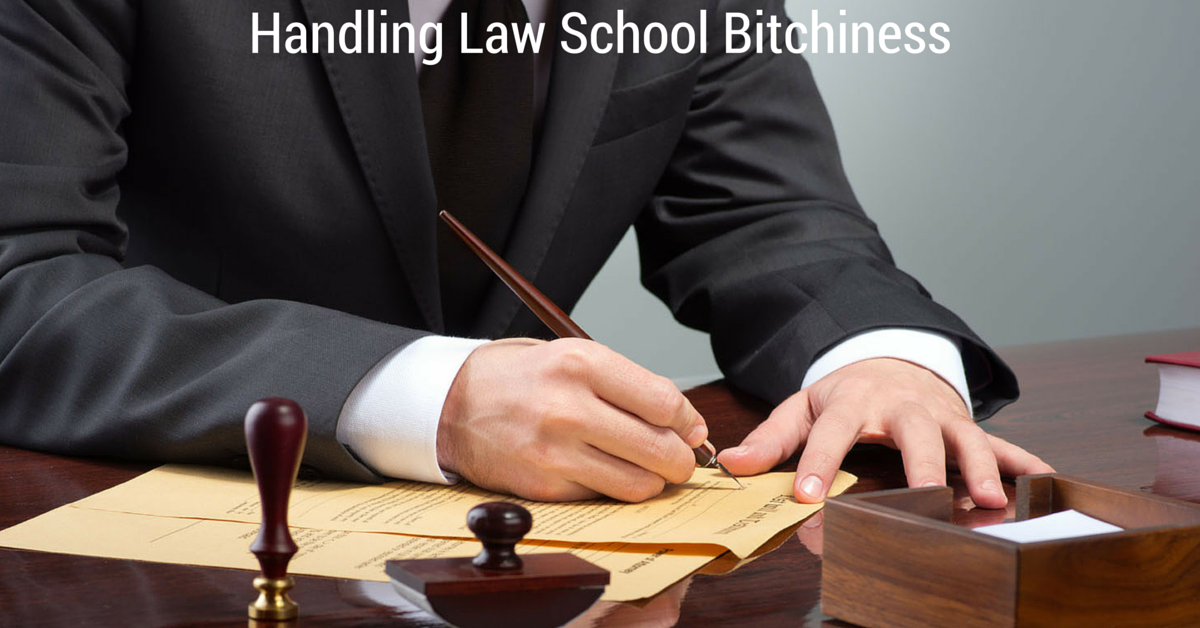 You will always meet, a bunch of people in law school, whose part time occupation is being a bitch (no gender specification intended). These people are afflicted with the obsession of passing unwarranted comments and judgments about others. These are the people many of us are indifferent to. Some of us want to break their jaws while many want to throttle them to death.

Asking, why do they do that, would be funny. It is like asking, why do elephants have trunks and why does a dog bark!

Still, if we try to find out reasons, it would just zero down to either their insecurity- leading to the need to grind others to the ground. It makes them feel that they can stand out, it solaces them or maybe we can just write it off to their sadistic nature.

We might pity their joblessness or their obsession with others, and pays them little attention, but at one point or other they sort of succeed in punching a pin on you. It ruins your good state of mind, you end up being angry or sad for no good reason, and the negativity of the law school bitches rub off on your soul.

How can you prevent that from happening?

I read a story about tit for tat in my school English Book though the details have faded from my mind, but the message of the story is something I remember quite distinctly. If somebody is trying to screw around with you, give it back to them, left, right and center. If saving yourself from unnecessary comments and the other similar jazz means giving the shrewd glance and applying some crooked tactic to save your ass or kick the person in the ass who is screwing up with your life, means being a bitch, then just be one. Flaunt your bitchy side. It just functions this way. Feel free in asking such people to eat up some makeup so that can bring some beauty to their inside as well.

Though, I like to follow the first principle, some people are so filthy that you can’t possibly bring yourselves to talk to them. Even though they are a nobody to you, they would keep on poking their nose in your life in all the ways possible under the sun. The funny thing is many a times they would bitch about you to your best friends which as obvious as it is, you would come to know. Trying to understand their logic and mindset is futile, maybe because they don’t have any. I personally love to maintain distance from such fatuous people. Dealing with them is like hitting your head on the wall. The instant message: if you pay heed to them, it would just affect you. The only way you can deal with them is when you have bought some brains for them, which I’m afraid is generally not available in the market.

I have seen law school bitchiness taking a toll on many peoples’ lives. While many wonders that what wrong did they do to get such wicked people to cling to their neck, while the others follow the tit for tat principle. Whatever you may think, as far as the doing part is concerned, the bottom line is, don’t succumb to it. If you act like a doormat, no wonder, people would walk over you. Whether you act over such bitchiness or ignore it, just make sure, it does not affect you or drench you with the shower of negativity, that you just lose what you have in you. I guess, one rule that works well in law school is to remember “you are the best, who the hell cares about the rest!”How do you deal with bitchiness, in any case? Share your wisdom in the comments.
– By Srishti Aishwarya, 4th year, NUJS