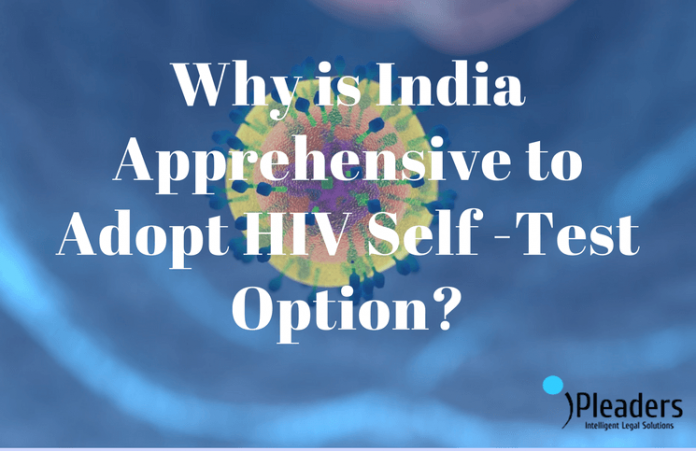 This article written by Ishita Mehta highlights the argument as to why India is against the regulation of HIV Self-test option.

The World Health organization has recommended HIV self-test option and it wants to take it for further use so that, there is more knowledge about the HIV treatment and improvement access.

India is a progressive country and though there have been many steps taken by India to make HIV testing accessible and free of cost still, many people are unaware of their status of infection. If they are unaware of the infection, they also have the risk of unknowingly transmitting the disease. Now, the main question is, why do we need HIV self- test option?

HIV Spreading Its Roots All Across

What is HIV Self-Test Option?

Since a long time we have seen discrimination against HIV-positive people, despite creating a large amount of awareness. Henceforth, leading to more risk of getting HIV infected. According to the World health organization, HIV self-test option is more private so, people don’t have to face any kind of discrimination in their lives due to this.

But, of course, everything comes with its own challenges. Everything needs accuracy and a proper result to bring up a whole function like this. The accuracy level is only up to 93% which doesn’t make it fully reliable. There are possibilities of negative testing also and people should be more aware of it.

Why is India Against HIV Self-Test Option?

India does not allow HIV self-test option currently but it is trying to evaluate a technique where it can find it feasible to evaluate the proposal.

Above we read about a few concerns on why India does not want to adopt HIV self-test option. One of the major concern is financial viability.

The commencement of the testing method in India starts with a screening test. This involves two different kinds of tests-

The first test will be the card test, which is the same as the self-test except that you have to go to the clinic and get it done under a proper supervision.

The second test is the Elisa test. This test is usually done in the bigger hospitals. Elisa generally means that a positive test can be a false test whereas, a negative test is a negative test. After the results of Elisa test are given, there are more screening tests which are taken place if, the result comes out to be positive. At the end, the patient needs to go the PCR for a final confirmatory test.

The confirmation test is necessary for all these patients to take. It doesn’t matter if they have taken a card test or the Elisa test.

What India needs is the awareness, especially to differentiate between AIDS and HIV. Some people think that if they have HIV they are going to die, which is a misconception. The officials have not been able to educate people effectively and therefore they are not able to put a right message for the people.

HIV self-test option is used to diagnose the deadly disease at the earliest. It is an initiative taken by the UN health organization as people are still missing out on life-saving treatments. This option is put forward just to make people more aware and to educate them about HIV and how it should be treated.

There should be the accurate use of technology for early diagnosis. India will sooner or later definitely adopt this option. This is definitely a better way to reach out to more patients who are unaware of the problems and to the people who are not diagnosed properly.

HIV self-test option is a huge step to promote and empower well-being of the people and to encourage them to take steps to reduce the possibilities of getting infected at the earliest. It is shown in the analysis that men are more likely to attain the disease than women. It is also shown that people who are in a relationship of the same gender, transgender are less likely to attain HIV.

People should start getting themselves tested to maintain a happier livelihood. There are a few people who do not want to get tested just not to face the fear of the status of HIV positive. The public health fight against HIV should be carried on as it is a curable disease and the necessary steps should be taken to treat and prevent the disease at the earliest. These measures should have a positive impact and those who are affected by the disease should get proper help as needed.

What do you think about HIV Self Test Option? Leave your views in the comments box below. And yes, Don’t forget to share.