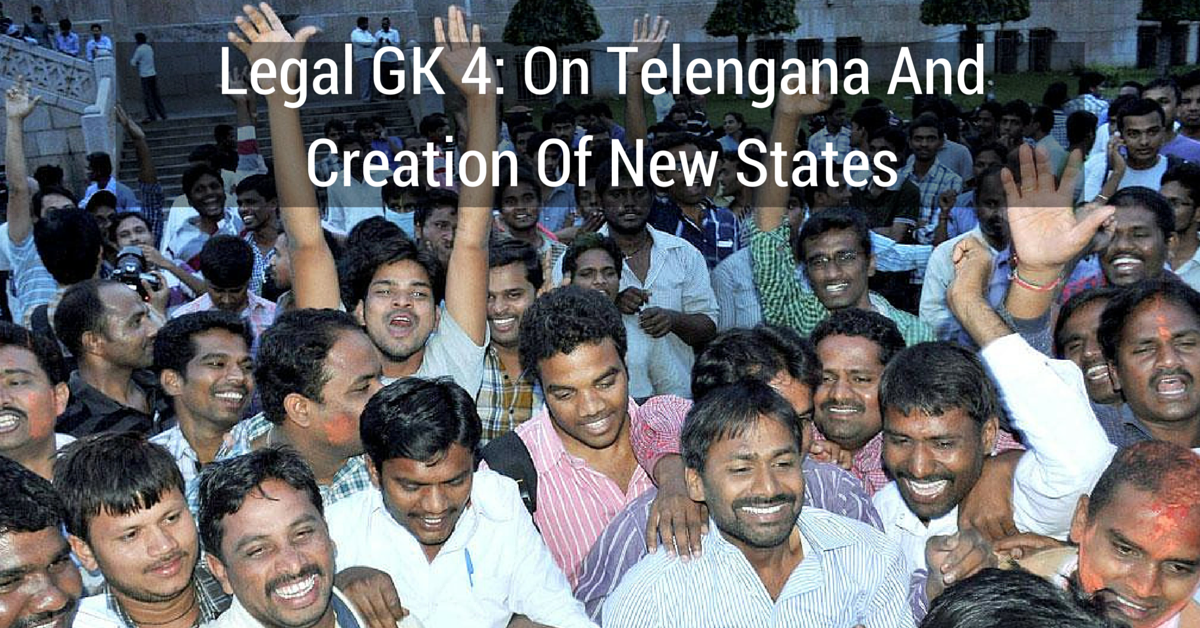 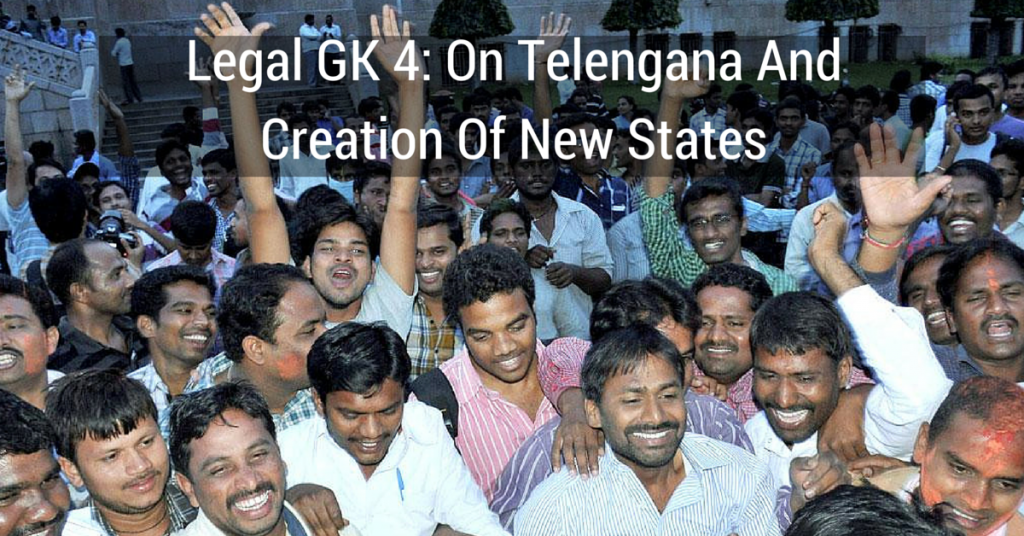 The cry for separate Telangana state has been raised for quite some time, and it went very violent in 1960’s during Chenna Reddy’s time. However, the agitation stopped with a change in Chief Ministership and on a promise of development.

In the past few days, we have witnessed one of the biggest political dramas in AP. over Telengana. It is not that something like this has never happened before. The demand for Telangana has been going on for quite some time now, just like in the cases of Khalistan and Gorkhaland. However, this time around the Congress has agreed to the demand, at least momentarily. This has churned a lot of political debates, which makes certain trivia and few legal and constitutional issues important for those planning to write any sort of competitive exam that involves legal or constitutional or even plain GK. We are ready to help, as usual, and this post has been carefully researched and written by Anwesha Pal of the 4th year from NUJS.

Telangana or Telengana or Telingana is a region of Andhra Pradesh state in India. The region lies on the Deccan plateau to the west of the Eastern Ghats range. On December 9, 2009, the Government of India announced its decision to separate Telangana from Andhra Pradesh as a new state.

The separation of Andhra Pradesh itself from the Madras Presidency happened with the formation of The States Reorganisation Commission, constituted in 1956, which was assigned the task of demarcation on the basis of linguistic lines. Consequently, Andhra, Rayalaseema and Telengana fell within the larger Pradesh though there were dialect differences in between them.

The reasons such as educational disparities, irrigational disparities, unemployment, budget allocation, infrastructural issues arguably, have led to a proposition for a separate state of Telangana.There are certain special provisions enshrined in Constitution of India to cater to the needs of the state of Andhra Pradesh.

Article 371D talks about special provisions with respect to the state of Andhra Pradesh.
Here is the entire section, but it is enough to remember what this article generally talks about. No one will expect you to know this article in detail.

The 32nd Amendment (1973) made certain changes in the Aricle-371D of the Constitution and provided certain reservation and facilities for the people of Telengana in Andhra Pradesh. It also authorised the President to establish a Central university in Andhra pradesh and the expenses of the same would be available from the University Grants Commission. Constitution (32nd Amendment) Act, 1973 also implemented a 6-point program for Andhra Pradesh.

Formation of a new state:

The formation of a new State in India usually has to follow a procedure as has been laid down under Article 3 of the Constitution of India. Article 3 has been quoted thus.
3. Formation of new States and alteration of areas, boundaries or names of existing States.—Parliament may by law—
(a) form a new State by separation of territory from any State or by uniting two or more States or parts of States or by uniting any territory to a part of any State;
(b) increase the area of any State;
(c) diminish the area of any State;
(d) alter the boundaries of any State;
(e) alter the name of any State:
Provided that no Bill for the purpose shall be introduced in either House of Parliament except on the recommendation of the President and unless, where the proposal contained in the Bill affects the area, boundaries or name of any of the States, the Bill has been referred by the President to the Legislature of that State for expressing its views thereon within such period as may be specified in the reference or within such further period as the President may allow and the period so specified or allowed has expired.
Explanation I.—In this article, in clauses (a) to (e), “State’’ includes a Union territory, but in the proviso, “State’’ does not include a Union territory.
Explanation II.—The power conferred on Parliament by clause (a) includes the power to form a new State or Union territory by uniting a part of any State or Union territory to any other State or Union territory.

However, in the recent past if one studies the issue of separation of States on the basis of socio-cultural identity and linguistic grounds, the issues of states of Jharkhand and Chattisgarh are sure to be of prime focus.

The most recent case under Article 3 being that of inclusion of Haridwar in the new Uttaranchal State, later named Uttarakhand. A bench of Justices S.B. Sinha and Cyriac Joseph put the seal of legality over inclusion of Haridwar in Uttarakhand, ruling that parliament, under Article 3 of Constitution, is supposed to merely consult the assemblies of the affected states and need not concur with their views or opposition to the alteration of their boundaries or reduction in their territory. The bench gave its ruling dismissing a lawsuit by a group of Haridwar residents who had challenged Section 3 of the Uttar Pradesh Reorganization Act, 2000, which provided for inclusion of Haridwar town and the entire district in the new Uttaranchal state, later named Uttarakhand, ignoring an Uttar Pradesh assembly resolution to the contrary. The apex court ruled: “The power to introduce the bill (to create a new state) is with parliament. Consultation with the (affected) state legislature, though is mandatory, its recommendations are not binding on parliament.” This observation of the Court merely reiterates the careful examination of Article 3.

Remember that Sikim as a state was acceded to India by a constitutional amendment in 1975.

Conflicts in the past over formation of new states in India

In the past India has witnessed many conflicts regarding the formation of new states. The issue of Khalistan is one such example. In India all states were created on the language basis but Punjab was not declared a Punjabi State. Sikhs started demanding for a Punjabi state and Sikhs launched a peaceful morcha. Nehru strongly opposed the movement.

Another example is that of Gorkhaland. On April 6, 1947 two Gorkhas, Ganeshlal Subba and Ratanlal Brahmin, members of the undivided CPI (Communist Party of India) submitted a quixotic memorandum to Jawaharlal Nehru, the then Vice President of the Interim Government for the creation of Gorkhasthan – an independent country comprising of the present day Nepal, Darjeeling District and Sikkim (excluding its present North District) in the line of Pakistan.

Then during the ‘80s Subash Ghising raised the demand for the creation of the state of Gorkhaland to be carved out of the hills of Darjeeling and areas of Dooars and Siliguri Terai contigious to Darjeeling, with a large population of ethnic Gorkhas. The Gorkhaland movement took a violent turn in the 1980s when Gorkha National Liberation Front (GNLF) issued a violent demand for statehood, which led to the death of over 1200 people. This movement culminated with the formation of Darjeeling Gorkha Hill Council (DGHC) in 1988.

Fragmentation of states: whose interest does it serve?

In conclusion it can only be observed that instead of promising a separate state for each ethnic group, the Government should majorly focus on the development of the concerned regions. The Telangana issue has been an agenda on the political manifestos of almost all the political parties of Andhra Pradesh. The Congress and TDP are sitting on the fence on the issue, while the BJP with the Left parties are in favour of Telangana, demanding its formation.

It was the death of Potti Sriramulu which forced Nehru’s hand into acceding to the demand of creating states based on language. Now Andhra Pradesh itself is being driven to fragmentation by the Telangana movement. If the Centre accedes to the division of Andhra Pradesh it will definitely open floodgates of such demands. It will increase the number of capitals and ministers in the country, but there is serious doubt about what development will take place. Take a look at Jharkhand if you want to know what I am talking about.