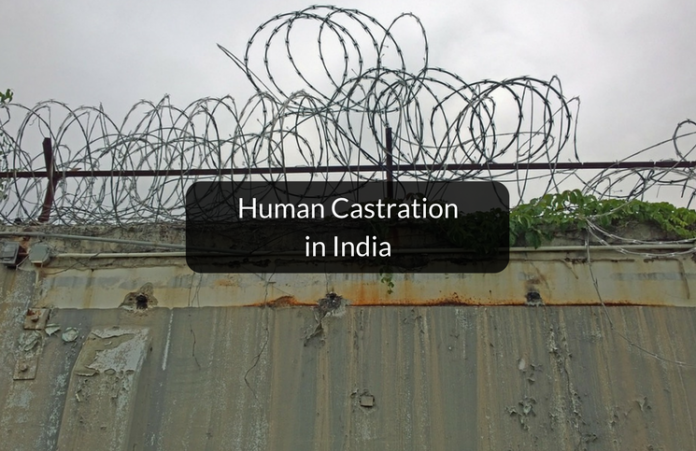 In this blog post, Suprateek Neogi, from Rajiv Gandhi National University of Law, Punjab talks about human castration and why it’s not a punishment for rape in India.

What Is Human Castration

Castration is a medical process to decrease or finish the sex drive of an individual, irrespective of their gender. Castration was an extremely painful process before the advent of modern science and medicine. But now scientific advancement can dull the emotional and psychological pain that is felt by the process, if done as a punishment.

Castration is usually looked at in a very negative light in modern society. Germany is infamous for legalising of castration as a punishment for rape throughout the country, and a few states in the United States (like California and Florida) have legalised the same. But all governments continue to use the punishment sparingly.

Freud based his entire theory of socialisation on the sexual urges felt by humans. Although the theory has been criticized on many grounds, it proves one important point. The mere fact that without deeper research, a large majority believed in this shows how much importance a layman gives to sex.

But another thing that is highly frowned upon by society is rape. Rape is a crime which violates a woman’s body, causes immense psychological trauma, shows contempt for the entire womanhood and is simply inhuman. No matter how disgusting forcibly castrating an individual may sound to a layman, rape definitely is worse.

As the name suggests, it basically involves physically cutting off the genitals. Types of physical castration-

Chemical castration is the process of injecting chemicals called hormone suppressors into the patient. For men, the most common drug used is medroxyprogesterone acetate.

According to the American Journal of Criminal Law, 1990, the process of chemical castration “reduces the production and effects of testosterone, thus diminishing the compulsive sexual fantasy. Formerly insistent and commanding urges can be voluntarily controlled”.

Punishment – Why and How Much

Although the Indian Penal Code does not define the term punishment, the Oxford Dictionary defines it as a means to make an offender suffer for an offence. Punishment is inflicted to teach the offender a lesson, and make sure that he or she does not commit the crime or offence again. Another aim of punishment is for the instance to act as an example for any would be criminals. With respect to human castration as a punishment for rape, this is where the dilemma arises.

Some jurists and human rights activists argue that castration is justified as a proportional punishment for the guilty, and even if it is not, it acts as an example, and also a deterrent for any would be rapists.

The opposing view is that human castration is too harsh for any human, irrespective of the wrongful act or crime committed. In India, human castration is not allowed as a punishment for rape, no matter how heinous the act is, as it is considered violative of Article 21 of the Indian Constitution, “Right to Life”. The Universal Declaration of Human Rights and Article 21 both, get right to live with dignity under the ambit of right to life.

In the case of Parhlad and Ors v State of Haryana, the court called an offence of rape as basically an assault on the human rights of the victim. It was seen as an attack on the individuality and physical sovereignty of a woman. It is important to note that according to Section 375 of the Indian Penal Code, only a man can commit rape, and only on a woman.

Section 375 of the IPC, in short, defines rape as any involuntary and forceful penetration without the woman’s consent into the woman’s body parts like the vagina, urethra, mouth or anus.

The Justice Verma Committee report on Criminal Law (the committee was constituted after the brutal Nirbhaya gang rape case in December 2012 in Delhi) recommended a wider definition of rape to include “any penetration of a sexual nature”. Further, the report said that death penalty for sexual offences should be abolished, and instead should be replaced by stricter punishments and enhanced sentences.

Section 376 of the IPC states that the minimum punishment for an offence of rape in India is of seven years, which may extend for life. The sentence is awarded as per the severity of the act, how heinous it is, past criminal history of the accused and so on.

In India, as mentioned before, cannot legalise castration as a punishment as it is violative of Article 21. Article 21 states that “no person shall be deprived of his life or personal liberty except according to procedure established by law”.

Jurists have included the right to live with dignity and the right to privacy under the ambit of the Article. This is because the Supreme Court felt that a liberal and wide interpretation of Article 21 is essential for the law to keep in touch with the modern society and its needs.

Human Castration as a Punishment Under Indian Laws

The proponents of human castration as a legal punishment for heinous rapes interpret Article 21 in a different way from what Indian jurists are doing right now. They claim that the “procedure established by law” can include castration. The act of raping and violating the physical space of a woman (children, in many cases) is considered so inhuman an act that human rights are not considered by society.

Castration, both physical and chemical, is a process which would decrease the testosterone content, and hence, the sexual urges felt by the rapists. Studies in the United States have shown that in some states where chemical castration is legalised, castrated offenders show extremely low rate of showing sexually perverse tendencies.

Larry Don McQuay, a convicted sex offender, in Washington Monthly (1994) said “What is barbaric is what I have done to so many children; refusing to castrate me is barbaric to the children I will molest. [Chemical castration]… is considered ‘cruel and unusual punishment.’ But no punishment is crueller or more unusual than the pain I have caused my victims. Voluntary castration is not unconstitutional, but no state allows it“.

The argument of Larry Don McQuay is echoed by a few sex offenders who volunteer for castration instead of imprisonment.

Indian Constitution, common law principles and almost every known law state that the punishment should be proportional to the crime or wrong committed. The debate arises whether castration is proportional to the crime? Opponents argue that it is not, and it is not even addressing the root cause of rape. Most of rapes do not happen due to lust or sexual desires. Rape is also an expression of power and domination. Rape shows male chauvinism in its extreme sense. It is used as a tool for humiliating the victim.

Does castration affect the misogyny deeply rooted in the mind of the rapist? No, it does not.

Further, it is possible for a castrated man to regain the use of their sexual organ through intake of testosterone as steroids. The effect of castration varies from individual to individual. A lot of individuals are known to undertake regular sexual activities after the operation, even without stimulants. This defeats the purpose of castration in the first place.

Ohio, California, Illinois and Arkansas have legalised voluntary castration. But why would a culprit want to opt for the procedure? One answer is because to wash away their guilt. Larry Don McQuay is one of those. Another reason is that castration is an easy way out of rigorous imprisonment. These states give castration as an option against rigorous incarceration. In such cases, the purpose of justice is defeated. The rapist can easily roam the streets soon after being convicted. Does that make the world a safer place?

These two legal systems differ in their views about why are criminals punished. The arguments for and against castration as a punishment is based on this broader debate.

The difference between them can be easily contrasted with the following example:

Castration is seen as a symbol of retributive policies, although India follows a reformative system. This further weakens the argument for castration as a punishment.

Human castration as a punishment for rape is a highly emotionally charged issue, and it is understandable why that is the case. The victims of rape go through unfathomable emotional, physical and psychological pain. From the third person’s perspective it is easy to rationalize and theorise about the topic. But what the public needs to understand is that when you are the victim, your perspective towards everything changes. You tend to look at the world from a different viewpoint.

In the Nirbhaya gang rape case, the victim was harmed in ways which is too disgusting and scary to talk about without getting a chill down your spine. Imagine one of the culprits living in your locality. Would you not feel safer with the him being scientifically incapable of sexual relations?

That is the thought process behind the advocacy for castration as a legal punishment.

The opponents of castration do their best to think logically. Or that’s what they think. As mentioned before, having a neutral viewpoint in this issue is very difficult.