Have you ever wondered how artists give their music for usage on websites, apps and softwares like Gaana.com, iTunes, Spotify, YouTube etc? What is the exact procedure? What is copyright and how does it affect you as a listener? Is it illegal to download free music? Are torrents illegal, or is it their content which makes it controversial? What do we press “I agree” to while downloading/installing files from the internet?

This article will answer all the above-mentioned questions and more.

The creators and producers of the music compositions own the exclusive copyrights to their works. They are permitted to give selective or absolute (depending upon their discretion) rights to a third party for usage of their composition for commercial purposes.

A copyright is basically the legal right to print, publish, perform, film, or record literary, artistic, or musical or any such creative material for a span of a few years, or even lifetime.

In simple terms, a music license agreement is a deal between a third party and the creator(s) for use of the composition, in exchange for money.

The third party is said to have obtained a “licence” for the usage of the composition(s). The above mentioned third party is referred to as the licensee. Section 2(j), in short, defines the term licence as the right to use benefits of having a copyright of a particular commodity.

These commercial purposes include, but are not restricted to, online usage, radio, films and podcasts. A well-drafted music license agreement is essential in making sure that the producers and creators of the music get their hard earned money from their work. This is ensured through royalties.

Royalty is a payment made to the legal owner for the use of property. The conditions upon which the royalties are awarded depend upon the license agreement between the parties. The royalty rate awarded to the musicians depend upon a variety of practical factors like their popularity, what the licensee deems as the worth of the composition, state of the market, available alternatives and so on.

This basically means that the creator of the music may give permission to a third party for the usage of the benefits of a copyright of a commodity.

Purpose of a Music License Agreement

The main purpose of a music license agreement is to lend the copyrights of the musical composition to a third party, so they can use it for a commercial purpose. Music licenses are probably the only way through which music reaches a large audience transcending political and geographical boundaries in many cases. But is it feasible for every single artist to deal with the legal teams of every company who wants their music? In most cases, No. Hence, they appoint an agent in the form of a “copyright society” to do the same.

How Do Artists Earn Money or Royalties

As mentioned earlier, mostly, it is through granting licences. The entire legal process of granting licenses can be financially expensive and cumbersome for artists to handle individually. So, they register with “copyright societies” which collectively grant licenses to third parties, and pay the artists.

How do artists give their music for usage on websites, apps and softwares like Gaana.com, iTunes, Spotify, YouTube etc? iTunes, Gaana.com and other such companies are the licencees for the music they exhibit on their websites/apps. This is done by signing a music licence agreement with the artists, composers, producers etc. for exclusive rights for their music. This is done through a copyright society.

A copyright society basically acts like a middleman for the transactions with the licensee. They interact with the radio channels, websites etc. on behalf of the producers.

This has been elaborated under Chapter VI of the Indian Copyright Act.

Can Possessors of Unlicensed Music be Held Liable Under Copyright Laws

Listening to music, or more importantly, downloading, from sites which do not have a licence to stream is an offence under Section 58 of the Indian Copyright act, 1957. This law is not easily enforced, as the copyright holder would have to “take proceedings for the recovery of possession thereof”. This is very tough to enforce due to the simple fact that illegal downloads are so widely prevalent.

Section 58 further makes sharing of music an offence, for example, if you legally download a song from a licensee, then you cannot give it to another.  Exceptions to this include purposes of “teaching, scholarship or research”.

The websites or apps where music can be streamed or downloaded legally have signed music licence agreements with the owners of the copyrights. For proper usage of such rights, the portals make the end users agree to an agreement called an End-user Licence Agreement (EULA).

Nine times out of ten, we do not even give the EULA (also called “licence agreement” or “terms and conditions” in common parlance) a cursory glance before pressing the “I agree” button. The thought process is that the agreement cannot be harmful, can it? A layman feels that it is too much legal jargon to read just for a, say, 5-minute song or a 20MB app. But the fact remains that the agreement is legally binding, and it is always advisable to be aware about the contents of any agreement you are a party to.

EULA, as the name suggests, is the agreement between the end-user and the licensee of the music or such digital files that are being referred to. EULAs of renowned apps like iTunes, Safari and Google Chrome have gotten into trouble due to either redundant or misleading clauses in their EUCLAs.

A torrent is something we all have used, but most are clueless about. A torrent involves a file distribution system. Without going into too much technical jargon, a torrent is basically a computer file which contains metadata (in simple terms, information) about digital files, like music, videos etc., which are available for transfer and download by multiple users.

The difference between torrents and normal downloads is that torrents are downloaded from multiple servers, while a regular download uses a single server for download. A torrent finds multiple computers with the file, and “seeds” the content. So, while downloading a torrent, we download from other users who have previously downloaded the same file.

Downloading files through torrents is not illegal, but not all the free content found on the websites is available legally, as mentioned earlier. For example, the latest episode of the world famous show, Sherlock, premiered in India on the 7th of January, but was available on torrent websites from the 1st itself. This was possible through illegal torrents. Section 58 of the Indian Copyright Act would apply here too.

Some artists give certain websites and apps licence to let the users download free music legally. Limited licences are accorded to the website for selective use of the music. An example of such a site is jamendo.com. It has provisions for buying of licences for personal, online or even large scale use. The image illustrates upon the same. 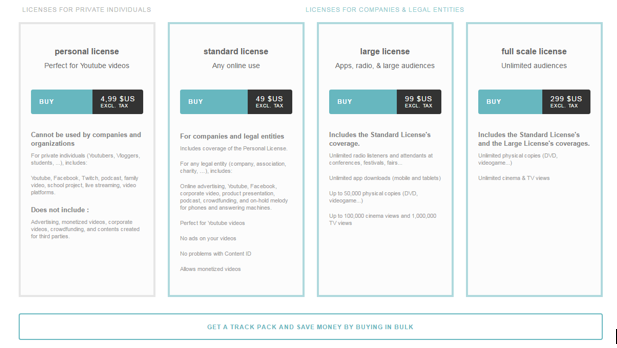 Websites like SoundCloud and Saavn have licences for free streaming of music, and further, some artists give licencing for downloads. They further their revenue by showing advertisements on their websites.

SoundCloud and Apple from an Intellectual Property Laws Perspective

I have chosen SoundCloud because it is an app solely dedicated to audio uploads (unlike YouTube, which is more popular, but is a video uploading site) because it is very easily accessible for independent and upcoming artists too.

Apple’s EULA has been under criticism for being too long and textual, which dissuades even the more determined users from trying to read it. This section provides a breakdown of the same.

Checklist of a Music License Agreement

This section gives a few details about the clauses of a basic music license agreement.

An example of rights granted in a license grant is as follows. This agreement is with respect to the music rights accorded to a particular game.

The above-mentioned text is an example of a part of the license grant in a music license contract. The agreement further goes on to mention the composer’s rights and obligations. A license grant is applicable for a particular “term”. This has been further defined in the next sub-section.

The “term” of the agreement specifies the effective date from which the agreement begins, and also the date of its end. The following is an example of the term and termination part of a music license agreement. This is a part of the agreement whose license grants section was quoted earlier.

An example of a general assignment clause:

This section includes the clauses about the royalty to be paid to the artists at al, the remuneration for the licensee and so on. This clause handles the payments of both the parties, and hence, the commercial importance of the clause cannot be understated.

Music licence agreements affect the daily lives of practically everyone who listens to music, which is basically, everyone. Every time one downloads a song, whether legally or illegally, the intellectual property laws apply. Music license agreements are the bread and butter for most artists who are practicing on a large scale. With the vast popularity of music, and sadly, pirated music, a lot of their work is going un-remunerated.

What needs to be done, is improving the implementation of law enforcement regarding the music industry. Section 58 of the Indian Copyright Act is not enough, the practicality of implementation renders it mostly redundant.

A well-drafted music licence agreement lead to the musicians getting their hard earned money in this cutthroat industry with immense competition and less opportunities to shine. Spreading of awareness might help with the plight.