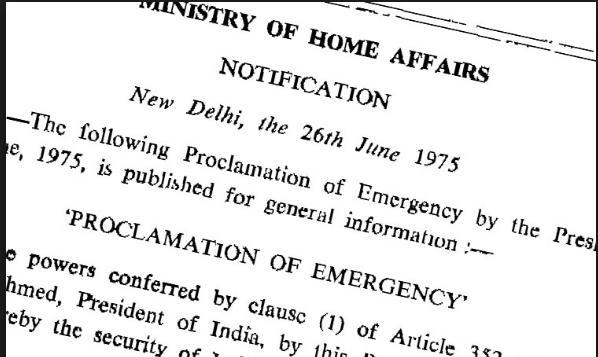 In this blog post, Sreeraj K.V, a student of Government Law College, Ernakulam, Kerala writes about internal emergency and its impact on India. This article covers areas like various types of emergency contained in the Constitution of India, reason for the proclamation of emergency in India as well as its impact on our country.

Emergency in India or at the global scale is not a new concept. In India, the proclamation of emergency during the time of the Indira Gandhi Government was a shock to other countries also. But no one could resist such situations as there are clear provisions regarding implementing an emergency when there arises such a situation in the country.

To protect the nation and its people from any unusual situations which may be likely to take place, Part XVIII of the Indian Constitution provides certain provisions of implementing an emergency which is framed under Article 352 to 360 of the Constitution which are: 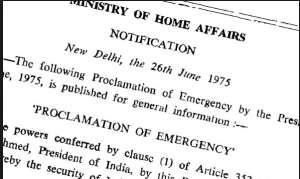 In India, there were certain internal disturbances due to the issues regarding a case filed by    Mr. Raj Narain, who was defeated by Indira Gandhi in the Parliamentary elections claiming that the defendant had done an election fraud and the PM was even cross-examined in the Court and was found guilty of her acts. Indira Gandhi challenged this decision in the Supreme Court, but the Court upheld the decision of High Court and ordered her to stop all her privileges as an MP and also debarred her from voting but conferred the right to continue as the PM. 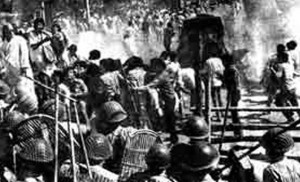 Next day, Jayaprakash Narayan, a popular leader, conducted a rally in Delhi, and it resulted in various signs of inciting rebellion in the country. On the light of certain events, Indira Gandhi, on a complaint to the President, requested to issue a proclamation for state emergency in India. It resulted in the deprivation of all the civil rights of the citizen to bring back national peace and security.

Impact of Emergency in India

Now looking at the matters affecting human rights of the people during the time of emergency, it has to be stated that it was one of the most arbitrary powers exercised by the Constitution as well as by the Government towards its people. Constitution, a most sacred document of fundamental rights subverted into the most ruthless manner possible.[1] Many places in India faced situations where military forces were assembled to stop people from forming groups and talking about matters that were not personal. One of the major functions assigned to the police and the military was to stop people from forming groups as well as arrest persons who looked or behaved suspiciously. No media was allowed to publish the news without censorship. All such instances resulted in the violation of certain fundamental rights as well as a pure case of human rights violation.

Article 352, 356 and 360 deals with provisions regarding the emergency. As mentioned earlier, there are three types of emergency. The effect of proclamation of emergency is clearly stated in Article 353 of the Constitution which reads as: 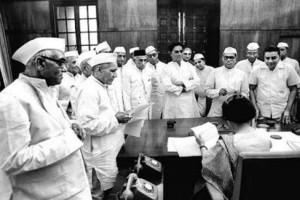 Emergency not only gave immense power to Indira Gandhi but also to her son Sanjay Gandhi. He performed certain atrocities of sterilization covered under a reason of ‘family planning’. It must also be stated that the 38th to 42nd amendments of the Constitution was done during the time of emergency. Provisions under 38th amendment dealt with barring the review of the proclamation of emergency, judicial review of overlapping proclamation or promulgation by the Governors and of laws that contravened the Fundamental Rights. 39th amendment dealt with the protection of Prime Minister from Supreme Court actions resulting from election cases. 41st amendment stated that no actions must be taken against the President, Prime Minister or Governors during their term of office and the 42nd amendment gave unrestrained powers to the Government to make changes in the Constitution as well as to invalidate the Kesavanatha Bharathi judgment by the Supreme Court that Government has no power to change the Constitution.[2] 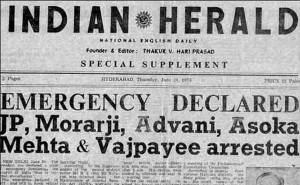 There were a large number of protests and revolts in various parts of the country for winding up the emergency as well as for the formation of a new Government. But it took 21 months from 1975-77 to get a solution to the crises that Indian people faced. K.R.Sundar Rajan, then an assistant editor at the Times of India stated that “Indian democracy lay in serious jeopardy in 1975 when Indira Gandhi’s Emergency destroyed the country’s democratic framework. Fortunately, that long day’s journey into the night ended in March 1977”. Mr. Sundar Rajan was imprisoned during the time of emergency. He also stated that the emergency was reflected as the darkest hour in the fifty years of freedom.[3]

21 months of emergency proved to us that the Government has powers to make certain orders. Emergency affected Indira Gandhi, as well as the Government under her Governance badly but certain political strategies as well as plans and actions, made her the Prime Minister again. The main slogan of the Government was ‘Hatao Garibi’ which means eliminate poverty throughout their period of Governance. Many critics stated that the Iron Lady of India made one of the biggest mistakes in the history of India.