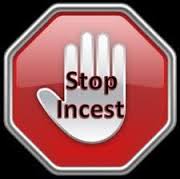 Is incest a crime in India?

No. Incest is nowhere defined in the penal provisions of India. Therefore, if individuals are involved in incest, they cannot be punished for a crime of incest, although, the may be punished for any other legal ground such as adultery or sodomy or rape. Incest is, the crime of sexual relations or marriage taking place between a male and female who are so closely linked by blood or affinity that law prohibits such activity. When anyone enters into an incestuous relationship willingly, it is not an offence, per se the penal provision of India. Thus, there is no offence called incest as per the Indian Penal Code. Provisions of personal laws which condemn incest. 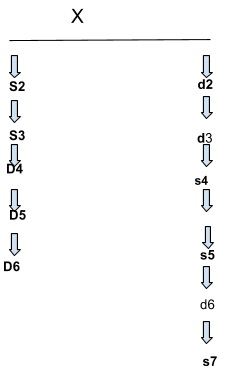 X is the common ancestor and is to be taken as first generation. The right side represents father lineage and left side mothers. S2 and d2 cannot marry each other as they are in the prohibited degree of sapindas. D6 and s7 can marry as they are not within the prohibited degree of sapindas but once they marry the lineage of sapinda again will start from them and continue further in the same manner. Sapinda relationship computes upwards either through the mother or the father or both and the person concerned is always counted as one degree. The provision of Sapinda relationship has a scientific basis too. It is biologically proven that, relationship between sapinda might result in offspring being born as deaf and dumb or physically handicapped.

In Muslims person who comes within blood relationship or relationship considered as prohibited degree are not allowed to marry.

In Muslim law, a son is legitimate only if the offspring is begotten by a man and his wife or a man and his respective slave; any other offspring is known as ‘Zina. First cousin marriage is allowed in Muslims and is not considered as incest in India.

Just as personal laws, close blood relations are within prohibited degree of relationship. Relationships including relationship where people are descended from a common ancestor but by different wives. Or when they are descended from a common ancestress but by different husbands, illegitimate blood relationship (in the present context incest) are within the prohibited degree of relationship. Further, a man cannot marry, mother, daughter, son’s or daughter’s daughter, and all those relations where they are too closely connected with blood as mentioned in schedule 1 part 1. In the same way a woman cannot marry such close blood relation as covered under Schedule 1 part 2 of the Special Marriage Act, 1954.

Cousin marriages in South India. Is it incest? Which law covers this issue?

In southern India, there are communities which practice consanguineous marriages. Marriages never take place between members of the same Gotra. Therefore, a brother cannot marry his own sister but can marry his first cousin. Based on the same principles uncle-niece marriages persists in southern India. A daughter in law refer to her mother in law as Mamiyar (wife of my mother’s brother). Among Telugus, there is a distinction between first cousin marriages. Telugus consider two further bifurcations as parallel cousin and cross cousin and allow marriages of cross-cousin (each of two cousins who are children of a brother and sister) only. Hence, in southern India, few marriages take place out of incest, but it is not illegal as it is their custom.

Inheritance rights of children born out of the incestuous relationship in Hindus.

Inheritance rights of children born out of the incestuous relationship in Muslims.

In Muslim, marriage between first cousin is not considered incest or illegitimate. Keeping this in mind and moving further, what are the rights of inheritance possessed by a child born out of incest? A child born out of incest will be considered as an illegitimate child. Under Muslim personal laws, an illegitimate child has no rights over his father’s property. Under the Hanafi law, the mother and her illegitimate children have mutual rights to inherit property. Child gets inheritance rights not only over mother’s property but also in all the property to which mother is related to.  If an illegitimate person leaves a mother, a daughter, and father, the daughter will get ½ and the mother 1/6th; the remainder would revert to them. The father would be excluded.

The prohibition of incest can be found at the dawn of culture. It is culture itself, said Levi Strauss. Rape and incest are the severest form of barbarity inflicted on women and girls. Hilberman, a psychiatrist, has termed rape as the “ultimate violation of self. The Code of Hammurabi prohibited it in 1750 BC. A shocking fact and stark reality is that the incidents of incest are widely prevalent in society. We usually do not talk about the sexual abuse of children and the incidents ofincest, but it is no secret that they exist in society. RAHI (Recovering and Healing from Incest), a Delhi based organisation, working on the issue of child sexual abuse, where the following findings were reported. 1704 rape cases registered in the capital in the first 10 months of 2014, 215 were cases of incestuous rapes. More disturbingly, in 43 cases it was the father who committed the crime and in 27 cases it was the brother.[1]