Awareness about mediation has always been the key challenge in India. According to a survey conducted by Daksh, more than 54 percent of the people in India are not aware about the existence of mediation We have taken up an initiative to combat this challenge and we need your support for the same.

The first of its kind in India, Indian Mediation Week (http://indianmediationweek.com/) is a pan-India mediation awareness initiative, organized by West Bengal National University of Juridical Sciences (WBNUJS), Kolkata and ODRways with the support of the Ministry of Law and Justice, Government of India, and  Supreme Court Mediation and Conciliation Project Committee (MCPC). The main objective of this initiative is to take the message of mediation to the common man of India.

Mediation drives, seminars, trainings and various other mediation events are being conducted across various cities in India. Mediation ‘Awareness Drives’ is one of the flagship events of IMW. The students of WBNUJS have conducted such drives in 31 areas across Kolkata, directly engaging with more than 4000 people about mediation and receiving around 105 disputes. The other cities that have undertaken mediation awareness drives currently are Delhi, Chandigarh, Gwalior, Jalandhar, Chennai, Bangalore, Dehradun, Guwahati, Jaipur, Gandhinagar and Mumbai. Spreading awareness amongst a different audience, Army Public School in Bangalore has conducted a Conflict Resolution Program for teenagers, Indian Mediation Organization has set up voting clinics for the Global Pound Conference in Chennai and Delhi. Peace and Conflict Resolution Team (PACT) are conducting Mediation bootcamps in Goa and Delhi. Indian National Bar Association has taken up mediation awareness activities both in Pune and Delhi.  Teach for India has extended support for this cause of access to justice in India and will be conducting mediation awareness drives for the parents whose children are associated with their classes. Network for International Law Students (NILS) will also be conducting mediation awareness drives in the National Capital Region. 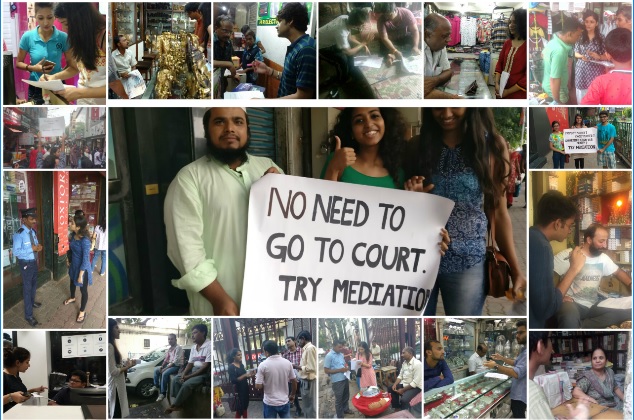 There is a strong social media campaign being run for mediation on the theme of “Suljhao Magar Pyaar Se” which has seen support from the former law minister Mr. Salman Khurshid and the Hon’ble  Justice Madan Lokur. Mediators from all across India are sending videos to show their support for the cause of mediation.

To give a boost to the private mediation culture, ODRways, an online mediation platform recognized by  Ministry of Law and Justice, Government of India is running a “Make mediation accessible” campaign. It’s an online platform which connects people to mediators within 24 hours of filing a dispute. 60 mediators from 20 cities across India have already registered on the platform.  Mediators can register for free on the platform here. https://odrways.com/domain/register.php

Indian Mediation Week aims to organize mediation awareness activities across the year. They have also collaborated with Indian Institute of Corporate Affairs to nominate an independent Jury for recognizing the contributions of top ten individuals in the field of mediation in India. The top ten individuals will be felicitated by NUJS, as part of the Indian Mediation Week project. This ceremony will tentatively be held in January 2017. (http://www.mediationiica.in/)

One of the most heartwarming parts of this student run initiative was the support that we have been receiving not only from India but internationally as well. Young Mediators Initiative of International Mediation Institute has extended their support for IMW. The event has also received international recognition from luminaries including Mr. Daniel Erdmann, Founder, World Mediation Organization, ADR-ODR London to Mediators in South Korea, Australia, USA etc.