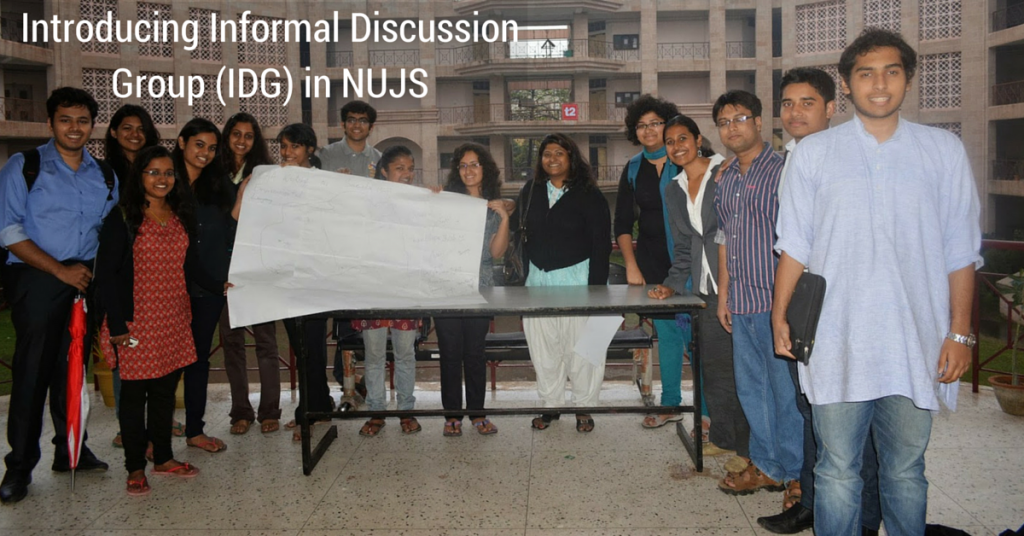 This article was originally published in 2011 in A First Taste of Law, and is now being republished here. I present to you a guest post by  Bedavyasa Mohanty, student of NUJS. In this post, he discusses the concept of Informal Discussion Group (IDG) and how having such a group is necessary for improving the intellect of young citizens, especially law students.

Life in a Law School should ideally be full of discussions, deliberations and debates and that law students and law schools need to engage in issues beyond the four corners of law this group intends to follow a culture of debates and group discussions involving all issues of contemporary relevance. The Society that has been set up along the lines of the Informal Discussion Groups that have been established at St. Stephens(1959) and Nalsar(2004) aims to change preconceived notions and opinions by asking extremely pertinent questions that would not normally be asked in a public forum. The proposed format of most discussions will involve an opening address by the guest speaker on a subject from his area of expertise and then an open house discussion involving, but not limited to the speakers address. The IDG has invited His Excellency, The Governor of West Bengal, Shri M.K. Narayanan in his capacity of Ex- Director of the I

Intelligence Bureau under five Prime Ministers, Ex- Special Advisor (Internal Security) and as the Ex- National Security Advisor to lead the discussion on the topic of ‘India’s growing security concerns’ in its introductory session on 1st March.

The extremely busy schedule of His Excellency only allows for a discussion lasting an hour and a half; so in order to keep questions short and precise the IDG conducted a mock group discussion which acted as a screening test as well as a simulation for the actual discussion. The format of the mock discussion was similar to actual IDG programmes, where a student volunteer pretended to be a notable guest speaker taking a radical stand, and participants argued and debated with that person. Participants, faculty members and all others associated with IDG were really pleased with the outcome of these results. Many students who generally refrain from discussing contemporary issues, raised really interesting issues in the discussion.

In the future, the IDG plans on inviting guest speakers and experts from all walks of life including politics, sports, art, business and theology. The IDG believes that these discussions apart from helping the students to get to know about current happenings in greater detail, will also help develop their skills of interacting and asking pointed questions. It will give them a platform to voice their opinions, learn from their colleagues through constructive dialogue, and lastly but not insignificantly, have an informal interaction with eminent personalities.

The discussions will ensue in a relaxed and informal manner and will be strictly closed to media presence. This will ensure that the kind of questions that are asked and the kind of answers that they will provoke will be very different from the usual circumnavigation that people in high places generally tend to do. The encouragement and support that IDG as the newest society has received in its very nascent stage from the students and faculty of NUJS is praiseworthy and only goes on to vindicate the point that India’s leading law school is indeed the perfect place for such a forum to thrive.