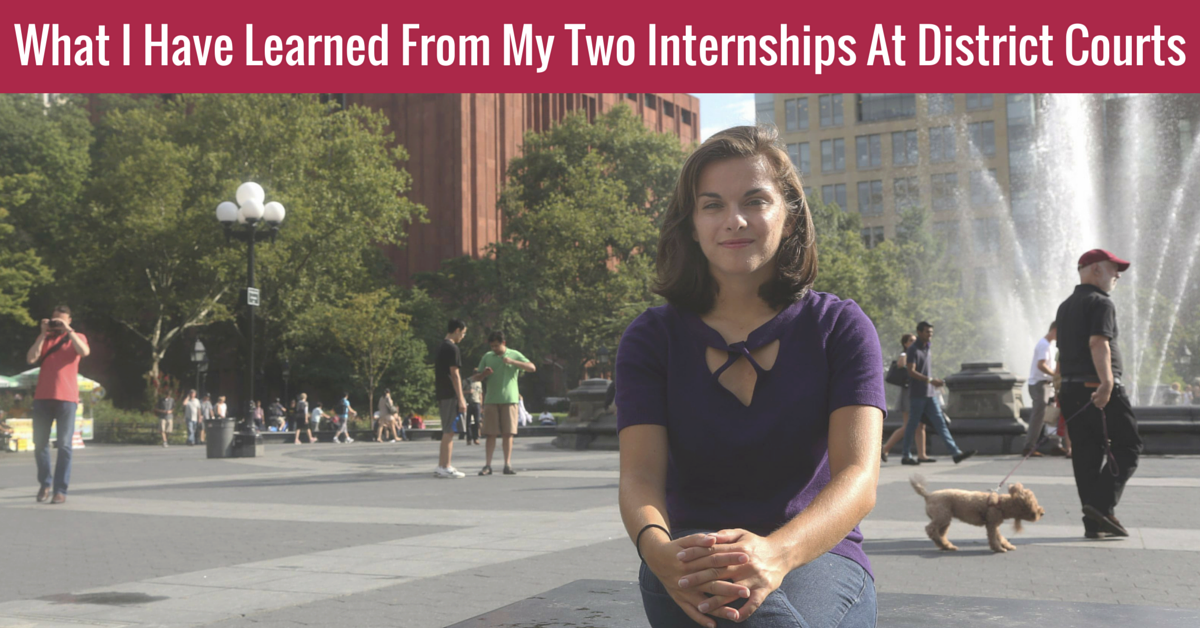 Republished from A First Taste of Law archives. What should you expect at a district court internship?

I, just like any other law student who have just completed his/her 1st semester, was nervous cum excited to start with my first of my internships, in the district court. It was a first step in my career. “District Court”…… this word often portrays the same picture of the Court that we watch in the Bollywood movies. I still remember the day when I started my first internship in the District Court. The black coat gave me a feeling of an advocate who is just ready to march into the Courtroom to solve the case. As I entered the premises, the actual district court was totally different from what I used to watch the movies. The picture that flashed in my mind was of much disciplined, neat and tidy district court. But it was quite opposite. There was a huge rush of people with the lawyers discussing their cases. Some were sipping tea in the tea stall whereas some were rushing to the Courtroom and some were sitting in the bar council lawn and discussing some stuff. The advocates were pre-occupied with their cases and had no time to spare. Since there were elections going on, so it was another topic of discussion among the advocates. So as I walked down the stairs, I entered into the chamber of my advocate. As it was an advocate’s chamber, it contained too many books or rather BARE-ACTS ranging from CPC to Constitutional Law to Indian Contract Act. Apart from this, it had bundles of files which contained the cases of the clients. I introduced myself and my advocate or better to address her as my ma’am as I did, asked me some general questions and from then onwards my internship actually begun.

She told me that that the first step involved before pleading is, drafting of a plaint. At that time the situation of a budding lawyer could be compared to that of a student who is in first standard and has just started learning addition, subtraction, division and multiplication and it is totally new for him. So it all depends upon the teacher as to how she tackles with the student. The same was the case with me. The words like plaint, written statement, rebuttals although sound interesting but it was totally new to me and when you read these words in Hindi is all the more very difficult. My ma’am told me how to draft a plaint and she, in fact, asked me to read various cases so that it would be easier for me to interpret various words more easily and in this way I would also learn to draft a better plaint. She also very beautifully explained the entire format of the proceedings i.e. written statement follows plaint, which is followed by replication, then additional pleas, final hearing which involves evidence of both the parties, date of argument, judgment and finally execution.

She often enquired from her clients as what is the date that has been fixed by the judge. In this way, it reminded me of a very famous Hindi dialog “tareek pe tareek, tareek pe tareek……” She asked me to move along with her in the district court and thereby to understand the proceedings that took place. There were different Courtrooms and judges ranging from District judge to the additional district judge to civil judge(senior division) to civil judge(junior division) and so on. The cases are dealt according to their pecuniary jurisdiction. Section 9 of the CPC clearly mentions about the competency of the Court. It explains what all cases could be dealt by the Court and what they are expressly or impliedly barred from dealing with.

As I entered the Courtroom, it was totally different from what I used to think. There was a judge sitting in the Courtroom and different advocates were pleading before the Hon’ble judge in the mother tongue that is “Hindi”. The judge asked some of the questions and the legal terminology used by the advocates was although easy to comprehend but difficult to understand for common people. My advocate used to deal in civil matters basically conflicts related to property rights and execution of wills and gift deeds as like. So the cases that I actually came through were mostly civil in nature. For instance, there was a case that was related to the partition of the property. For a student of the first semester what is necessary while watching the proceedings is to understand as far as possible each and every word that is pronounced while an advocate is pleading before the Judge. Although it is difficult to easily understand each and every line, yet it is necessary to jot down each and every point that he come through the proceedings. The way an advocate pleads before the judge and prays before him to grant the partition and exclusive possession by meters and bounds are really worth noting. Apart from this, another thing that has to be kept in mind is the different terminologies that are used like an injunction, jurisdiction, stay order, judgment, decree, misjoinder, and nonjoinder so on. These words are sacrosanct for an advocate. It is used in day to day proceedings in the Court. One has to be thorough with the drafting of a plaint, deeds and the format in which the proceedings take place as it forms the core of the internship.

Moving a step ahead, another basic element of the proceedings is Civil Procedure Code which I learned in my summer internship done in the district Court. CPC is the most important element while any proceedings are being carried on. CPC is divided into orders and rules. For instance, order 1 mention about the parties in the suit. Order 3 explains the power of attorney and appointment of the pleader. Similarly, order7 explains about the plaint, order 8 about written statement, order 14 about how the issues are framed and as like. One has to mention the order of the CPC while drafting a plaint. Apart from this, I also saw the proceedings on order 22 Rule 3. It explained that if any suit has been filed at the time when the person was alive, but the person died after filing of the suit; so it will not bar the rights of his legal heir to sue or be sued. But if a person is already dead and then a suit has been filed in the name of the dead person, then it is legally not valid. This is because of the reason that how can a suit be filed against a person who is not alive. In case there is no legal representative, then a Court officer shall be appointed for the same. Similarly, one has to be through with the basic rules like Rule 1 of CPC that is an appearance of both the parties on the day fixed by the Court. Rule 2 explains about the dismissal of the suit in case of non-appearance of the parties and as like. When the proceedings are taking place, then there might be a situation that a law student who has just completed his/her first year might not be able to grasp each and every order of the CPC. But it is the duty of every student to be curious and enquire about each and every section and orders that have been mentioned. Thus, it could be said that the entire proceedings in the district Court revolves around CPC. It forms the core of all the activities and all the plaints actually start with an order.

Apart from the proceedings, every Court contains a library. One should definitely visit the library in the Court. The library contained books, journals, and cases which are now taken as precedents. Apart from SCC (Supreme Court Cases) there are other journals as well like ALR known as Allahabad Law Reports, ACC (Allahabad Criminal Cases), BJ (Bankers Journal), CRC (Civil and Revenue Cases) that we could come across in the library. Law is a vast ocean. The more you go into the depth, the more you acquire knowledge and this is what I exactly felt when I was going through various journals in the library.

Millions of people come into the Court and hires an advocate with the expectation that they would win the case and justice would be rendered upon. But the question arises that “has the justice been conferred upon each and every person?” The answer may be quite difficult. Various appeals are dismissed and many cases keep on piling. Suits filed by a father keep on going and even his grandson becomes a party to it. Interning in a district Court offers a vast experience to a law student. It not only provides a practical knowledge about the various acts like Indian Contract Act, CPC, but also provides you an insight as to what the Indian Judiciary is all about. It provides you with the knowledge that how the cases should be pleaded before the Hon’ble Judge. It enhances your knowledge and widens the horizon especially for those who want to go in for litigation after the completion of their course. It is the duty of every advocate to render his best and true efforts while solving any case because it is meant for the benefit of the common man. Law does not mean simply to solve the case for monetary value but also moral values should be kept in mind to great extent. Through the internship in the district Court and by watching the proceedings, one could easily learn about these prospects.