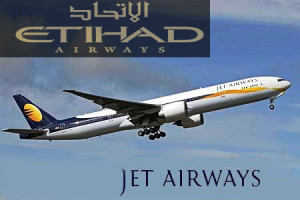 The article is written by Akansha Mehta.

There remains many more hindrance in the way of the Rs 2,060 crore Jet-Etihad Deal as despite getting a clearance from the Competition Commission of India (CCI) vide order dated 12/11/2013, three weeks later an appeal has been filed in the Competition Appellate Tribunal (COMPAT) against the CCI’s decision. This post focuses on the composition of the deal and the reasoning given by the CCI while approving it.

According to the Government notification (S.O. 480E dated 04.03.2011) in case of an acquisition where one enterprise acquires the shares, voting rights or assets of another enterprise have either, in India, the assets of the value of more than INR 15 billion or turnover more than rupees 45 billion, or, in India or outside India, in aggregate, the assets of the value of more than USD 750 million, including at least INR 7.5 billion in India or worldwide turnover of more than USD 2.25 billion, including turnover of at least INR 22.5 billion (approx. USD 500 million) in India, such an acquisition shall be deemed to be a combination whose regulation shall be according to the Act.

The proposed combination in the case of Jet-Etihad relates to acquisition of 24% equity stake and certain other rights in Jet by Etihad. Etihad is a company incorporated in the United Arab Emirates (UAE) which is the national airline of UAE. It is wholly-owned by the Government of Abu Dhabi and is primarily engaged in the business of international air passenger transportation services. While Jet is a listed company incorporated in 1992 under the provisions of the Companies Act, 1956 and is primarily engaged in the business of providing low cost and full service scheduled air passenger transport services to/from India. The combined value of assets and turnover of the parties met the threshold requirements for the purpose of Section 5 of the Act and therefore their regulation were to be done according to the Competition Act, 2002.

The consequence of acquisition of 24% equity stake by Etihad shall be that it will have the power to nominate two out of six shareholder directors, including the Vice Chairman, in the Board of Directors of Jet which shall amount to be a significant participation in the managerial affairs of Jet. With a view to achieve the purported objective of enhancing their airline business through joint initiatives, the parties also entered into a Commercial Co-operation Agreement (CCA). Under the CCA, the parties agreed that- they would frame co-operative procedure in relation to (i) joint route and schedule coordination; (ii) joint pricing; (iii) joint marketing, distribution, sales representation and cooperation, Etihad would recommend candidates for the senior management of Jet.

It was observed by the CCI that the effect of these agreements including the governance structure envisaged in the CCA establishes Etihad’s joint control over Jet, more particularly over the assets and operations of Jet. In order to assess the effect of this control, the CCI primarily analysed the effect of the proposed combination on those services that were offered by both the parties.

The Acquirer (i.e. Etihad) is the national airline of Abu Dhabi, primarily offering international airline services to and from Abu Dhabi, and between other international destinations using Abu Dhabi airport as the transit hub. Whereas, Jet is a listed Indian company offering both domestic and international air transportation services. Jet is stated to offer services between different call points in India to 20 destinations abroad.  It was observed that Etihad will not be operating in Indian domestic air transportation services i.e. air transportation between two airports located within India. Therefore, the proposed combination is not likely to raise any competition concern in the said sector. In this context the Commission observed that the relevant market to assess the effect of the proposed combination is the market for international air passengers.

While assessing the impact of the proposed combination on the international air passengers CCI observed that India-UAE passenger traffic consists of approximately 3.5 million origin and destination passengers per year. Out of this, Jet has only 20 percent share and Etihad carries only 5 percent of the market. Jet and Etihad provide overlapping services in 9 nonstop markets between India and UAE. The market share of Jet and Etihad combined in all these nine nonstop markets is below 36% andthey face intense competition from other airlines serving the same routes. The Commission observed that Indian passengers flying to these destinations are fare sensitive therefore any tendency to raise fares by them on such routes will not be profitable for the airlines.

Considering these facts and the assessing the other relevant factors as mentioned in Section 20(4) of the Act, the CCI stated that the proposed combination is not likely to have appreciable adverse effect on competition in India. An appeal has been filed in the COMPAT against this order of the CCI on the ground that the CCI failed to carry out an assessment of the appreciable adverse effect on competition and placed all passengers and indeed the entire airline industry into a grave risk of suffering irreparable damage and permanently eliminating competition. This appeal might have some standing as   through his minority order Member Anurag Goel also stated that the proposed combination is likely to cause an appreciable adverse effect on competition within the market of international air passenger transportation from and to India.