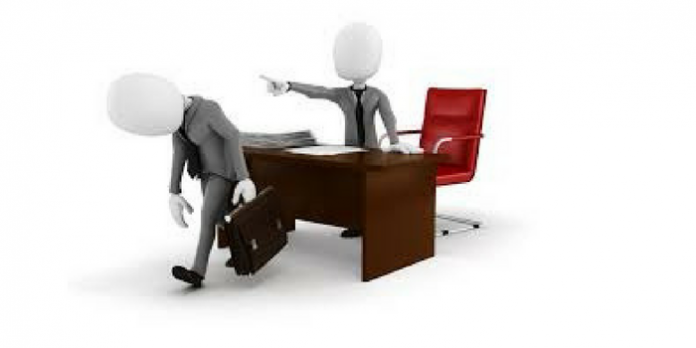 Recently a friend called me at 1 am after his night shift ended. Half asleep, I asked him what’s wrong. It turns out he had a work-related dilemma. Minutes ago he was asked to dismiss someone from his team as the client had escalated a complaint against him. Now this is an IT Company, so there are no unions to bargain or fight for the guy.

My friend was feeling bad as the person in question has had a spotless record and just erred once. The problem unfortunately was that his one mistake cost a lot of money to the client. So there was no scope of second chances or a do-over.

This guy had a family and was seeking mercy from whoever could offer. That is why my friend was in a dilemma; whether to help the employee or listen to his boss? The HR and the boss were pushing for dismissal from the project and the company. But the problem is, did they have sufficient cause of action for termination of services? They wanted to cite non-performance as the reason for his dismissal.

Come to think about it, is one mistake big enough to be considered non-performance? Or should a series of such incidents be considered so? Who decides whether to take one episode or multiple into account? How can one party have such unbridled power? Is there no relief for the employee? Is this the modern version of slavery?

All the employed people in their cushioned jobs have only the law to protect their rights. The employment agreement more often than not favours the company, and the individual employee has little to no bargaining power!

This led me to think about my past and present employment agreements. How much bargaining power did I have while accepting them? Sure, they were mostly standard. But did I know enough before signing the document? Did I waive off my statutory rights as well? Was the agreement enforceable? What would amount to non-performance of duties or misconduct on my part?

These questions made me regret the fact that I had very little knowledge of these laws, in spite of being a lawyer. So what do you do when you are out of law school and need to not only be updated about the law, but also understand it from scratch? Read bare acts online, google for comprehensive articles like this one on 13 Laws Every HR Must Know and 8 Important Rights of Private Employees, do online courses on labour and employment law and know more about the rights and duties as an employee.

Here are the answers to some of my aforementioned queries:

Can an employee waive his statutory rights through his employment agreement?

Sometimes employers draw agreements where employees have to waive off their statutory rights as well. But thankfully the law protects against such atrocities. The labour laws have provisions to safeguard against such waivers.

Any agreement would be void according to the Indian courts, if there is a waiver or relinquishment of statutory rights of an employee, including the gratuity, statutory bonus, maternity benefit, overtime, etc.  Although owing to an imbalance in bargaining capacity between an employer and an employee, a waiver of statutory right might be void. But a general waiver of contractual rights may be enforceable, based on the facts of the case.

Private sector employees can be management staff or workmen. The term ‘workman’ has been defined under the Industrial Disputes Act, and would mean all persons employed in any industry but does not include an employee who is in a managerial, administrative or supervisory role. The workmen are governed by labour laws like the Factories Act, the Payment of Wages Act, etc. The non- workmen are governed mostly by their employment contract and the Shops and Establishment Act of the state in which they work.

The employment agreement lays down the conditions for dismissal of an employee from the services. Usually, termination takes place as misconduct, discharge or retrenchment.

They are related to misconduct, non-performance, lying about qualifications or experience, statutory restrictions, undisclosed information, information theft, willful insubordination or disobedience, fraud or dishonesty, willful damage or loss of employer’s property, bribery, habitual lateness or absence, striking unlawfully and sexual harassment, etc. But these are the fair reasons for the dismissal of an employee.

Unfair dismissal of an employee

There are situations where the grounds for termination is arbitrary or unclear. It sometimes seems that these grounds were almost dragged to bring them under the purview of the employment agreement, under the broad heads like non-performance or misconduct on the part of the employee.

Basically, an employer has to prove the grounds of termination or dismissal before a disciplinary committee or the court. If he fails to do so, then he has to adequately compensate the employee for the wages of the said period.

Pregnant female employees cannot be discharged or dismissed on account of the absence of their pregnancy. Such employees are not to be employed by the employer within six weeks of delivery or miscarriage. If dismissed, they can still claim maternity benefits.

If the employer does not follow the due procedure of dismissal like provide notice or give a chance for the employee to be heard, then it amounts to unfair dismissal. If the contract’s conditions are violated by the employer, like non-payment of salary, long working time, irregular contribution towards PF, gratuity, bonus, etc. and refusal leads to dismissal, then it is an unfair dismissal. The entitlements of an employee are not waived off in case of termination.

If there is discrimination based on gender, race, religion, caste, etc. at work which leads to the termination of an employee, then that would amount to unfair dismissal. For instance, if the employee gets the boot because of displaying his religious beliefs in his appearance, the employer cannot terminate citing the code of conduct.

Maybe your boss has a grudge against you, or he gives an illegal instruction which you refused to comply with, or he has an ongoing dispute with you. But an employee cannot be terminated from services based on such reasons.

One of my bosses did not appreciate my questions when he asked me to deviate from the company’s policies. I tried following the policies, and he held a grudge against me which came out during my performance evaluation. I was not terminated, but there was no way to prove his personal bias in such a situation. I eventually quit the job for various other reasons, but this episode stayed with me.

Usually, the termination of an employee is a tedious process, and an employee can be terminated by giving due cause and notice or by non-renewal of annual contract, etc.

But there are cases like the IT employee who made one colossal mistake. The company removed him from the project and put him on probation. His record had been spotless, so there was not much for them to do there.

The problem with proving unfair dismissal is that the employers usually find a way to dismiss an employee under the garb of fair dismissal. They may allot more work and then cite non-performance or missing deadlines, etc. Or they may cite coming late to work as not complying with the company’s policies. The point is any small or big unrelated issue could be cited as a reason for termination. This becomes difficult for an employee to prove as all such records are the company’s property.

Therefore it is imperative for everyone to know their way around labour laws. You don’t need to cram the provisions in your head. But you should gain a practical working knowledge of the same through labour law courses or webcasts or workshops.

So learn your way around the system in time. Don’t let a one-sided system take away your rights. You have the right to fight unfair dismissal.