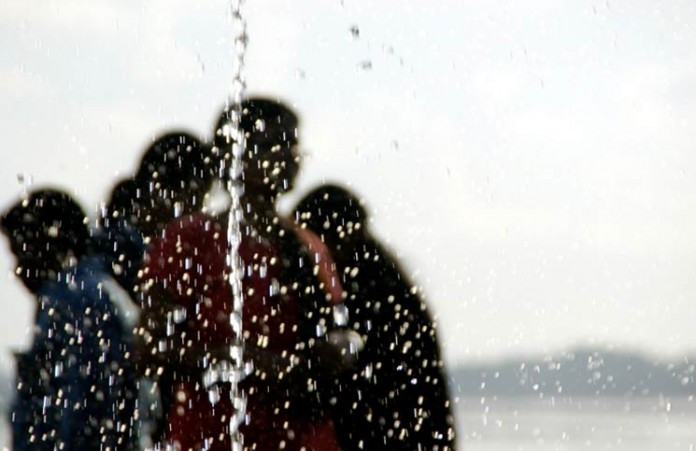 In this blog post, Sucharita Ghosh,a student pursuing the Diploma in Entrepreneurship Administration and Business Laws by NUJS, discusses the legal and illegal use of pellet guns in India and specifically in Kashmir.

The recent violence in Jammu and Kashmir has brought the use of pellet guns in focus. Many people are suffering from severe injuries, after security forces fired pellet guns to control the violence triggered due to the death of Burhan Wani. Though a pellet gun is treated as a “non-lethal weapon”, however, it’s use by untrained personnel makes it a lethal weapon.

In this article, we are going to discuss the legal and illegal use of pellet guns in India and Kashmir.

What is a Pellet Gun?

Pellet gun, a special form of an air gun, is a type of non-lethal weapon, used as a means of crowd control by the police and military worldwide. 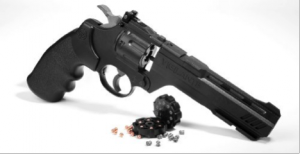 The pellets penetrate the soft tissues of the skin and results in severely damaging individuals and causing pain. The pellet sometimes strikes the eye. An eye being the delicate structure is the most vulnerable to damage. Once a pellet goes inside an eye, it shatters tissues and causes multiple damages to the different parts of an eye.

The pellet guns were introduced by the state police in August 2010 when more than 100 people were killed during the stone-pelting protests in Jammu and Kashmir.

In every country, there are different kinds of regulations regarding the use of guns. While in some countries air guns are not subject to any specific regulations, in most jurisdictions there are Arm Control Laws for different weapons of different bore, muzzle, energy, velocity, etc.

Law Relating Use of Airguns in India

In India, the use of an air gun is not totally illegal. It can also be used legally, but only after a license is produced. In some specific cases or in the case of less powerful weapons, one does not need a license to use it.

Airguns are used for hunting, pest control, recreational shooting and competitive sports. But pellet guns are specially used for crowd control by the army and police officers. 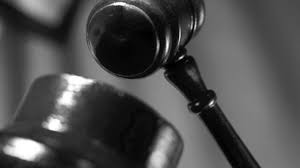 In India the use of guns are regulated by the Indian Arm Act, 1959 which proposed to amend and according to the proposal a new draft has been made on 2015. As per the new Arm Regulation Draft, 2015, acquisition of airguns with muzzle energy under 20 Jules/15 feet or 0.177 mm will not require an arm license. But any air gun having muzzle energy in excess of 20jules would be treated like fire arms. To use an Airgun without a license, it must pass the “deal wood test”.

If any person possessing any such air gun without an arms license, it will be treated as illegal and he will get penalty along with punishment.

Use of Pellet Guns in Kashmir

Pellet guns are used as means of crowd control by security and police personnel. It caused serious injuries and severe harm to thousands of Kashmiri people. The use of pellet guns in Kashmir by the police force in reaction to the current protests is a clear violation of human rights and humanitarian law.

After the death of Mujahideen leader Burhan Wani, large-scale protest and funeral gathering have been taking place in Kashmir valley. To control the crowd who are protesting by throwing stones at the police and military officers violently, the police and security force used firearms and pellet guns.

This is not the first time, the state force of Kashmir has previously used firearms and pellet guns by treating these weapons as non-lethal weapons. However, many people have lost their life and eyesight and injured permanently.

Use Of Pellet Guns: A Violation Of International Standards

By using pellet guns, the Indian Government is violating international standards with its current response to protests in Kashmir. The Government is violating the UN Basic Principles on the Use of Force and Firearms by Law Enforcement Officials. The basic principles state that Law enforcement officials must apply non-violent means before resorting to the use of force. Whenever the lawful use of force and firearms is unavoidable, law enforcement officials shall exercise restraint in such use and act in proportion to the seriousness of the offense. They should focus on minimizing the damage and injury and ensure that assistance and medical aid are rendered to any injured or affected person. 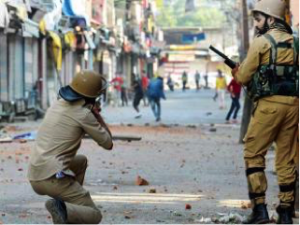 But in Kashmir, restraint is not being exercised; the injury is not being minimized, and medical assistance is not ensured. Pellet guns are a violation of morality, and it is not a proportional response to the people who are violating peace and security. Serious harm is being inflicted, particularly involving people’s eyesight, far too many bystanders, including children, have been injured, and medical assistance comes only at the risk of being arrested and prosecuted.

It is true that sometimes it is required to use firearms to bring peace and control in the state. The police have a duty to protect lives, safety and prevent crime, but in carrying this duty they must use non-violent means as much as possible. When the use of force is unavoidable because of compelling reasons, the police should focus on using force to those who are involved in the violent act. The police should ensure that uninvolved persons are protected from injury.

The domestic procedures on crowd control should reflect international expectations of proportionality and necessity. These procedures should protect the Kashmiri’s, but in reality, they are not followed. It is causing severe damages to the citizens. During a crowd control operation, only two to five officers should have non-lethal weapons and banners should be used to warn the unlawful assembly prior to the deployment of any force. Not only that, when firing becomes necessary, which is only after efforts are made to disperse a crowd without force; every attempt should be made to fire below the waist. With the number of eye injuries, Kashmiri citizens are facing, it is hard to believe that any attempt was made to fire below the waist. 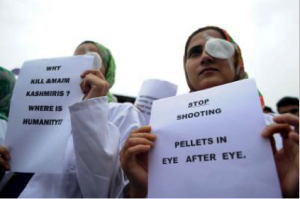 Moreover, if shooting becomes necessary, firing must be in a single shot mode. Yet, pellet guns fire hundreds of tiny shots with each cartridge. This goes hand in hand with the requirement that fire only be directed towards the most violent sections of a stone-pelting mob, not the mob in its entirety. Pellet guns do not offer effective aim to target the crowd accordingly, and many peaceful protestors and bystanders have been injured during their use. Another thing is that, the women and children demonstrators should only be dealt with by female officers and that water cannons, tear gas smoke, and if necessary stun grenades be used to disperse these demonstrators, but many woman and children are also victimized by pellet guns as it cannot ensure well-targeted shots.

Regrettably, the current state of law in India grants government officers impunity for even the most gross violations of human rights, including the current pellet attacks and breakdowns in crowd control procedure. The Indian Criminal Procedure Code (CrPC) produces de facto immunity for police officers, members of the armed forces and other government officials. Section 197 of the CrPC says that no court has jurisdiction over an alleged criminal offense committed by a government official “while acting or purporting to act within the discharge of his official duty,” without first obtaining authorization from the requisite Central or State Government.

Because of the above stated reasons, after observing the serve injury faced by the civilians due to untrained security personnel being allowed to use pellet guns, the Jammu and Kashmir High Court ordered a report from the centre on handling of the lethal weapons by untrained personnel indicating its disapproval of use of pellet guns by security personnel. 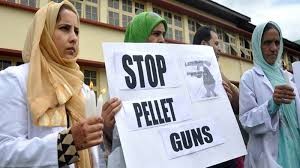 The court also asked the Government to consider other means of crowd control that do not involve pellet guns.

On the basis of those reports, India plans to reconsider the use of pellet guns by security forces when controlling crowds. Recently home minister Rajnath Singh decided to take steps to stop the use of this dangerous weapon.

On July 26, a seven-member committee headed by T.V.S.N Prasad, Joint Secretary of Ministry of Home Affairs constituted in the Lok Sabha to look at non-lethal alternatives to the use of pallet guns in Kashmir. The committee is exploring various options for enhancing the intensity of tear gas shells, using chili powder and rubber bullets in place of pellet guns. The committee suggested that there will be no blanket ban on the use of pellet guns. At the most, it will be used in rarest of rare cases; and the pellets will not be of metal but of soft material like polymer, soft plastic, rubber and even paper.

The Government is facing severe criticism for using the pellet guns, and many of the political parties have asked for its complete withdrawal. The Government of India and the State Government of Kashmir must order the police force to stop using pellet guns as soon as possible. This kind of “lethal” use of “non-lethal” weapons would not be just harmful to the citizen, but a criminal act. The pellet gun should not be used as it is totally against humanity and morality. 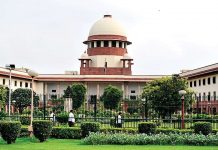