This post has been sent to us by a student of MATS Law School, who has requested us to keep the identity of the writer anonymous. 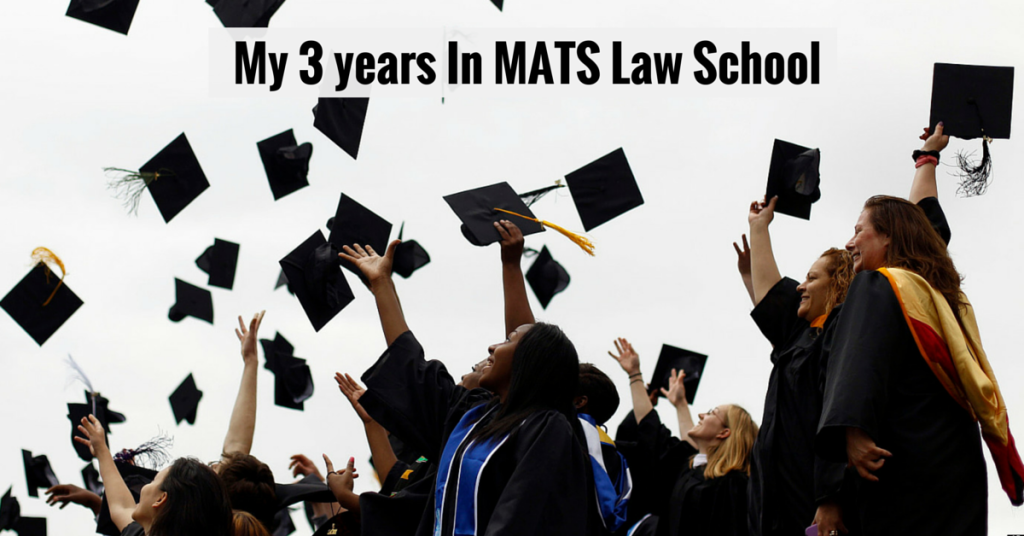 I being a member of the business class family, has always seen my siblings doing either their own business or joining the family business. But I had always dreamt of doing something different and challenging in my life. With the beginning of the session of 11 Class, we had a career counselling in which we had been informed about the various courses which we can do after our school life, and so that’s when I came to know about ‘LAW’. This was the word that has driven me to take this course, to know the meaning of this word.

I took the CLAT examination but didn’t get through it.

I came to know about MATS Law School through my cousin’s friend, who is my senior here.

So I applied here and got my name registered for the B.B.A.LL.B (Hons.) course. Initially, the days were tough as it was my first experience when I was away from my family. With the beginning of the session I was really worried and nervous but after few days we had an interaction with our seniors &amp; faculty and then they made the environment quite comfortable for me &amp; my batch mates. Soon I had an interaction with three of my faculties, who played a very important role in shaping my career. From every three of them, I learnt so many aspects of life and more importantly of the meaning of the law.

When it was sensed by the faculty that I am having some trouble with regard to my studies I was called by Miss. S &amp; Miss K in their cabin to have a word with the same. Few of my seniors were already there as they were discussing the various events that were to be conducted in the upcoming semester. I was introduced to various seniors of various batches all of them seemed to by studious and serious. As I was leaving the cabin as I Miss S &amp; Miss K were pre occupied by the work I was offered to join the discussion, I was not able to say No and I eventually join the discussion and eventually I realised that my seniors were not the one who were having some other background they were the one who were same as me they were fun loving easy to communicate and with a good sense of humour and I dint realised when 2 hours passed. I was happy that my queries were answered in a positive way. In those two hours I became aware of various events which are there for the law students like moot court competition, Model United nation, Conference &amp; Seminars.

At the end of the meeting I had a conversation with Miss K & Miss S who helped me and guided me to overcome the internal matters and asked me to focus on activities by which I can actually build up my Curriculum Vitae. I was introduced to various seniors who were easy to approach in case I had any query regarding anything in law school the seniors were from various year LLM students.

As the days passed by I started spending my free time in Library, I was not the one so studies type but I use to go to library and observe my senior and I try to give efforts as to understand how they spend their time in library how they write their articles and off course the boys but eventually all my desires shattered like a glass.

I participated in the Intra moot court competition which was organized to make us aware about the moot court, we were provided with the mentors for the same each team was provided with one mentor, initially it was hard to work as per expectation of my mentor buy eventually I adopted myself and as I was participating as a researcher I was asked to read out various case laws statutes ordinances. As every coin has two side there were few seniors who tried to deceive us from our research so that they can qualify for the next level but few of the moot court committee members asked us to focus on our research work and try to present with full confidence the result of which was that I was awarded the best researcher, I didn’t realised that I shall be happy or sad because I was asked to treat the mentor and few of the Committee members as they motivated and guided me, with the ending of 3 days long moot court session I build up a healthy friendship with various seniors now I use to enjoy their company while having lunch and dinner.

Every now and then we use to prepare something or the other in our rooms illegally as we were not allowed to cook after 10. Soon I realised that my taste buds are going to taste various dishes they are been prepared in various parts of my nation like bortenga, khorisa, potol posto, dhoka etc.

With the passage of time I was terrified by Miss S, Miss K and Miss D because if I lose my concentration in class I was summoned to meet them in their cabin and I was asked the reason for the same. I had my first semester exams I cleared it with flying colours.

As I returned back from my internship and I realised that someone has rightly said the whole struggle & suffering is for the stomach.

All the seniors whom I use to consider the most silent one and were studious one were fighting shouting for the good quality of the food they eventually started moving out the utensil and various other accessories of mess worker out of the campus and I realised the world is stage and every is playing different role at different moments of their life but yes it was fun.

On the very first day of the college, we were informed by the editorial committee about the national seminar. I wrote an abstract which eventually get selected. I thought selection of abstract was the toughest part but then I realised there are many road blocks for the same and good research was the major one somehow I was able to complete the same. On the day of the seminar I was confident enough but things didn’t turned out the way as I my name was to be announce I felt as if butterflies are flying in my stomach I was more nervous as I was about to present it alone it was making me more nervous but my Co-author understood from my face that I am scared enough and when my name was announced he got up and took the mike along with me and somehow we manage to justify our paper as for both of us it was our first experience.

Third Semester has played a very vital role in terms of my CV I was going on a national moot with my seniors as we were having a policy in out college that one junior and 2 senior will be participating in the moot court competition. We did really well but we didn’t qualify for the quarter-finals it was a wonder full experience I learned a lot after all winning and losing does not matter what matters is how much you have learned. As we were under pressure from past 30 days we chose to wander whole night at the streets of Nagpur.

I did my internship at Mehadia Associate at Nagpur, I used to refer the matters of western coal fields Ltd. and various other matters relating to labour laws, I use to prepare various case note drafting and research work for various cases. I understood the procedure of courts.

As I came back after internship and as the time passed the true face of people started coming forward and I was experiencing politics which eventually started and I was among the one who were worst affected, due to which there was decline in my marks, which was realised by the faculty. This was the semester that made me realised the bitter truth of life that as one moves forward towards the door of achievement the fewer people are their who actually wishes good for you in life.

This was the semester that I got the chance to attend the lectures of Mr S. He used to apply the method of negative motivation to me in order to get success in my life. This negative motivation has helped me to understand the jurisprudential aspects and apply it in real life. With this, I wrote a paper which when I even read it now, makes me feel proud of myself. Then I began writing papers for conferences and journals with Mr S and he became ‘MY GURU’. Whenever I was in need of motivation I talked to him. By the end of the semester, I came to know that he is going to join some other college. I was happy for him but at the same time sad about his leave.

Then the next semester came, at the beginning of the session we had our challengers round for the CSD National Moot Court Competition. One month went by in the preparation for the moot. This was my first time to be speaker in the moot, so in my leisure the time I used to practice in front of mirror with my arguments. Then the dates for the moot curt competition came, we travelled to Hyderabad. This was my first time to visit South India. I must say it was a beautiful city. We went to Quarter-Finals but can’t go further and the marks difference was very close. As I have already mentioned that winning and losing is a part of life, so I wasn’t much bothered by it and the next day, we roamed around the city.

When I came back from the moot, everyone was asking about my experience but my batch mates took me into more politics but this time I didn’t let any of it affect me. Then after some days, my juniors came to me and asked about the HNLU moot court competition. After thinking about it for a day, I said yes. But this time I wanted to become a researcher because I realised I enjoy the best till the time I was doing the research work. When the semester went by, I didn’t even realise. This was the first time I didn’t go on an internship, instead I spent my entire internship break at home because of my family problems. When I came back, everything changed. I found that my so-called friends are the ones who are making me involve in the politics. 10-semester seniors are my only friends left here. I was really depressed whenever I started thinking about my family problems as well as thinking that my friends have their last semester and going to leave the campus soon. I started spending as much as time I can. But at the same time I started writing papers and articles for the seminars and conferences. I did this so as to distract myself from thinking too much.