Meaning of NCLT and NCLAT

Section 408 of Companies Act, 2013 defines NCLT and it specifies that the Central Government shall constitute a Tribunal to be known as the National Company Law Tribunal composing of President and other Judicial and Technical members, to exercise and discharge powers and functions as prescribed by the Act or any other power delegated to them by way of any other enactment or a Notification by Ministry Of Corporate Affairs.  Similar to NCLT, NCLAT was established as per Section 410 of Companies Act which states that the Central Government, by way of notification shall constitute an Appellate Tribunal to be known as the National Company Law Appellate Tribunal comprising Chairperson and Judicial and Technical members, for hearing appeals against the orders of the Tribunal.

However, it provides a Condition that technical members of NCLAT shall not exceed 11 members. Initially NCLT and NCLAT were given Jurisdiction over the Following matters:

It is important to note that the Company Law Board would cease to exist after the establishment of NCLT and NCLAT as per Section 466 of Companies Act, 2013.

Difference between NCLT and NCLAT

Though NCLT and NCLAT were established by the virtue of same Companies Act but there is some difference between them which is explained in the following table:

The need for a uniform code for adjudicating corporate disputes was first suggested by the Justice Eradi Committee which was set up by Central Government in the year 1998 for reforming the law related to insolvency of companies and winding up. The Committee submitted its report in the year 2000 and as per the recommendation of the Committee, Companies (Second Amendment) Act, 2002 was passed and the amendment stated that there is a need to constitute National Company Law Tribunal and National Company Law Appellate Tribunal which will act as a Uniform body for Adjudicating Corporate Disputes. There were various legal challenges to it and the constitution of NCLT and NCLAT under Companies (Second Amendment) Act, 2002 were challenged on ground that it is unconstitutional.

The  Supreme Court was concerned with the qualifications of the technical Members of the NCLT as the court in the case of  Union of India v. R. Gandhi stated that “only officers who are holding the ranks of Secretaries or Additional Secretaries alone should be considered for appointment as technical members of the NCLT” whereas Section 409(3) of Companies Act, 2013 Act states that Secretary to the Government of India or equivalent officers are eligible for appointment as technical members of NCLT and NCLAT. Therefore, SC stated that corrections need to be made to Section 409(3) of  Companies Act,2013 so that it follows guidelines made in Union of India v. R. Gandhi.

(iii) Structure of selection committee for the appointment of members

Supreme Court was concerned with selection committee and powers granted to it under S. 412 (2) Of 2013 act which provided for a 5-member selection committee without a casting vote to the Chief Justice of India (or nominee) as it was against observations made by SC in sub-para (viii) of para 120 of Union of India v. R. Gandhi where it stated a 4-member committee to be headed by the Chief Justice of India (or nominee) with a casting vote. And it thus it held Section 412(2) of the Act, 2013 were not valid and issued direction is issued to remove the defect.

Transition from CLB to NCLT and NCLAT

As seen earlier the Journey from Company Law Board (“CLB”) to National Company Law Tribunal (“NCLT”) has not been smooth and has been full of legal challenges in various cases as well as procedural bottlenecks. Even after legal challenges were overcome by the Judgement of Supreme Court in the case of Madras Bar Association vs. Union of India & Anr[5] where the Apex Court held that constitution of both NCLT and NCLAT is constitutionally valid and under  Indian Constitution, it is open for the legislature to establish tribunals as alternatives to the courts as a forum for adjudication on specialized matters, provided the tribunal in question has all qualitative trappings and competence of the court sought to be replaced. Even then there were questions regarding the status of pending matters before CLB, BIFR, AAIFR and matters relating to company’s accounts, freezing of assets, class action suits, conversion of a public company to a private company which were pending at different High Courts, when their jurisdiction was transferred to NCLT, the power from existing bodies to NCLT and NCLAT was transferred gradually by the way of notification. However, cases initiated before the CLB under Companies Act, 1956 were immediately transferred to the NCLT.

The below chart explains the how proceedings before old courts would be transferred to NCLT in a Phased matter: 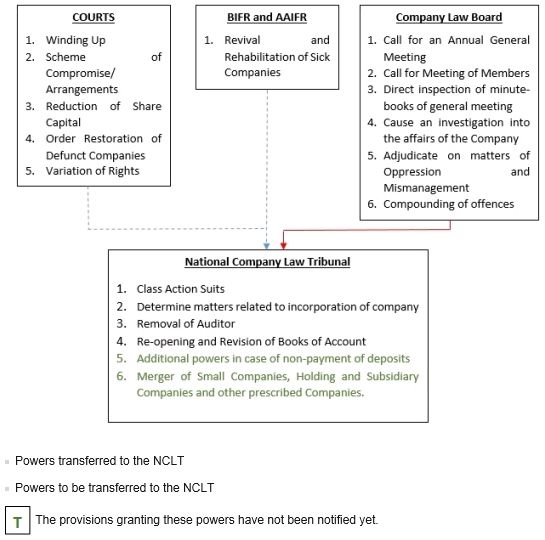 NCLT and NCLAT have been established to act as a uniform forum for adjudicating disputes relating to working of companies where adjudicating it in a timely manner will help in smooth running of the economy. The earlier regime of the Company Law Board failed miserably because they were not useful in adjudicating disputes in an effective and time bound manner. The earlier regime had a lot of bottlenecks which did not help to revive Sick Companies and instead led to prolongation of cases. Though NCLT and NCLAT are doing great work in streamlining the system, a lot more needs to be done. There is a need for improving the infrastructures at these Tribunals, increasing the Number of Benches as well as sanctioning of judges which will help in deciding cases in a time bound and effective manner and thus would reduce precious time and resources of companies which can be used by companies in growth of economy of India.

[3] Detailed guidelines can be accessed at https://www.indialawjournal.org/archives/volume3/issue_3/article_by_vyapak_desai.html