This article has been written by Sakshi Jain, pursuing the Diploma in Intellectual Property, Media and Entertainment Laws from LawSikho.

If you are even slightly aware of the term ‘Copyright’, you are likely to know one thing for sure: it is not a perpetual right. So how, you might wonder, have companies like The Walt Disney managed to maintain its copyright on one of the most celebrated characters ever, ‘Mickey Mouse’ for almost 100 years? Well, tighten up your seat belt, because this article will take you back to the 1920s when this mouse was born, and the magical journey of Disney began.

This article will explore the relevant copyright laws underlying Disney’s characters in light of our beloved Mickey Mouse’s impending copyright expiration, along with the policy tensions underlying the scope for any further copyright extension in the future. By the end of this article, you will know how this little mouse has managed to keep changing the Copyright Law of the US till now.

Birth of the world’s most iconic character : the beginning of an era

When Walt Disney was in the process of stepping his foot in the entertainment industry, he was encouraged by his distributor, Charles Mintz, to come up with an idea of creating a new cartoon character that could be pitched for Universal Studios. Walt did that, and in the year 1927, a cartoon named ‘Oswald the Lucky Rabbit’ made his debut in an animated short film, Trolley Troubles. America instantly fell in love with Oswald, and this rabbit turned out to be Walt’s most noteworthy accomplishment to date. Unfortunately, this celebration was short-lived for Walt. In the year 1928, when he approached Mintz about negotiating for their contract to be renewed, he was informed by Mintz that many of his animators had agreed to work for Universal Studios. Further, he was told that as per their original contract, Oswald belonged to Universal, and not Disney. Walt left the meeting then and there, without signing any sort of new contract with Mintz, and without claiming his rights on the rabbit that was his own creation, as he disagreed to abandon his own studio and work for Universal.

As the story goes, it was on his train ride back to his home from his meeting with Mintz, that Walt came up with the idea of creating none other than the world’s most iconic character of all time- Mickey Mouse. And this marked the beginning of an era- The Mickey Mouse Era. From his previous experience with Oswald, Walt had learned a crucial lesson, to be careful about whom he must trust, and to always make sure to own all the rights on every character that was his own creation. In the decades ever since, the Walt Disney Company has continued to maintain this practice by extending the copyright protection of each of the characters that it owned, including the big cheese himself- our very own, Mickey Mouse.

Though Disney has been successfully protecting its characters under copyright law to date, this continued protection is soon reaching its expiration period. The last time when copyright protection was extended, was in the year 1998 when the Copyright Term Extension Act (CTEA) was passed by Congress into law. It resulted in extending the copyright protection of works that were published in or after the year 1923 for another 20 years.

Since Mickey Mouse was created in year 1928, the copyright protection that it currently enjoys is set to collapse on January 1, 2024, which is less than 3 years from this day. Now, this might sound like an alarming situation to a lot of die-hard Disney fans, but let me clarify, that this copyright expiration that Mickey Mouse will face in the year 2024 will not result in a complete expiration of all the rights that are vested in the mouse. It, however, marks the beginning of a steep expiration slope, not just for Mickey, but for Disney’s entire cast of characters. Further, it is pertinent to note that while Mickey might be able to seek some refuge from falling into the category of the public domain through the help of trademark law, this protection will probably be unavailable for the majority of Disney’s other characters.

The road to Sonny Bono Act

During the time when Mickey Mouse was born, in the year 1928, matters related to copyrights in the United States were governed by the Copyright Act of 1909. Federal copyright protection was granted by the Act to the works that were original in nature, published, and had a notice of copyright affixed to them for a period of 28 years (counted from the date of publication), and an option of renewal for another 28 years of protection. Upon the end of this duration, the work would fall under the category of public domain. As per this, Mickey Mouse could be protected from falling into the category of public domain only until the year 1984. Disney was well aware of this deadline and was duly committed to protecting Mickey Mouse, a character who was not only the mascot of Disney but also a huge source of revenue for the company. So with the aim of protecting Mickey, Disney began lobbying Congress.

Disney was adamant to continue enjoying its copyright protection. As a result, when the year 2003 was moving closer, Disney once more began lobbying Congress and succeeded yet again. This resulted in the Copyright Term Extension Act (CTEA) of 1998, which is also known as the “Sonny Bono Act” extending the term of corporate copyrights from 75 years to 95 years. This brings us to the current copyright protection that Mickey Mouse holds, which, as per Sonny Bono Act, is in a position to lapse on January 1, 2024. 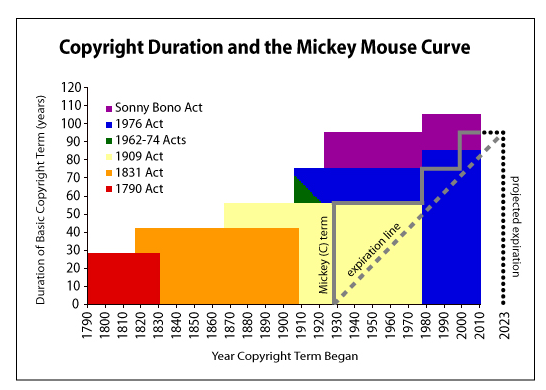 What will happen to Mickey’s copyright protection post this?

One must know that not all of Mickey’s copyrights will lapse in 2024. The only copyright protection that will lapse in the year 2024 is one of Mickey’s original incarnations, the way he appeared in his first film ever, Steamboat Willie. Disney will still hold its copyrights on later incarnations of the mouse. So in the year 2024, the public, in general, will have a right to create works on the original Mickey (who is stylistically different from the modern-day Mickey, black and white in color, and has no gloves), but not the “present-day Mickey” (as he appears nowadays, in full color, and with gloves). The public will have to wait for one more year until 2025 to utilize the present-day Mickey, as that is when the modern-day Mickey’s copyright term will expire. Whereas if the public wishes to utilize the Sorcerer Mickey, who appeared in the film Fantasia, they will have to wait until 2036, as the film was released in the year 1940. The use of other, more subtle, changes to Mickey will require careful attention so as not to run afoul of Disney’s still-existing copyrights before they too fall into the category of public domain.

With a history of successfully lobbying for copyright extensions, the public is left to wonder if Mickey Mouse will ever fall into the category of public domain. The fact that Congress has left the copyright expirations under the CTEA in place (rather than extending them again) and the fact that works covered by the most recent extension have officially begun falling into the category of public domain seem to be a good indication that Mickey’s copyright expiration in the year 2024 is inevitable. Furthermore, the political climate for copyright extension has changed, and the need for continued innovation and creativity has become an important public policy concern, something that no longer weighs in favor of extending copyright protection terms.

The bitter truth is that Disney’s copyrighted works are headed toward falling into the category of public domain and will eventually get there. Nevertheless, to some relief to Mickey fans, while his copyright expiration seems inevitable, Disney does own several trademarks for the mouse, and the best thing about trademarks is that, unlike copyrights, they do not expire. Mickey Mouse himself is a trademark of Disney. So even if Mickey Mouse’s copyright protection comes to an end, Disney will still be able to protect him, to some extent, through trademark law. But it is pertinent to note that while Disney may be able to protect Mickey through trademark law, the approach will likely fall short for many of its other characters.

Historically, three arguments favoring the extension of copyright have been advanced:

These arguments have been condemned by copyright scholar Dennis Karjala, contending that these extensions in copyright have seriously affected the general public at large. He further added that the practice of copyright extensions has limited the general public’s freedom to make derivative works. It serves only to boost corporate profits for an elongated period of time and create a wealth transfer from the United State’s general public to current copyright holders through the continued payment of extended copyright royalties. As per him, these copyright owners are in most cases large companies and, in any case, may not even be descendants of the original authors whose works created the revenue streams that started flowing many years ago.

Indeed, while Congress may have been persuaded to extend copyright protection more than once in the past, the political climate for copyright legislation has changed radically. Today, there exists a well-organized, grassroots lobby against copyright extension.

So, what will Disney do now? The company could try to change the law via further lobbying efforts. Disney’s past efforts have served to protect countless characters in its collection, including Mickey Mouse. And while some may find it ironic that Disney has pushed for copyright extension when many of its own works are based on works in the public domain, it is not ironic at all, but rather, it is the point. Disney is well aware that others can and will use words that have fallen into the public domain and it knows that its works will be no exception when the time comes. In terms of copyright protection, Disney and others may continue pushing for further extensions and may ultimately continue to get them, so long as Congress goes along for the ride. However, in light of the changing political environment surrounding copyright extension, this seems unlikely.

We will have to wait and see where Disney and the law go on this issue. Although extending copyright protection indefinitely and protecting all of Disney’s characters forever, through one channel of law or another, may seem impossible, it was Walt Disney himself who once said: “It’s kind of fun to do the impossible.” While the Disney fan inside me would love to see Disney characters be copyright protected indefinitely, the reality is that indefinite copyright protection, for one or for all, will undermine the ideals of a public domain that promotes and enhances the innovation of and access to creative works.

At least, until further developments on the issue or the expiration of their copyright protection, Mickey Mouse and all his friends will remain in the “House of Mouse” and out of the public domain. And, with just under three years until Mickey Mouse’s first copyright is set to expire, Disney still has time to surprise us before the clock strikes midnight.