This article is written by Sukhmani Singh. 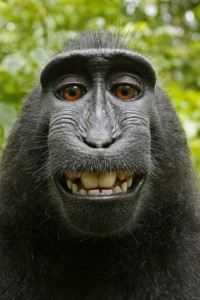 In an unusual twist of events, something rather unimaginable happened when the pictures of a black macaques monkey went viral over the internet. A wildlife photographer, David Slater, was in Indonesian National Park when this incident happened with his camera equipment. While he was visiting the park, he decided to get close to the animals. So, he teamed up with a local guide and embarked on a 3-day journey to befriend these creatures. Slater says that these monkeys are basically inquisitive by nature and were really interested in the equipment that the photographer was carrying with him.

The incident happened when the photographer set up his camera on a tripod and left his equipment for a few minutes. On his return, he saw that the monkeys were going kind of crazy with his equipment. The camera captured more than 100 pictures of the monkeys in a series of different poses. Hence, the “monkey selfie” was taken this way.

The question arose when the photographer requested Wikimedia to take off the Monkey Selfie as it was his camera by which the selfie has been taken. The photographer’s request was not accepted as he did not have copyright over that picture. This stunt has cost David Slater a lot of money.  In a nutshell, the issue is where a photo taken by an animal with the equipment of a photographer shall become a part of the public domain or the property of the owner of the camera.

If we go by the legal pseudo doctrine that says “he who takes the selfie, owns the selfie”, it would be safe to say that the monkey, undoubtedly, has copyright ownership of the selfie. When this doctrine developed, the doctrine was restricted to human beings. With an animal picture in the view, things have taken the concept of copyright ownership to another level.

Copyright is a form of intellectual property that is applicable to any expressible form of an idea or information that is creative and different. Nowadays, copyright has gained a lot of significance because of the development of technology. This “Monkey selfie” has caused a lot of debate over copyright. The author of the work is the copyright owner. In this case, it would be the monkey but, it has been stated by USCO that copyright for work by animals cannot be accepted and registered. This means that the picture does come in public domain– the statement that appeared on Wikimedia that was challenged.

The stand of various countries with respect to copyright ownership by an animal is as follows.

The US Copyright Office has clearly stated that an animal, ghost or divine being cannot hold copyright over a picture or any other piece of art. The office has stated that it cannot register work that has been produced by nature, plants or animals. In the same way, the office can’t register work by a divine entity or supernatural beings. The exception being that where the work was created by a human being whereby taking inspiration from a divine source was acceptable.

UK shares a similar stance as that of the US. UK’s copyrightable work laws are similar to that of US. The Intellectual Property Office says that according to the UK law, cannot can’t own copyright. The point of discussion is the extent of the contribution by the photographer. If the photographer has a major chunk of contribution of the making of the creative work, then a decision has to be taken by the courts. The product needs to be an attempt of a conscious mind. The law in UK is a bit unclear. But, in short, the law says that if you have consciously attempted to create such a piece of work, then you do have copyright over it. A fluke would not be rewarded. Again, the situations shall vary but, as of now, David Slater has no copyright over the picture.

When we talk about India, the current situation has not been dealt with under the law. The law does say that copyright is vested with the author of the work, unless it is clicked by a person’s employee or has been specifically commissioned to take the photograph. In this case, it is the monkey who took the picture, and clearly the monkey was nor the employee or was commissioned for taking the photograph, the copyright could not have vested on the photographer. However, the monkey could be considered as the author of the photographer, but under the Indian laws, animals cannot be considered as legal person to claim ownership.