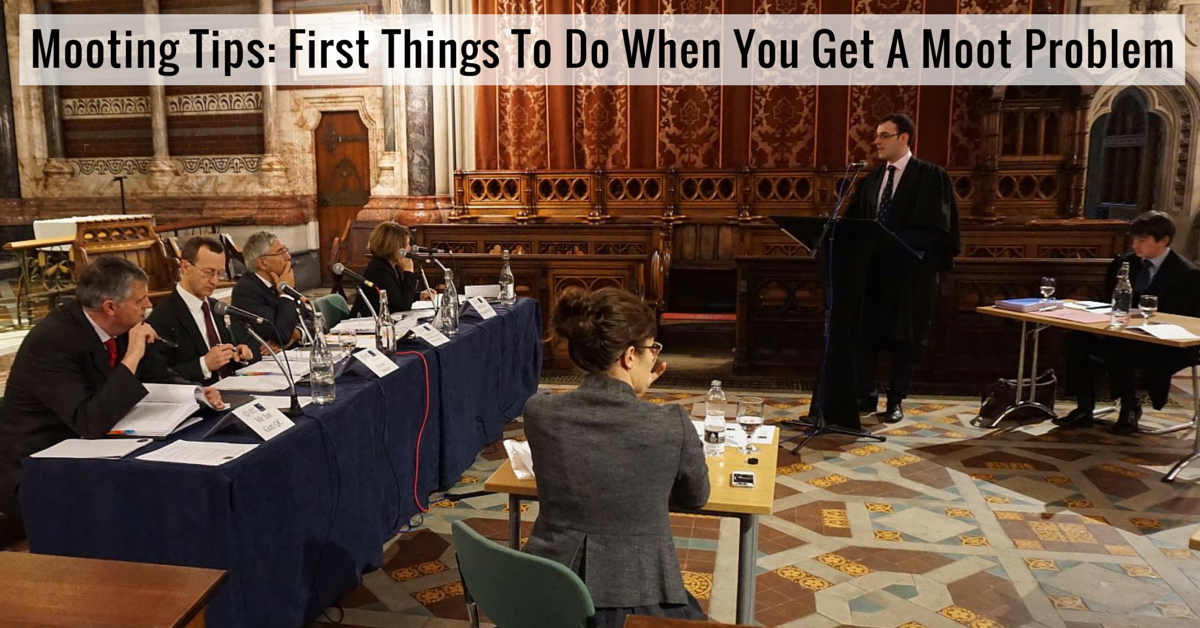 Jurisdiction is what determines whether a court will hear the case on merits or not. If a court does not have jurisdiction over a matter, they will throw out the case and tell the petitioner to go to the right court or tribunal which has jurisdiction. For this purpose, you need to be able to clearly answer these questions

Which court/tribunal are you appearing before (the moot court problem should clearly mention that)? Under what law does it have jurisdiction over the matter? Can jurisdiction be challenged<!–more–> on some grounds? Is it appellate or original jurisdiction?

Identify the issues from the problem

It is unlikely that a moot problem will not identify the issues for you. The most common practice is to identify 3-4 issues that you are supposed to argue on. All major moots like Vis or Jessup, and even major Indian moots do that. However, it is possible that some moot problem did not do so. If that is the case, you have to identify the issues. Be careful there – think of the points of conflict of interest between the parties and decide on issues based on that. Jurisdiction must be established first before you can argue case of merits, and even in memo you must argue on jurisdiction unless issues are specified by the problem and jurisdiction is not one of the issues, which is again, not heard of. Similarly, Quantification of damages/ extent of sanction is often a major issue

Read the facts and argue from both sides

You need to know the facts backward, and you should be able to use the fact to your advantage. Be clear about what facts helps your case and which ones are against you. When there is no law to argue in your favor on a point, or if there is a clear judgment against you, you get down to wrestle over facts and show that the specific case which appear to be against you actually does not cover the fact scenario in hand.

Know the arguments and counterarguments

You need to be acutely aware of each argument, both of the legal and factual kinds, from either side no matter which side you are going to argue from. After that, you have to prepare a response to those arguments. Knowing the first level of arguments is just the beginning, you can not do well unless you go into the next level – counter-arguments. It is your ability to engage in logical arguments and counterarguments (with judges in most cases), especially when it comes to a moot in India, is what wins you great scores. You need to engage in arguments and counterarguments, I repeat, logically, calmly, and politely. Counterarguments are not to be presented in a belligerent manner, but more in a form of an answer, as if you are trying to satisfy the curiosity of the judge.

Preparing for this is very important – you can not engage a judge in this way unless you are truly confident, and confidence comes in large measures from knowledge and understanding, apart from self-esteem.

Pay attention to details in the memo, make it look great

Memorial is a written version of the arguments. It will have common sections such as a statement of jurisdiction, statement of facts, the summary of arguments, pleadings, and authorities, and of course, not to forget the prayers. A good memo writer must have tremendous attention to details – such as formatting, definitions, list of abbreviations and glossary, proper formulation of headings and sub-headings, flow of arguments and use of authority, adequate and uniform footnoting. Content, of course, is important, but not as important as how the memo looks and feels when someone tries to glance through. Yes, most judges tend to glance through the memos and mark you on the basis of that. Therefore, the task is to make a beautiful and professional looking memo that seems to be well researched – from the number of footnotes, structure of arguments and coverage of issues. Look at some good memos before you start writing on your own – they are available on the official sites of moots like Jessup and Vis (Vienna and Hong Kong). Just look up the best memos of the yesteryears.

You need not write every argument you may take up during oral rounds in the memo itself – especially counterarguments, <i>i.e. </i>arguments used to answer questions. Just try to ensure you are not missing any major argument or an authority in the memo. If you do, you can still use them up in the oral rounds.

One more time, how the memo looks matters a lot.

Speaking – how to handle oral rounds

This is the most important part. if you do this well, you may get away with many mistakes everywhere else. If you don’t do this very well, mooting would not be as much fun.

Do not think whether you are a good speaker or not. Some people may have been born to be effortlessly good speakers, but there are the rest of us who can match them if we learn the basics. Here are some things on which no one will tell you to work on, but you need to.

Try speaking out loudly imagining that the room is full of people. You need to be heard by everyone. Are you speaking in your most impressive tone? Try a few different tones. Which one sounds best to you? Take suggestions from friends too, if needed. Practice speaking in that tone as you speak to people. Yes, this will help you in the moot, and help a lot more in your life generally.

most people put on distracting mannerisms while they try to give public speeches. Verbal mannerisms. Body language. Distracting fidgeting. These can take away a lot from your speaking. Get yourself filmed. Analyze your mannerisms. Ask others for their opinion. Then go watch “Thank You for Smoking” or “Scent of a Woman”. See the mannerisms everyone loves. Copy if you can – hopefully over time you’ll develop your own endearing mannerisms. These subtle behavioral nuances can go a long way in making a powerful impact in front of the judges. Although adjusting speech and mannerisms for Moots sounds vague and inconceivable, this online course can help you with exactly that, and more.

It’s a fatal mistake to be monotonous. You’ll turn off the judges. They will get so bored that they will not even hear the brilliant arguments you have come up with. They will be so disinterested that they will not ask you questions except as a matter of routine maybe. If you don’t want that – try and make sure you have life in your voice, an energy in how you carry yourself as you proceed through arguments and never drag. Condense your arguments. State and argument, see what can be asked by a judge based on what you just stated, and then think if you can say it in a way to preempt that question altogether, of course without launching in a long rant but by being economical with words.

4. Use examples, analogies and common sense.

Without these, law is dry and arguing is boring. Use the liveliest examples and your effort in making the courtroom experience more enjoyable for you and for the judges will be rewarded.