In this blog post, Kalpana Purushothaman analyses the new child labour bill and raises some important concerns that arise in the wake of this bill.

After a period of 30 years, the government has introduced a new child labour law which claims that it bans all forms of child labour till the age of 14. Sadly, the country is buying into an illusion. The truth is that the amendment to the Child Labour Prohibition and Regulation Amendment Bill 2016, passed by the Parliament continues to allow children to be employed in family-based enterprises. Secondly, the employment of children in most hazardous occupations like tanning, bangle-making, zari work, carpets, domestic labour, e-waste and numerous others that till recently were recognised as hazardous for children will now be permitted.

The government claims that it has b 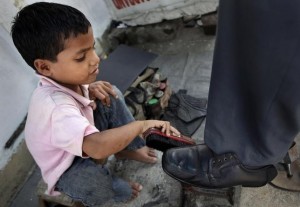 anned all forms of child labour up to the age of 14 years, however, with the new Bill it has de-incentivized education by legalising family-based work. ‘Family’ is defined in the proposed bill as child’s mother, father, brother, sister and father’s sister and brother and mother’s sister and brother. It uses the word ‘help’ to describe the child’s involvement in the family enterprise (after school hours and during vacations). The problem lies in the inclusion of this proviso in the law, especially since we are well aware that the notion of family is very extensive and ambiguous in our country.

This is exactly the kind of legal loophole that has led to the continuation of child labour till now. Past experience of implementation of the law that had a similar proviso (Section 3 of the CLPRA, 1986) has amply shown that this was the one way in which children were tied to home-based work and exploited.

Since most family based occupations in India are caste based, the exception in Section 3 in the law, which allows children to work in family occupations, will only keep the caste system intact. For example, a potter’s son/daughter to be a potter, a weaver’s child to be a weaver, a tanner’s child to be a tanner and so on. In a feudal, caste-driven Indian society what do these provisions amount to? Without a doubt, this will worst affect the Dalit and the marginalised who are at the bottom of the caste hierarchy, a ghastly example of which was the recent beating and humiliation of several Dalit youth in Gujarat. 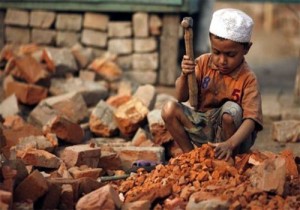 processes that are in the Factories Act which covers only the organised sector. This reduction in the number of occupations that fall into this category and no provisions in it for an increase in this list, means that children will be employed in domestic work, hotel and dhabas, brick kilns and several other such places that have now come to be recognized as extremely hazardous occupations and fall in the unorganized sector.

Although the Government’s data claims there is a significant decrease in the number of child labour in the country, in reality, the number of children already working in the unorganised are multiplying. For example, the 2011 Census shows that child labour in urban settings has actually increased – and that is where the unorganised sector is. Besides, every day newer ‘occupations’ are coming up which are hazardous and dangerous. But they will not find a place in the law.

No Rights for Poor Children

While the Parliament unanimously passed the Indian Institutes of Technology(Amendment) 2016 to benefit the young wizards of India, the same Parliament, barring MPs from the ruling NDA, expressed surprising empathy for India’s children to oppose the passing of this regressive Bill. Indeed, this Bill must be seen and analysed in the context of the dilution of labour laws and standards in the country and the move towards greater informalisation of labour and the push towards manufacturing in the unorganised sector. As Mr. Shankar Aggarwal, Secretary Ministry of Labour and Employment is quoted saying “All the amendments are being done keeping in mind three things—need of the times, workers’ protection and creating an environment for more job creation,” ….“Every year, the country needs to create an excess of 10 million jobs and for that manufacturing sector is key. The proposed labour reforms will help the pace of industrialization while keeping workers’ rights intact.” 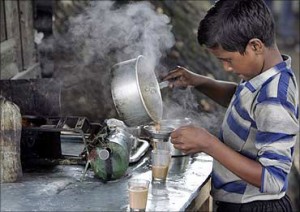 Clearly, the main stress of the Ministry is to create jobs to meet the needs of manufacturing, not so much to protect children. In this backdrop, when production is pushed into the homes, who is to regulate the entry of children into the workforce? This is nothing but keeping the un-scrutinised and the unregulated informalisation of labour alive so that corporates can ‘make in India’ without having to deal with the labour unions and the labour laws. 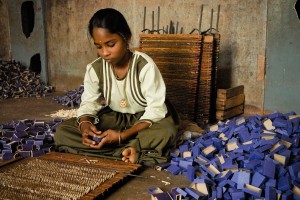 It seems that the government is in a state of intellectual and policy disarray. While on one hand it talks about Skill India, and Girls’ education, on the other hand by passing this law dilutes the efforts keep their children out of school, as the Parliamentary Standing Committee examining the Bill had cautioned: “The ministry is itself providing loopholes by inserting this proviso since it would be very difficult to make out whether children are merely helping their parents or are working to supplement the family income. Further, allowing children to work after school is detrimental to their health as rest and recreation are important for their physical and cognitive development.”

Child labour in India has become so normalised that there is neither shock nor shame – it is a ‘necessary evil’. It is evident that the government is happy to put the burden to make ‘Make in India’ a success only on the children from Poor, Dalit, Muslim and Tribal families but shouldn’t a country vying for the global high table aim higher for its children?

Do consider signing the petition, “President of India: Request for review of Child Labour (Prohibition and Regulation) Amendment Bill.”

I think this is important.