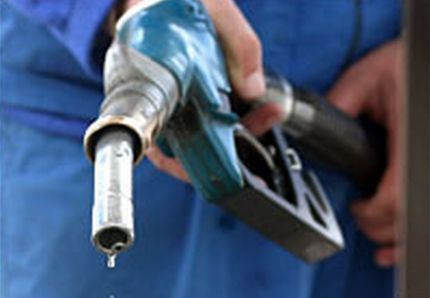 This morning, prompted by increasing concerns about terrorism, oil prices reached a record high as the cost of a barrel of crude is a whopping $44.34.  Wow, it seems shocking that a product of finite supply gets more expensive the more we use it.  Now the terror alert means higher oil prices, which oddly enough means higher profits for oil companies giving them more money to give to politicians whose policies may favor the oil companies such as raising the terror alert level.  As Simba once told us: “It’s the circle of life.”  – Jon Stewart 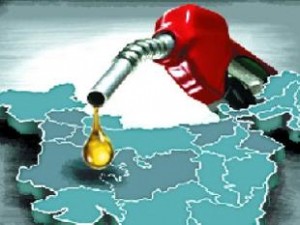 Oil is considered to be one of the most essential commodities[1] around the world, especially in India due to its varied and excessive usage in the form of gasoline, kerosene, LPG, petrol and diesel, polythene etc.

Its importance can be gauged from the fact that spike in prices of some of the sources of refined crude oil like petrol and diesel can have a cascading impact on the lives of common men having low per-capita income and limited resources, who to a large extent depend on it to earn their livelihood by direct and indirect means in order to satiate all their needs. Crude oil and its conversion into various forms help the economy to smoothen and boost its pace and enliven the diverse lives in various forms.

India conceptualized the New Exploration and Licensing Policy (NELP), during 1997-1998 and implemented it in the year 1999. This policy was brought into effect to explore the area of crude oil with the enhancement of participation amongst the private sector, public sector and foreign companies. Initially, after the liberalization process of 1991, India had opened up its core sector of hydrocarbons to such participation, which was not the case before as initially it was explored by big public sector companies only, like ONGC and Oil India Ltd. (OIL).

This participation was allowed to have- 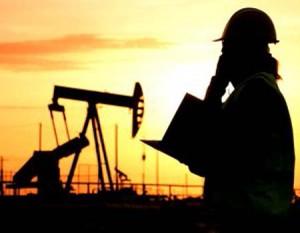 India has dedicated specific laws like The Petroleum Act, 1934[3] to regulate petroleum products and for exploration of crude oil, government prepared National Exploration and Licensing Policy. Apart from the dedicated laws, there are general laws like The Essentials Commodities Act[4] or rules and regulations by the dedicated ministry or the Nodal authorities like The Directorate General of Hydrocarbons (DGH). The DGH usually deals with the regulations that govern market factors like price determination, rules for Oil Marketing Companies, etc, whereas exploration and production is overseen by the Ministry for Oil and Natural Gas. Oil and Gas sector is divided into 3 sectors and related laws in it are[5]–

-The relevant legislations are as follows: Oilfields (Regulation and Development) Act, 1948 for the basic regulation of oilfields and the development of mineral resources. It regulates the licensing and the leasing of petroleum and gas blocks by the Union Government. Petroleum and Natural Gas Rules, 1959 provides for matters such as, where and by whom applications for mining leases may be made, the terms upon which such licenses are granted, the maximum area and time frame for leases, etc.

-The Petroleum Act regulates imports into India, transfers within, storage, production, refining and blending of petroleum.

-There are also various regulations which are framed by the Directorate General of Hydrocarbons. Under the Petroleum and Natural Gas Regulatory Board Act, 2006 (PNG Act), there is a Regulatory Board established under Sec. 3(2) which is authorized to regulate the midstream sector and to promote fair trade and competition amongst oil and gas companies

-Petroleum and Natural Gas Regulatory Board Act, 2006 (PNG Act) to regulate the downstream sector activities like refining and distribution etc.

-Oil Industry (Development) Act, 1974 to make easy way for increased self-reliance in petroleum and natural gas through various measures such as providing financial assistance to the organizations engaged in development programs of the oil industry.

Administered Price Mechanism as a Means of Government Control

Oil prices in India are also to be seen from the perspective of interference by the government or free market prices. Initially, government interference was by way of Administered Price Mechanism (APM)[7], which was later struck down by the New Exploration and licensing policy, keeping in view the growing pressing needs of the sector like investment and profitability, which was earlier affected by APM wherein the Government regulated the price of products which was not compatible with and proportional to the market prices but was less of what wasthe trading price of crude related products in the market, which in turn affected the government finances and profitability of oil management companies. As a result, revenues needed for exploration related activities were stuck as companies were not able to generate risk capital.

APM products were generally essential commodities in demand, whose prices were set low by the Government at a time when their prices were high according to the market forces. APM regulated commodities are petrol and diesel, which are always in high demand. Prices of non-APM commodities are not in very high demand and priority by the government thereby not resulting in cost subsidies.

During the APM regime, the Government had to shelve out huge subsidies to offset high prices of essential commodities on consumer. However, after riddance from the APM, the Government deregulated the prices of petrol and diesel in a regulated manner[8].This was done with the view to generate investors’ interest in the oil sector. This indeed helped the government to inculcate interest of the investors and explorers. The OMCs found their books showing profits due to the charging of high prices from the customer by way of increase in taxes by the government at the time of plummeting oil prices so as to compensate for the shortfall in revenues by generation of cash.

This regulated deregulation is also leveraged by the government at present, i.e., the time of global fallout in prices, by selling petrol, at a price more than the cost incurred for exploration and refining with added taxes at high rates. The Central government, to increase its revenues and help the Oil Management Companies (OMCs) to recoup their profits which were earlier lost due to the provided subsidies, only marginally reduced the prices for the customers even when the oil prices plunged to around 30-40 dollars from the previous high prices of 120-130 dollars per barrel. This assisted the government to reduce its subsidy bill on oil imports and to help the OMCs by allowing it to sell it to the customers at marginally reduced market prices.

Determination of price components, break-up and divisions of the Petrol and the Diesel[9]

Here is a step by step breakup of the pricing formula for petrol: 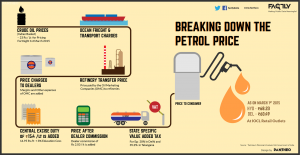 For Instance in 2013, petrol break-up in Delhi was-

* VAT – Rates of VAT varies on state on state. 20% VAT on Petroleum (Petrol) Products in Delhi. While Goa has just .1% VAT making it the lowest Petrol Prices in India. Some State Government even has 23% on Petrol and also additional cess of up to 3% on Fuel Prices. 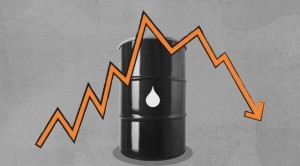 -Increase in supply of crude oil due to newly found reserves of shale oil in US has escalated the production to an all-time high. OPEC (Organization of petroleum exporting countries) members, fearing the ending of their monopoly, and under pressure from Saudi-Arabia (one member of OPEC) are relentlessly producing oil to counter the production of US, which is driving prices extremely low.

-Sentiments also affect prices as the market reacts to it. For instance, if there is a rumor surrounding that demand is going to increase, then this can lead to increase in prices and vice-versa.

-As can be seen from the recent decision of Oil Producing and Exporting Countries (OPEC) members, led by the Saudi Arabia, to not reduce the supply of oil even after the increase in supply due to shale oil production in the US, resulting in supply glut and unprecedented low oil prices. After such decision by OPEC members and due to their high dependence on revenues from oil, it forced the US producers of oil to reduce the production as they were getting into losses due to persistent decision of OPEC to not reduce supply.

To conclude, it can thus be said that crude oil and its various forms are a major source of economic growth of any country and countries having such reserves can reduce their import bill on such oil to a  large extent if the demand is lesser than the supply of it in that country. In India, due to the crunch of such reserves, 70% of total imports is related to crude oil. As we know, the demand of crude oil is inelastic because even with the increase in prices there is not a proportionate decrease in demand. There can be an increase in demand in such circumstances under certain conditions.

So, at last, it can’t be said that the use of crude oil is expected to decline or vanish in the near future as it is a commodity that serves as an engine and backbone of all economies. Even if we see the development of alternate sources of energy, the investment in it remains high in certain countries, which may not allow considering their financial constraints, to switch to sources like renewable sources, etc.