Open source licenses are a grant of permission by the owner of the open source software (OSS) to exercise the exclusive rights held by the owner. The rights range from copying and creating derivatives of the product to its distribution. These licences are akin to unilateral contracts and you are only bound by it, should you choose to accept them. They appear similar to the EULA in paid software. The licensing terms are broadly categorized under two different types: Copyleft and Non-Copyleft or Permissive.

A Copyleft Licence is an agreement whereby the source code of the OSS is allowed to be modified and freely used for distribution subject to the end product being bound by the same licensing conditions. This ensures a higher control over the distribution of the OSS and its usage because of this reciprocal nature of the licensing terms. While the Permissive Licenses allows the user to re-license the subsequent work created by modifying the source code under a different license.

What are the most common open source software licenses?

The first open source license was envisaged by University of California, Berkeley in an attempt to further its educational and research initiatives. It was known as BSD. In the present scenario, the three most popular and prevalent open source software licenses are: GPU License(GPL), Apache and MIT. These Licenses are have different owners. However, they all have the approval of the Open Source Initiative. You can find more such approved licenses here. 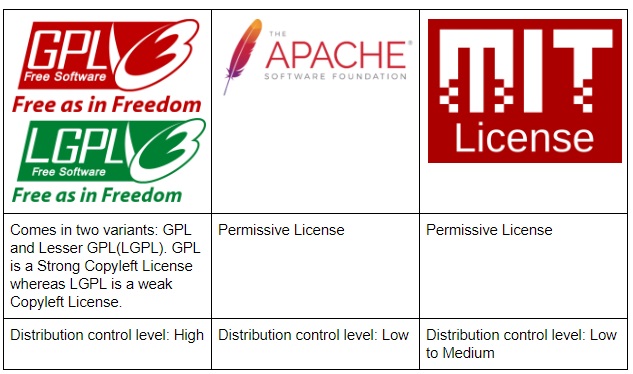 Which is the best open source license for your business and and why – Apache, MIT or GPL?

Owned by the Free Software Foundation, the GPL is available in two variants; the General Public User License(GPL) and the Lesser General Public User License(LGPL). These licenses are copyleft licenses. The difference being that the GPL is a strong copyleft whereas the LGPL is a weak copyleft. In a strong copyleft license, if any changes are made to the source code (to read more on what a source code is, click here)  the resulting modified software is subject to the license terms of the original software. This means that often the modified software will also have to be made freely available. The weak copyleft license, however, allows for modifications to the binary files or DLLs  (to read more on what a DLL is, click here) without subjecting the derived product to the same license term. It is important to note that, merely using an OSS with a GPL or LGPL license does NOT amount to acceptance of its terms, unless and until the source code is modified.

It has a patent license (See para11, GPLv3.0) grant without the reciprocity found in the GPL. This means that you can use your own proprietary code and modify the source code and the resultant derived product becomes your own intellectual property. You can now distribute the derived software on your own licensing terms which is forbidden in the case of GPL.

Further, according to the Apache Contributor License Agreement(CLA) terms you are not required to share the modified software which makes it commercially friendly. This

The MIT license has all the traits of the Apache License besides remaining silent on the Contributor License Agreement(CLA) about sharing the modified software.

Here are 2 clauses from the GPL V3.0 that we discussed above which distinguishes it from the other licenses:

“9. Acceptance Not Required for Having Copies.

Each time you convey a covered work, the recipient automatically receives a license from the original licensors, to run, modify and propagate that work, subject to this License.  You are not responsible for enforcing compliance by third parties with this License.”

Here are some key pointers to keep in mind:

Whether the purpose of your project determines which license you would use?

The concept of OSS emerged in order to cater to the needs of educational institutions to further their outreach to impart education and share their knowledge resources. Moodle is one such open source initiative distributed under the GPL license which is used by several universities across the globe to provide online education.

When selling an app

Now, if we look at the booming market of mobile applications we will find several applications which use the Apache Cordova OSS and jQuery distributed under a MIT license. It enables developers to package their HTML or JavaScript codes to create native apps for mobile devices. This saves the developers time and costs by enabling them to use the programming language they are comfortable in, rather than working on an alien platform. The Apache license enables the developers to use external code to modify and add on to the source code to make custom changes to their applications without having to redistribute it on the same license. This helps them tailor the application to cater to the needs of their potential customers without compromising on its profitability. They can further re-license it on their own terms when selling it on the Google PlayStore.

Thus, from the two examples above it is clear that the choice of license is determined by the object of the project. However, it does not mean that the GPL cannot be commercially exploited, as long as the source code of the OSS remains unaltered, GPL can be used to harness profits without being charged a cut for the same.

What makes a software open source?

Free usage does not necessarily mean that the software is in the Public Domain, i.e., they are not covered under copyright laws. A copyright comes into existence as soon as the software is created. In Tata Consultancy Services v. State of Andhra Pradesh 271 ITR 401, the Supreme Court of India held a software to be an Intellectual Property. It is covered vide section 29(o) of the Indian Copyright Act, 1957 (“Copyright Act”) under “literary works” which includes computer programs. Section 14(b)(ii) of the Act gives right to sell or to give the software on commercial rent.

Here comes the catch, the creator of the OSS is not entitled to receive a royalty from it sale. How do you then freely distribute the OSS whilst retaining a copyright to the same in the Indian context? In India the neither the Information Technology Act, 2002, the Copyright Act or the Indian Patents Act, 1970 explicitly recognize the OSS.

However, if we take a look at section 14 of the Copyright Act. Sub-Clauses (b)(i) and 14(a)(ii) allows the copyright owner of a computer programme “to issue copies of the work to the public not being copies already in circulation.”  This allows the OSS developers to license and re-distribute their original software for free as the section 14 cll a(ii) is silent on whether the copies being distributed to the public should be free or not. Section 30 of the Copyright Act confers upon the owner of the copyright, the right to license “any interest” in his work. Such rights acquired by the licensee are the same as that of the assignee of the copyright. The mode of assignment is elucidate under section 19 and the clause 3 of this section expressly provides an option to the licensor to license it for free. Now, the clause 2 of section 19 requires the licensor to specify the rights licensed, along with the duration and its extent. Thus, the open source licenses discussed above fit well within the legal provisions laid down in India.

Should you use open source software or go for a customized for building a product for a startup?

A lot depends on the kind of startup you wish to enter into. If you are a technology startup which aims to provide a new technology to its user such as Uber but it is harnessed using a known medium or platform, your safest bet will be a customised software. If you still choose to go for an OSS ensure that you are using something with an Apache or MIT license, so that you can freely add your customization and further sell it on your terms.

Now, if you are planning on a startup which had more to do with innovative content than a revolutionary technology then you can even use an OSS with a GPL license.

Open source softwares have a huge community of developers which easily beats the compact R&D teams of protected/copyright softwares. Often they have a Contributor License Agreement(CLA) with the developers which helps them innovate their product and have multiple plugins to communicate with other software. Google has effectively utilized their Android developer community to include customizations to their mobile software in their newer versions. Besides this model tech companies also use the dual licensing model. RedHat, a linux based software company provides both open source and EULA license for support or add-on features.

Watch – Linus Torvalds, the mind behind linux on his concept behind open source software and how it changed the tech world.