This article is written by Shreya Tandon, from Vivekananda Institute of Professional Studies (VIPS), IP University, and Kumar Shubham, from NLU, Odisha. The article points out the new education policy introduced in 2020 that aims towards providing recommendations to the older reforms by opening the window of endless opportunities for students from the initial age and taking a notch towards educated and qualified India.

Only bookish language in exams may fetch you with good grades. But will not necessarily provide you with jobs and good intellectual knowledge. Quoting a very famous line from Gulzar’s song from the movie Mere Apne- “B.A. kiyaa, M.A. kiyaa, lagta hai woh bhi anwai kiya” (Despite having great degrees, everything seems to be futile).

Till the date, Indian education has been plagued by the ‘Russian Roulette’ examination system. Russian roulette is when you take a revolver, fill one of its chambers with a bullet, spinning the cylinder and pulling out the trigger while keeping its mouth on your head. The chances that one will survive are five out of six but that last will lead to a bullet in your head which is shot by you. Unfortunately, our exam system has become like this for ages which means you will pass, you may even get decent marks but if you don’t, you are out and you have a bullet in your head. Likewise, without even knowing the importance and having clarity in the subject matter, students were just expected to memorize the concepts and sit in the exam. Most of the students make it but the ones that don’t and flunk become history or maybe a footnote to history. But even if you are among the five lucky ones there is no guarantee that you’ll be placed in the best top shot places. In that case, where will you go with your marks?

Measures to overcome these loopholes in the education system were due for a long period. Finally, the union cabinet on 29th July, launched the new National Education Policy (NEP 2020) which aims to address many growing and developmental changes that are important for the country. The new policy proposes revising the decades old educational policy of India and revamp each and every aspect of the currently prevalent educational structure including its regulating and governing procedure, and to build a structure which is rightly in tune with the aspiring goals of the 21st century education system while keeping India’s traditions as well as its value systems in consideration. It is first such policy in Thirty-four years since the last changes in the education system were made in 1986. The Government claims that these changes will help transform India into a “Global knowledge Superpower”. The Government is aiming to introduce the new system in the upcoming session.

The first education policy (NEP 1968) which was based on the recommendations of the Kothari commission, was introduced in the year 1968 by the Indira Gandhi Government This policy necessitated free and compulsory education for children up to age 14, as enshrined in the Constitution of India. The second education policy (NEP 1986) was introduced in the year 1986 by the Rajiv Gandhi Government. This policy aimed for removing disparities and provide equal education opportunity to everyone, especially to the Indian women and the Scheduled Tribe (ST) and Scheduled Caste (SC) people. The 1986 policy was later modified in the year 1992 by the P.V. Narshima Rao Government. After now after almost three decades, the Modi Government has introduced a new educational policy with a motive to revolutionize the Indian education system.

Previously, the Government began with the process of structuring a new education policy by the means of a consultation platform for an inclusive, participatory and holistic approach, and considering different expert opinions, empirical research works, field experiences, stakeholder feedback as well as the lessons learned from all best experiences. Keeping this in mind, a nine-member panel was framed and the former ISRO scientist, Krishnaswamy Kasturirangan was appointed the head of the panel. Experts from various fields were appointed into the panel by the Human Resource Development (HRD) Ministry.  The committee submitted its report in May 2019 and the draft of the National Education Policy was uploaded on the website of the Human resource Development Ministry and other government portals to invite the views, suggestions and comments of different stakeholders, including the public. The draft of NEP was based on the fundamental pillars of access, equality, accountability, quality and affordability. It was also uploaded on MyGov portal and was open for public opinions.

After the submission of the draft report, the Governments of all the states/UTs and different ministries of the Indian Government were asked to give their opinions and commens on the draft of the National education Policy 2019. Also a briefly detailed summary of the proposed draft was then circulated among different stakeholders, and was translated in 22 different languages and uploaded on the Human Resource Ministry website. Certain meetings and educational dialogues with the State Secretaries of Higher & Technical Education and the State Education Secretaries of School Education were held. The policy underwent several examinations since then, including the latest modification of making it ready for an education system suitable with the current scenario of Covid-19 spread. Prime Minister Narendra Modi also reviewed the bill earlier in the month of May 2020 following which the bill was passed by the cabinet on 29th July.

Developments in the education system of India

Key changes brought in the NEP 2020

The National Education Policy is the new way of structuring the masterminds of incredible India. It is an initiative that gives importance not only to the nerd students but also to the creative minds of this new generation. With the changing centuries, comes the creativity and innovative skills which children possess, and to make efficient use of it so that the country can benefit from these skills, it is necessary to guide the students to the correct path right from their toddler age.

This policy was a much-awaited one but now it has finally come into action. Given below are the highlights of this policy as well as the criticism which concerned many people. 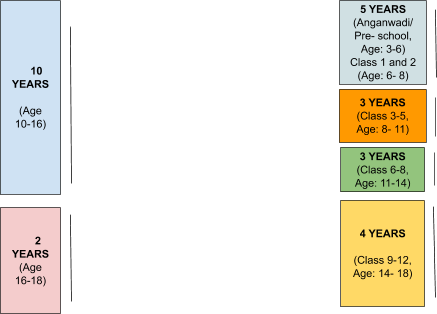 The flaws in the education system vary from generation to generation and with the vintage of a person one asks. Some of the common complaints in the system are that degrees do not fetch you jobs, therefore, half of the population of people are tagged as ‘Unemployed educated youth’, India’s study pattern is more of rote learning and less of practical knowledge, most of the study is irrelevant in real lives, examination system is to exam- centric and so on. Now is the time to fix India’s wasteful degree exam disaster. Therefore, the Government of India introduced the new policy which includes various amendments in the present pattern.

The policy aims at making “India a global knowledge superpower”. The policy also aims at “light but tight” regulation by a single regulator for higher education as well as increased access, equity, and inclusion.