In this blog post, Suraj Pattanaik, who is currently pursuing a Diploma in Entrepreneurship Administration and Business Laws from NUJS, Kolkata, discusses the relevance of Major and Minor Ports in International Trade. 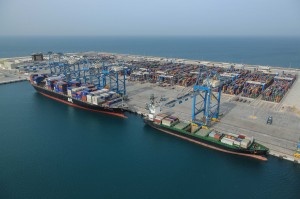 Economic liberalization has led to investments flowing from across the world. For Investments to flow in from various parts of the globe primarily depends on the ease of doing trade and the infrastructural facility that can be availed. Development of infrastructures is one of the key factors in determining the economic development of a country. Along with standardization and trade liberalization, faster, reliable and cheaper transport services are contributing to the integration of production processes at the international level. Thus, ports can be deemed to be the gateway for foreign trades which facilitates a smooth export and import.

Looking back in time, it can be easily realized that ports have contributed in the making of major cities around the world. Early port activities included both military as well as commercial activities.

Gerhardt Muller defines port as: “a harbor or haven where ships may anchor or a harbor area with marine terminal facilities for transferring cargo/ passengers between ships and land transportation.”[1] In this definition the word ‘marine’ may imply that a port is a territorial unit established on a coastline.

Presently the function of a port is not only limited but has expanded to a logistical platform. The efficiency of a port is important in international trade since a seaport is the nerve of foreign trade of a country.

Ports can be classified in various ways based on its ownership and control, purpose it delivers, volume of trade carried on and types of facilities it provides. But in this paper, we are going to distinguish ports on the basis of its capacity or volume of trade it carries on. Thus, it can be broadly divided into ‘Major Ports/ Main ports’ and ‘Minor Ports’. 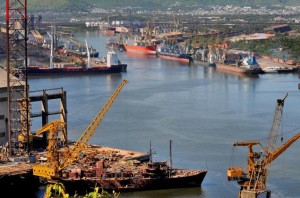 Within a region of several ports, it is usually noticed that a particular port is said to be the Main Port. This is so because the term ‘main’ is often used in relation to total cargo throughput volume. In this context, Main Port means usually the largest in volume, busiest and therefore the most important port. However, it is not always the trade of cargo or other goods which puts a port in the class of Main Ports. Sometimes a port is recognized as a Main Port because of its importance to the hinterland rather than the trade volume.

Minor ports are usually those ports which have a lesser trade volume or work to assist that of the Major Ports. They are administered from lower governmental levels, i.e. from state level, like in India. It provides more flexibility in the administration. But, they cannot be perceived to be of any lesser economic importance.[2]

In India basically the terms Minor and Major reflect the level at which they are governed. In case of a Main Port which is being assisted by several other ports it can be termed as ‘Hub Port’. Hub port is a huge port to which many shipping lines direct their cargo from a remote port. The remote ports which are assisting are usually said to feed the Hub Port and hence, termed as ‘Feeder ports’.

Trade plays a key role in an interconnected world and makes up a large part of the global economy. In terms of total volume of trade done through the ports, it can undoubtedly be termed as trade amplifiers.

The primary functions undertaken by the port are said to be the core functions. These can be said to be the object with which the port has been established. E.g., transportation of passengers and cargo, development and maintenance of port superstructure, towage, mooring, etc.

They are more distant than that of the supportive functions. These functions do not directly support the core business. E.g. empty container for storage and supply, hinterland operations like forwarding services, etc.

Different ports provide different functions, and especially bigger ports provide a lot more offerings. It is important for that of a terminal operator to create additional offerings in the form of supportive and complimentary functions to boost its economic interest. 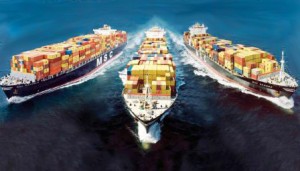 Port performance and port economics are closely related with macroeconomics, hence, any changes in port traffic or operation has an impact on national economy. As by means of water-carriage, a more extensive market is opened to every sort of industry than what land-carriage alone can afford it, so it is upon the sea-coast, and along the banks of navigable rivers, that industry of every kind naturally begins to subdivide and improve itself.[3]

From the past three decades it has been observed that the port oriented industries are relocating closer to ports for economic viability. The service providers in the port areas also induce the industries to relocate in search of better value for money. Service providers of a port are those that provide services to the users of the port, i.e., to carriers, shippers, and passengers. The primary service provider of a port is the port operator. Other service providers include, for example, stevedores, ship agents, customs brokers, pilot and towage companies, and various government agencies providing maintenance of harbor channels, customs, and vessel traffic service systems.[4]

In face of the global financial crisis and the economic downturn, infrastructure sector plays an important role to counter balance against slowing economic activity and lower consumption. In India, it has been seen that ports and logistics is the third most attractive sector of investment after power, roads and highways.

The economic history of maritime powers such as England, Spain and Portugal clearly documents the significant and critical role which ports have played in the development of the global economy and have exponentially promoted international trade. Port development not only accelerates the rate of international trade but also acts as a catalyst to employment and revenue effects. The beehive of activities in seaports all over the world clearly shows that ports have significant economic impact regionally, nationally as well as internationally.

More than 90% of world merchandise trade is carried by sea and over 50% of that volume is containerized. In today‘s era of globalization, international trade has evolved to the level where almost no nation can be self-sufficient and global trade has fostered an interdependency and inter-connectivity between countries. Shipping has always provided the most cost-effective means of transportation over long distances and containerization has played a crucial role in world maritime transport.[5]

International trade is always interconnected with that of the transportation and port logistics is synonymous to the bulk and cheap transportation facilities. Thus, it can be safely concluded that if port efficiencies are taken care of by that of the nations, then it could lead to a booming economy.