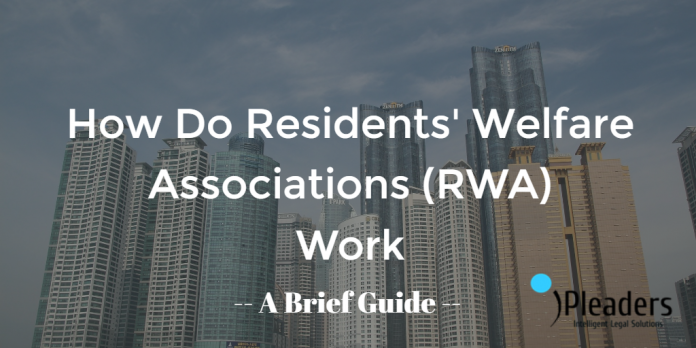 This article is written by Anubhav Pandey who talks in detail about how Resident Welfare Associations (RWAs) work, especially in Delhi & several other cities.

In this chapter, you will learn about-

How Many People are Required to Form a Resident Welfare Association

Seven or more persons can subscribe their names to a Memorandum of Association and can file it with the Registrar of Societies to form themselves into a Society under the Societies Registration Act, 1860.

Are there any Guidelines Issued by the Government to RWAs? Are they Binding?

The government has framed specimen MOA rules and regulations for Resident Welfare Associations (as attached). The government may also issue guidelines to these RWAs as it is seen in Bhagidari Scheme in Delhi, which was to promote broad-based civic participation in local governance.

Has the Court Said Something about Resident Welfare Associations?

The Society may sue or be sued in the name of the President/General Secretary as per the provision laid down under Section 6 of the Societies Registration Act, 1860, as applicable to the National Capital Territory of Delhi. Courts have often taken cognizance on the working of the RWAs.

(With excerpts from Specimen Rules)

While you may refer to the specimen MOA and rules and regulations, a brief explanation of the governance structure of Resident Welfare Associations is being provided here.

Membership of RWA – The membership of the society is open to any person who has attained the age of majority and has interest in the development of the society and abides by terms and conditions of the society without any discrimination of the religion, caste, creed or colors but subject to the approval of the governing body. This includes tenants too.

A person is not a member just by the virtue of him residing in a particular locality. Proper registration is required in a prescribed form.

Refusal of Membership – The governing body of the society might refuse any person for the membership provided. Reasons for refusal is to be communicated to the person concerned in writing with reason.

Quorum and Notice of Meeting – A general body of the society consisting of all the members is to be constituted.

Governing Body –  Resident Welfare Association should have a governing body of the society to look after and to manage the day to day affairs of the society.

Power and Duties of Office Bearers

Filing of list of office bearers with the Registrar of Societies, Delhi

Once in the month of April every year, a list of the office-bearers and members of the governing body of the society is to be filed with the Registrar of Societies, Delhi, as required under section 4 of the Societies Registration Act, 1860.

List of Typical Functions of a Resident Welfare Association

Resident Welfare Associations have played a major role in improving Delhi in the past decade and I hope they keep up with the pace in the forthcoming decades too.

What do you think about the working of Resident Welfare Associations in your locality or nearby? Comment Below. And don’t forget to Share.