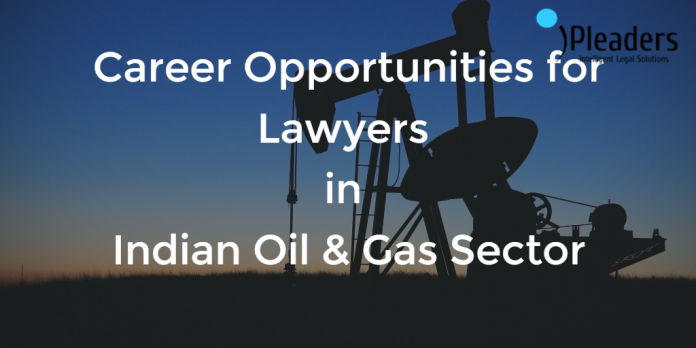 In this blog post, Alisha Vernekar, a student pursuing a Diploma in Entrepreneurship Administration and Business Laws from NUJS, Kolkata, describes the career opportunities in India for lawyers in the oil and gas sector.

In order to study the opportunities that a lawyer in India would have in the sector, one has to assess and evaluate global market trends, market trends prevalent in India, incentives and regulations introduced by the Government and several more germane parameters.

Meaning of Oil and Gas Industry

Petroleum is a naturally occurring yellow-to-black liquid found in geological/rock formations beneath the Earth’s surface. It is then commonly refined into various types of fuels such as petrol, gasoline, kerosene, asphalt, natural gas and chemical regents necessary for the manufacture of plastic and pharmaceutical products.

The oil and gas industry is typically divided into three major sectors which are enumerated herein:

History of the Oil and Gas Industry in India

In the 18th century during the Industrial revolution, oil deposits were first discovered in Assam near a small town called Digboi and during the World War II the oil fields were producing a considerable amount of oil.[1]

After India won independence in 1947, the new government moved to a Communist system which in terms of economic policy meant a larger role for the government.[2]

At that juncture, the Government played a vital role in the industry, be it by establishing Government owned companies or regulating the price of oil.

In 1977, the Oil Pricing Committee (OPC) set up by the government had devised a pricing mechanism for petroleum called the Administered Pricing Mechanism (APM), which inadvertently ultimately rendered the manufacture of petroleum products commercially unviable.[6]

The process of economic liberalization in India began in 1991 when India faced near crisis situation and defaulted on repayment of her loans and asked for a bailout from the IMF.[7] The bailout was done on the condition that the government initiates further reforms, thus paving the way for India’s emergence as a free market economy. For ONGC this meant being reorganized into a public limited company (it is now called Oil and Natural Gas Corporation).

In 1997, the Government announced the deregulation of the oil & gas sector and the dismantling of the APM in a phased manner over a five-year period. After the new Industrial Policy of 1991, the government for the first time opened this industry for private participation.

The decision to move from a controlled industry to a market driven petroleum sector was the most important decision which finally resulted in the Government completely phasing out the APM on April 1, 2002, when it relinquished control over kerosene and gasoline prices.

With India progressively liberalizing its economy and with the deregulation policy announced in 1997, the oil & gas sector became an interesting prospect for several private sectors and foreign players.This system continued till mid-2004 when it was effectively abandoned, with the Central Government once again centrally controlling upward price revisions. [8]

The Ministry of Petroleum & Natural Gas (Petroleum Ministry) of the Government of India now regulates this Industry. The Petroleum Ministry is responsible for exploration, excavation, supply, distribution, marketing and pricing of petroleum including natural gas and petroleum products, setting up of oil refineries including lube plants, regulation of additives for petroleum and petroleum products, lube blending and greases, planning, development and regulation of oilfield services etc and also for the monitoring of the various entities to ensure that they conform to the applicable laws.

These statutes and rules lay down the substantive and procedural requirements to be complied with in order for a party to engage in E&P, refining, import and distribution activities relating to petroleum products. In addition, the Petroleum Ministry, from time to time, announces various notifications and regulations which govern the procedural and policy norms for the sector[10].

Also Read: End of an Era:What did we actually achieve?

It is quite evident that the industry is going through a transformative period in its history. The reason for this transformation lies in the depleting resources and the unfortunate impact the industry has on the environmental we live in.

The sensational drop in oil prices — below the US $40 per barrel at the end of 2015, down more than 60 percent from their high in the summer of 2014 — reflects rampant supply and weak global demand amid concerns over slowing economic growth around the world, especially in China.

This imbalance is only going to worsen this year. Saudi Arabia continues to pump at full tilt, less concerned about propping up oil prices and more intent on securing market share. They are hoping to drive out marginal producers, particularly in the United States.

As early as the second quarter of 2016, the flow of Iranian oil is likely to increase, adding to the glut. Even Middle East instability, such as the tension that erupted between Russia and Turkey in Syria towards the end of 2015, has not budged crude prices. Consequently, we expect oil prices to remain low for the near future, although it would not surprise us if volatility returns[11].

Surprisingly Crude oil prices have risen to $49.85 a barrel today, being as much as 7.5 percent rise since  the biggest gain since February due to the growing optimism of the meeting to be held in Vienna by the Organization of the Petroleum Exporting Countries(OPEC) who is speculated to deliver a production cut deal later in the day. The OPEC deal would be aimed at cutting into a global oversupply of oil that has severely depressed prices since 2014 [12].  This may bring some good news as there have been jobs cuts in the oil industry in the past 2 years till date due to low prices [13].

For now, nothing remains certain in the industry except that the industry shall ultimately surface with a different avatar from the one we know now.

Scenario in India Today and the Way Forward

Despite being a net importer of crude oil, India has become a net exporter of petroleum products by investing in refineries designed for export, particularly in Gujarat. The initiative promotes Investment opportunities in upstream, gas pipeline, City Gas Distribution (CGD) network, LNG Terminal, Petrochemical and Refineries.[16]

FDIs in Oil and Gas Sector of India

However, FDI up to 49% through the automatic route is permissible for Petroleum refining by PSU, without disinvestment or dilution of domestic equity in existing PSUs.

Future Growth and Demand of Oil and Gas in India

“India’s oil demand is expected to grow at a CAGR of 3.6 percent to 458 Million Tonnes of Oil Equivalent (MTOE) by 2040, while demand for energy will more than double by 2040 as economy will grow to more than five times its current size”.

– Stated by Mr. Dharmendra Pradhan, Minister of State for Petroleum and Natural Gas[18].

Lawyers and law firms are constantly looking for different areas representing new avenues or markets, the aim being to establish an advantageous position before the competition catches up.

Quite obviously, the new niche practice areas’ call for a different mindset and unique skills set. With the introduction of the new incentives introduced by the Indian government and petroleum, being a big business and an inextricable part of relationships between nations and governments, the industry offers diverse opportunities for lawyers and other professionals.

Cross-border activities in this industry require comprehensive due diligence, tough negotiation, multi-jurisdictional execution etc. All this is invariably done by legal professionals and advisers drawn from different jurisdictions, sometimes, with the different set of laws.

Another important area of work for legal professionals in this sector is the dispute resolution through mediation/conciliation/arbitration and in courts. Thus, it is only natural that the demand for specialized legal professionals who appreciate the functional aspects of the business is acutely felt by the companies. This has created fresh opportunities for lawyers in India and abroad in the private sector as well as the public sector.[20]

Hence, it is certain that lawyers have a very bright future in the industry and their demand is only going to increase in the near future.

What are your thoughts on this emerging sector? Do you think this industry can become a top attraction for the aspirants? Comment Below and don’t forget to Share.

Opportunities for India in Current Downtrend of Oil Prices

What career opportunities open up if you do LLM from a top university : how does the CLAT PG exam help you get into...