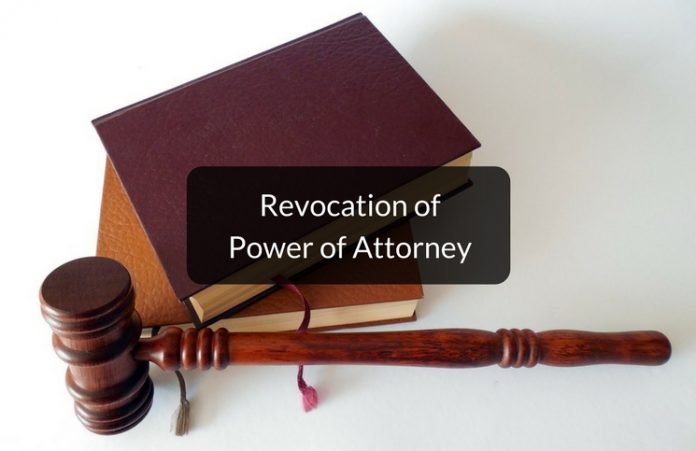 Introduction: What is a Power of Attorney

A Power of Attorney may be:

It is important to know the procedures and legalities involved in revocation once Power of Attorney is granted to an agent, to avoid any misuse of power.

Kinds of Power of Attorney: A Perspective on Revocation

A power of attorney, depending upon the clauses of the deed executed, may be –

Generally, the principal has the right to terminate the Power of Attorney whenever he wills to do so. Some of the conditions for revocation are ( by virtue of Section 201 of the Indian Contract Act, 1872):

For revocation of irrevocable Power of Attorney, the principal is required to issue a public notice through local newspapers, without which, the revocation shall stand void.

However, in the following cases a principal cannot revoke a Power of Attorney:

“Where the agent has himself an interest in the property which forms the subject matter of the agency, the agency cannot, in the absence of an express contract, be terminated to the prejudice of such interest.”

To understand situations where Power of Attorney can be said to be coupled with interests, the following cases may be referred to:

The Supreme Court of India, in Seth Loon Karan Sethiya v. Ivan E. John[2] held that the agency cannot be revoked where such agency is created in exchange for some valuable consideration and the authority granted by the agency is to secure the interests of the agent or to effectuate the security against such consideration. Therefore,  in a case where the agent himself has an interest in the property, the agency can not be terminated unless there is an express contract for such termination, to the prejudice of the agency holder.

In another case, Vishnucharya v. Ramachandra[3], the agent used to get his salary out the rent collected by him on behalf of the principal. The agency which authorized the agent to collect rent was held to be ‘not coupled’ with interest. Therefore, where the agency merely grants some remuneration or commission, it cannot be held to be an agency coupled with interest.

Some of the important things to know about the revocation of a Power of Attorney are:

In an express revocation of Power of Attorney, whoever, whether the principal or the agent requires to end the Power of Attorney, must give reasonable notice to the other party before the revocation. Upon failure to do so, all the costs of damages caused on account of such failure, incurred by the other party to whom such notice was owed, shall be made good by the party who failed to fulfill his obligation to give such notice. Reasonability of the notice differs from case to case, depending upon the clauses of the deed.

An implied revocation does not require a prior notice.

A Power of Attorney may be registered or unregistered. The procedure for revocation of both of them are different, as discussed below:

A registered Power of Attorney can only be revoked by means of a registered deed.

An unregistered Power of Attorney can only be revoked by an unregistered instrument of revocation. Apart from that it is required to issue a public notice regarding such revocation through local newspapers, without which, the revocation shall stand void

If a firm gives Power of Attorney to an agent, such power of attorney gets revoked automatically upon dissolution of the firm.

Misuse of Power of Attorney by the Agent

Therefore, a principal since cannot be held to liable for fraud/misrepresentation by the agent if it is outside the limits of the authority provided by the Power of Attorney, he may not need to revoke it.

The Power of Attorney may be revoked if it is revocable upon such misconduct by the agent.

In case where the agency is irrevocable owing to the interest of the agent in the subject matter, and he commits an act unfavorable to you, there needs to be a separate agreement/contract between the principal and the agent as per Section 202 of the Indian Contract Act regarding termination of agency upon commission or continuation of such act to enable the principal to terminate such agency, otherwise, the Power of Attorney remains irrevocable.

However, if the acts done by the agent are not in good faith and are not lawful, the principal is not liable to indemnify him. In fact, if the acts of the agent are criminal, and the principal has agreed to indemnify him, such indemnification is not valid.[5] It is advisable to issue a public notice warning the  misuse of the POA by the agent to commit unlawful acts in at least two local newspapers, and to approach the court of law to terminate the agency, even if it happens to be irrevocable.

As much important the concept of Power of Attorney is to facilitate the principal to carry on his work even without actually being present at the place where such work is to be done, so is the right of the principal to revoke it to avoid any harm to his interest by the agent. While in most of the cases revocation is possible, there are some exceptions to it. Before giving someone or accepting the power of attorney, the principal/agent should be aware of these conditions.