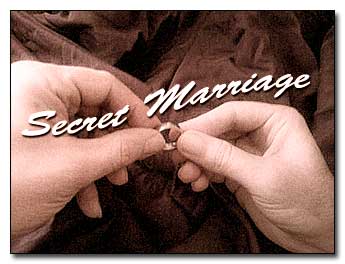 Ever thought of marrying in secret and keeping it a secret as well? Is it even possible as per the Indian matrimonial laws to get married in secret while keeping the marriage a secret? The following article by Anubhav Pandey will answer all your queries on secret marriage.

What does secret marriage means

Procedure of marriage under the Special Marriage Act, 1954

These are the checkpoints at which a problem might arise when any couple is intending to keep their marriage a secret.

Section 5 of the Special Marriage Act, 1954 mentions, “Notice of intended marriage.” The section clearly specifies that the parties to the marriage are obliged to give a notice of their marriage in prescribed format to the Marriage Officer of the district. This hindrance might expose the secret marriage.

Hindrance number 2 (Anyone can access the details of the marriage)

Section 6 of the Special Marriage Act, 1954 mentions, “Publication of the notice of the marriage.” Therefore, a true copy of the notice of the marriage will be kept with the Marriage Officer and furthermore, such book shall be open for inspection at all reasonable times, without fee, by any person desirous of inspecting the same. The second hindrance also has the chances to exposes the secret marriage.

Hindrance number 3 (Publication of the notice of marriage)

Henceforth, if you are thinking of getting married at a place other than your permanent address, the notice of your marriage will be in some way or the other reach to your place of permanent residence.

Hindrance number 4 (The toughest one)

Apart from putting up of a notice at the court’s premises, a general practice is that a notice is sent to the residential addresses of both parties to the marriage through the Station House Officer (S.H.O.) of the police station of concerned jurisdiction for the purpose of verification of address.

No need to inform the parents about the court marriage

The proposition of Special Marriage Act, 1954 and issuance of the notice to the respective residence has been properly dealt in the Delhi High Court judgment delivered by, Justice S. Ravindra Bhat in Pranav Kumar Mishra and Anrs. V. Govt of NCT of Delhi and Anrs. The High Court in paragraph 8 of the judgment held the following.

“It becomes clear on a textual reading of the relevant provisions of the Act that no requirement of posting of the notice to applicants addresses or service through the SHO or visit by him is prescribed in the Act. Absent any legal compulsion – as is the position -for sending notices to residential addresses in case of solemnization of the marriage, in terms of Sections 4 and 5, their dispatch can well amount to the breach of the right to privacy, which every individual is entitled to.”

Customary marriages. Can it be kept a secret

It is of utmost importance to talk about customary marriages and whether these marriages can be kept a secret or not? Let us look at this perspective of secret marriage.

Answering this query, two major proposition will be dealt within this section.

First, whether it is possible to get married under Hindu customary law while keeping it a secret?

Second, Arya Samaj marriage. Is it possible to keep a marriage solemnized under Arya Samaj ritual a secret?

To explain as well as to understand the above proposition, it is pertinent to take a note at this juncture the ceremonial intricacies of marriage under the Hindu rituals.

Any Hindu Marriage must either be performed with the shastric ceremonies and rites or in accordance with the customary rites and ceremonies.

The question is, out of various ceremonies performed in a Hindu marriage, which is the most essential ceremony without which the marriage would be rendered void?

The answer to the above question is not simple. The judicial pronouncements do not clearly lay down which of the ceremonies are essential for the valid performance of a Hindu marriage. However, there need not be any doubt about one ceremony, viz., the saptpadi which is absolutely indispensable for the performance of a Hindu marriage by the shastric rites. [Devani v. Chindavaram, AIR 1954 Mad 65]

Further, sub-section 2 of Section 7, Hindu Marriage Act lays down, “Where such rites and ceremonies include the saptpadi … the marriage becomes complete and binding when the seventh step is taken.”

This is not a settled proposition and various judicial pronouncement, as well as jurist opinion, differs on this proposition. The sole conclusion which can be drawn from the available opinion is, the validity of the marriage is entirely dependent on the customary rituals undergone through. An essential custom in a Hindu marriage is the saptpadi. The validity of a marriage depends on whether saptpadi took place between the bride and the groom or not. Saptpadi is sufficient proof to call it a marriage. What is required is photographs of the ceremony. All the rituals especially the saptpadi must be undergone through for the marriage to be called a valid marriage under the Hindu Marriage Act.

The most noteworthy point is, the marriage should not be a “Filmy Marriage”, that is, it should not be a mockery of the ritual. This will be further dealt in the later section of the article.

If any couple is intending to keep their marriage a secret, the easy solution available is a marriage under the Arya Samaj rituals.

The ceremony of Arya Samaj marriage is conducted as per the Vedic ritual of Arya Samaj, and its validity is derived from Arya Samaj Marriage Validation Act, 1937 with provisions of Hindu Marriage Act, 1955.

Who are eligible for an Arya Samaj marriage?

The only hindrance in an Arya Samaj marriage is an availability of a witness. Ask any of your friends out to help for the following. Also, marriage certificate under the Arya Samaj marriage is given by the Mandir authority itself. But after the decision of the Hon’ble Supreme Court in 2006, it is important to get your marriage registered with the Registrar of the court.

Repercussions of getting married in secret

While taking the admission of the kids in the school, nowadays, parents of the kids are often interviewed along with the children. Along with the interview, various documents are required and marriage certificate might be one of them.

Difficulty in getting passport

Getting hold of a passport in a massive task. Procedural formalities, paperwork, and most importantly, passing the police verification step. It is a procedure generality that, verification will be done by the police authority to cross check the details filled by the applicants. Therefore, if you are keeping your marriage a secret, a problem might arise during the verification process of the passport.

In a majority of the cases relating to secret marriage, either the marriage is a polygamous marriage or the marriage is done just to get the sexual pleasure. Hence, these are the repercussions which might arise while a couple is seeking to keep their marriage a secret.

Desertion of wife after the secret marriage. Is the deserted wife eligible for maintenance

The Hon’ble Apex Court in Bodhisattwa Gautam v. Subhra Chakraborty [1996 1 SCC 490] held that Rape after deceiving a woman in the name of marriage is thus not only a crime against the person of a woman (victim), it is a crime against the entire society. It destroys the entire psychology of a woman and pushes her into deep emotional crisis. It is only by her sheer willpower that she rehabilitates herself in the society which, looks down upon her in derision and contempt.

In the following case, a secret marriage took place between a teacher and a student. Later, when the wife became pregnant, the husband deserted her. The Hon’ble court held that the husband is liable to pay a compensation of INR 1000 to the deserted wife.

Filmy marriage. Can ek chutki sindoor and mangal sutra in front of a god solely make any marriage valid?

It is often found that couples after putting up of Vermillion and mangalsutra consider themselves married. This is wrong and void marriage. This proposition is dealt in a recent judgment of Bombay High Court, Nagpur Bench. FAMILY COURT APPEAL NO.57/2015 Shri Nitin V Smt Rekha

In the following case, the lady contended that she was married to the appellant on 16.4.2012 by putting a Mangalsutra and applying vermillion on the parting of hair, before the idol of Lord Krishna. The court held that such filmy marriages cannot be considered to be a valid marriage. Also, where a marriage is alleged to have been performed in accordance with any modified form of Shastric Hindu Law, it must be pleaded and proven as a custom. In the absence of a plea as to the custom, no amount of evidence can be looked into.

Just as no one is free to innovate ceremonies, similarly no one is free to perform any ceremonies of marriage, even though the intention to be man and wife may be there. Where in a case, the marriage ceremony was performed in a moonlit night in the open where Dr. Mukerji after reciting a few Sanskrit verses embraced Smt. Harbans Kaur and exclaimed, “Moon you are my witness. The Madras High Court held the marriage to be void. [Dr. A.N Mukerji v. State, AIR 1969 All 489]