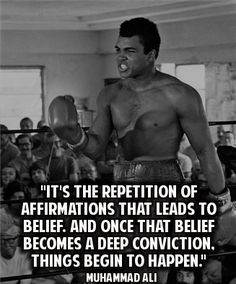 In a pre-bout press interview, Ali was asked how he expects to perform against Foreman. What Ali said continues to inspire all sorts of people till date – sportsmen, CEOs and underdogs everywhere in the world. Here is a link to that video:

There is something striking about the ridiculous things Ali says about himself, capping everything with a proclamation of “I will show you how great I am!”

He offers some real life evidence of why he might out perform Foreman for a while, like his previous wins, but then he soon switches to unreal claims about how mean, fast and strong he is. If you watch it carefully, you may realise that Ali is not just telling that to the people in the room, but to the universe and to himself. He is creating, through his words, a world where he can wrestle with an alligator and tussle with a whale, and his competition is lighting, thunder and electricity when it comes to speed.

That is the world in which Muhammad Ali lived. That’s where he trained, that’s where he fought, that’s where he made his life’s unorthodox choices.  That is why, many of his actions and speeches make little sense to the ordinary people who have no experience of living in a world like that.

In his world, it was unquestionable that he was the greatest boxer of all time.

Foreman, who was shocked and enraged by the defeat, will later on become a friend and great admirer:

“I figured that if I said it enough, I would convince the world that I really was the greatest.” – Muhammad Ali

This world that Ali lived in, was created through his imagination, and powerfully articulated in words by him again and again. Before it happened, Ali was already living it.

It is not only Ali.

Another icon who used the power of self-affirmation and visualisation was Arnold Schwarzenegger. He had a vision of himself as a person with a body like Reg Parks, his bodybuilding hero. He constantly affirmed this self image, and he says he only worked hard to fit that mental model.

It’s not only physical activities in which self-affirmation helps. Frank Sinatra, the iconic musician, till ripe old age would keep saying that “the best is yet to come”. However, the most inspiring story is that of Jim Carrey. In the early 90s, he was a struggling actor, facing serious financial difficulties. He wrote himself a cheque of USD 10 million, and kept carrying it in his wallet for inspiration, till it became true.

Self affirmation is very powerful, and a google search will reveal to you a long list of celebrities who swear by self-affirmation.

What conversation do you entertain about yourself? Is it that you are great? That your future is bright, amazing, and that your days are exciting?

No one is perfect, and everyone has bad days and go through bad times. However, what you say to yourself about yourself is critical to who you become and what you make of your life.

Create some affirmations that work for yourself. Want to be a great lawyer?  Here is some inspiration: