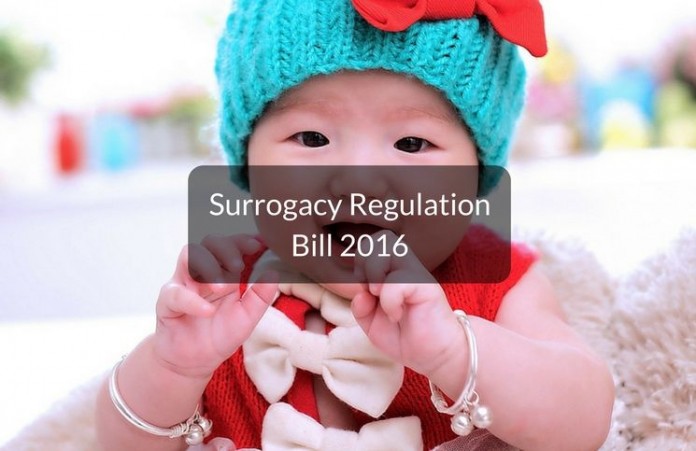 The Surrogacy regulation bill 2016 basically defines Surrogacy as a practice of a woman giving birth to the child, for an eligible couple, and agrees to hand over the child after the birth of the child.

With the aim of putting an end to the exploitation of poor women who agrees to become surrogate mothers for money, the Union Cabinet recently cleared the Surrogacy Regulation Bill, 2016. It permits moral surrogacy to the wedded barren couples.

The surrogacy charge intends to restrict potential abuse of surrogate moms and youngsters conceived through surrogacy.

According to the Surrogacy Regulation bill 2016, only Indian couples who have been married for at least five years can opt for surrogacy provided that one of them have been demonstrated to have fertility related issues.

Just close relatives, not really related by blood, will have the capacity to offer benevolent surrogacy to the qualified couples.

Surrogacy centers will be permitted to charge for the administrations rendered over the span of surrogacy however, the surrogate mother can’t be paid.

Eligibility Of A Surrogate Mother

It expresses that any kid conceived out of a surrogacy method will be dealt with as the organic offspring of the planning couple and is qualified for all the privileges and the liabilities that are of the common type.

There is additionally a procedure for charging a surrogacy-

These validations will be yielded by an organization control if the couple and the surrogate mother fulfill each one of the conditions determined already.

Why To Ban Commercial Surrogacy?

Commercial Surrogacy is basically governed and is issued by the Indian Council for Medical Research. They are not enforced and the clinics are not legally bound to follow them. In a business surrogacy course of action, the surrogate mother is paid to convey the type- amid the term of the pregnancy.

In commercial surrogacy, the surrogate mother is not compensated.

India is presumably one of the last nations needing to boycott commercial surrogacy.

The Surrogacy Bill, 2016 is to ensure the enthusiasm of the poor ladies who approach to go about as surrogate moms. The subject of poor ladies being abused by the rich has been raised at whatever point the theme of surrogacy is talked about.

The Surrogacy Regulation bill 2016 accommodates selfless surrogacy wherein close relatives of the fruitless couple could go about as surrogate moms and help them to have a kid. Benevolent surrogacy is permitted in many nations yet has not ended up being an extremely effective model.

In India, when a specialist guide a barren couple for surrogacy, altruistic surrogacy is the main choice that is displayed to them. Yet, in actuality, relatively few can pick it.

The motivation behind why charitable surrogacy has never been fruitful is that the barren couples are subject to the sensitivity of a relative who can help them.

It is not an exchange of equivalents.

In affectionate families, for example, in India, the prospect of having the lady who conveyed the youngster all through the kid’s life, brings passionate difficulties inside the family and all the more essentially, for the tyke.

Be that as it may, can the torments of the rich and the moderate be a decent purpose to abuse a poor lady?

Surrogacy has been an unregulated field and there is monstrous extension for misuse of poor ladies going about as surrogate moms. What’s more?

That is the single significant reason that required the control of the exchange.

The proposed guardians and surrogate moms anticipated that the legislature would think of the correct stage for the surrogacy course of action so they can work without degree for abuse.

A stage where the dangers of things turning out badly could be decreased and where go between can’t deceptively benefit from the surrogacy course of action.Be that as it may, the cure introduced by the administration is to boycott business surrogacy and to permit just charitable surrogacy.

Controlling Commercial surrogacy is intense however, the aim is of sensible clarification to boycott an exceptionally effective, attempted and time-tried model, to help childless couples and poor surrogate moms in the meantime.

It considers it a “rent a womb” industry.

In Landscape where there is extreme poverty, not just nationally but globally also, Surrogacy is a slippery slope because a woman is renting her womb.

It is a completely an unregulated environment.

This is just to protect the surrogate because suppose if the couple or the clinic violates the law, the surrogate is not able to enforce it.

Secondly, there is no testing if one of the parent is HIV positive to protect the mother.

Thirdly, what about the psychological impact upon a women womb as suddenly the child is picked up?

This is done basically to not take the narcissism of an individual who cannot have a child by himself.

Being infertile doesn’t make any women less of a women. There is always an option to adopt a child and give him the same love and care. Surrogacy is Anti – women, it is Anti-Women to those who are infertile, anti to the women who become surrogate and it is simply an institution facilitated by capitalism.

However, I totally condemn upon the condition in the bill which makes it illegal for homosexual people, for single parents and to foreigners to make use of medial facilities for altruistic surrogacy in India.

It shows that they are pushing a cultural agenda which is against our constitution.

This’s all about Surrogacy Regulation Bill 2016 for now. Did you find this post useful?  Let us know in the comments section. We’ll update.