This article has been written by Shreya Kalantri, pursuing the Diploma in M&A, Institutional Finance and Investment Laws (PE and VC transactions) from LawSikho.

A takeover occurs when one company makes a successful bid to assume control of or acquire another. Takeovers can be done by purchasing a majority stake in the target firm. Takeovers are also commonly done through the merger and acquisition process. The purchaser of the company is known as the ‘acquirer’ and the company being purchased is known as the ‘target company’.

A takeover usually occurs when one company makes a bid to take control of or acquire another, often by buying a majority stake in the target company. The company making the bid is called acquirer in the acquisition process. In contrast, the company that it wishes to take ownership of is called the aim.

Difference between Acquisition and Takeover

ACQUISITION- When one company acquires another company with the permission of its board of directors to do so then it is called acquisition. This happens due to various reasons like increasing the market value of the company’s share, providing financial or technical help to the company, etc.

TAKEOVER- When one company acquires another company without the permission of its board of directors then it is called takeover. Takeovers are generally performed by large companies to either remove competition or to expand.

The target company may be a listed or unlisted company. Listed companies are those which are incorporated and exchanged on a particular stock exchange. An unlisted public company is one which is not listed on any stock exchange however can have a limitless number of investors to raise capital for any business adventure.

How is takeover governed for an unlisted company?

Let us understand the process of acquiring an unlisted company through an imaginary example of two companies P Limited and R Limited.

Now, let us try to understand the regulatory and substantive bottlenecks that P limited will encounter while taking over R  Limited. For instance, for acquiring R Limited, P limited has to make an investment taking into consideration Section 186 of the Companies Act, 2013.

What does Section 186 of Companies Act provide?

Section 186 provides that if a company wants to make an investment in an another company then there are two limits that it needs to follow while investing:

What if the company is investing less than this threshold limit?

In that case, it can make such an investment just bypassing the board resolution.

What if the company is investing more than the threshold limit?

In this case, they will have to do this through a special resolution in the general meetings of the shareholders.

In our example, Once P Limited has 75% of the company’s shares he is eligible to acquire the entire shareholding, i.e; 100% shares of R Limited.

Let us try to understand how the acquiring of remaining shares will be done in our case.

An acquirer owning at least 75% of shareholders can make an offer to the minority through NCLT for acquiring these shares.

Among few provisions of the Companies Act, 2013 yet to be notified were subsections (11) and (12) of section 230. The broader section deals with schemes of arrangement and compromise. These two subsections have come into effect from 3 February 2020.

In order to operationalize these provisions, MCA has also notified rule 3(5) of Companies ( compromises, arrangements and amalgamations) Rules 2016. This rule provides that any shareholder along with others holding at least 3/4th of shares in the company can initiate an arrangement for acquiring the shares of the remaining shareholders of the company.

The offer of acquisition has to be for the remaining portion of shares not held by the potential acquirer (X Ltd). A scheme of arrangement needs to be drafted for the said takeover and an application has to be filed with the National Company Law Tribunal.

This application needs to be submitted with important records including the valuation report given by the registered valuer, most exorbitant cost paid for the portions of the Target Company (Y Ltd) by any individual in the previous year and consideration of the possible pricing parameters (PPP) for arriving at the fair value of the shares. The application will likewise contain the details of the bank account wherein at-least 50% of the total consideration is deposited.

1) Filing of application with NCLT;

3) Approval of the scheme by members holding three-fourth in value of the total value of creditors and members;

4) Sending out the copy of the application to the applicable regulatory authorities like the Registrar of Companies, Regional Director, IT Authorities, etc; and

5) Filing an application with NCLT for approval of the scheme of arrangement.

When the application is endorsed, the active investors should take their imperative portion of consideration and transfer their shareholding in the name of the applicant potential acquirer (X Ltd). 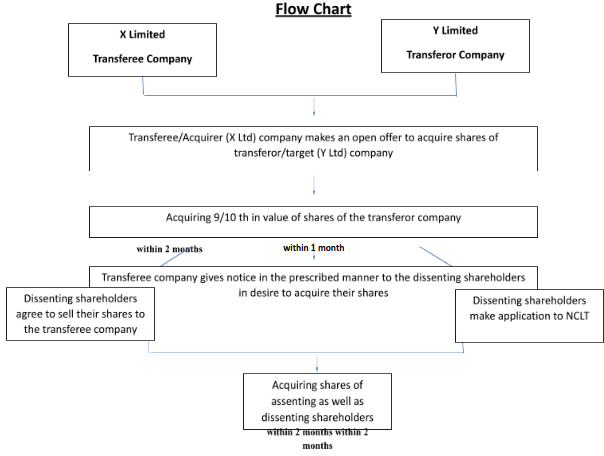 If the transferee company along with the person acting in concert (PAC) holds 90% or more shares in the target company then they can offer to buy their shares at a value determined by registered valuer to the remaining shareholders. The transferee company has to keep the money in a separate bank account and pay within 60 days. Consideration has to be paid only when the offer for acquisition has been and the time for delivery of share certificates by the minority has expired. NCLT is not involved at any stage under section 236 of Companies Act. This provision also provides an option to the minority shareholders of a company to offer their shares to the majority, thereby assisting them in exercising their exit rights.

Section 230(11) of Companies Act, 2013 deals with takeover of an unlisted company through an arrangement, Section 235 of Companies Act, 2013 deals with Corporate acquired with majority approval and Section 236 of Companies Act, 2013 deals with takeover through minority squeeze out by the majority shareholders. As studied about the various sections and provisions made or takeover of an unlisted company it’s evident that each of these sections has its own importance. They may seem to have identical provisions but it differs when one looks deep into the language of the same. The only similarity in these provisions is the intent of takeover through an arrangement with the members and paying them a fair price for entering into the same. This not only protects the rights of the investors but also the shareholders and provides transparent and straightforward lawful structure to encourage takeover of unlisted companies.

LawSikho has created a telegram group for exchanging legal knowledge, referrals and various opportunities. You can click on this link and join:
https://t.me/joinchat/J_0YrBa4IBSHdpuTfQO_sA

How is blockchain and smart contract transforming the real estate industry

Difference between shrink-wrap and click-wrap agreement

Essential clauses in a shrink-wrap agreement