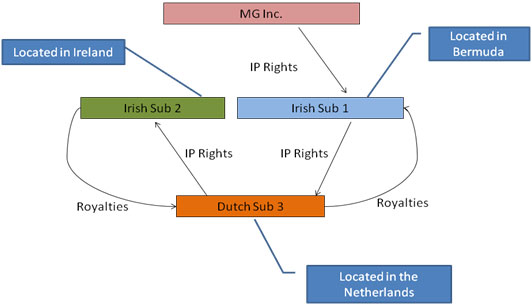 According to Bloomberg Businessweek, Google has saved $3.1 billion since 2007 and boosted last year’s overall earnings by 26 percent. According to company disclosures, Apple, Oracle, Microsoft and IBM—which together with Google make up the top five technology companies by market capitalization—reported tax rates between 4.5 percent and 25.8 percent on their overseas earnings from 2007 to 2009.

The million dollar question is HOW?

It involves a tax avoidance strategy. These strategies might range from simple maneuvers to diabolically complex schemes of the shuttling back and forth of income earned overseas in order to reduce the tax burden of a company. And don’t be scandalised. These strategies are perfectly legal- exploiting the idiosyncrasies of national tax policies worldwide and milking loopholes in the law. Not necessarily ethical per se, but legal.

Coming back to the question at hand, Google and the Top 5 took the help of a few tax avoidance strategies to boost their earnings worldwide. One such ingenious scheme is the Double Irish with the additive Dutch Sandwich making for a sumptuous meal for the bigwigs in the USA. These path-breaking and delectable- sounding tax avoidance strategies are discussed below for the uninitiated.

1. First we have a US Parent Company (lets say Microgoapacle, MG for short)

2. MG transfers its Intellectual Property Rights (meaning patents over inventions made by them, trademark related rights, or copyright on software or code – it could be anything depending on the business) to a subsidiary (child) of MG in Ireland

If MG assigns the rights over its intellectual property in Italy to Irish Sub 1, which would mean that the subsidiary would have all the rights over the invention in Italy that MG enjoys in the US. Irish Sub 1, in return (at least on paper) would market the product in Italy and pay for it from the profits arising from its sale.

3. The Bermuda Triangle: Where money goes once, never to be found again 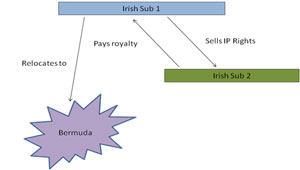 What can be the advantages with respect to tax-reduction by this relocation? Before we answer that question we need the help of another twist.

MG Inc. then sets up a second subsidiary namely IS 2 in the diagram above.  According to Irish provisions (explained in point 2 above), this means that even if it is assumed to be controlled and managed by the parent company, i.e., MG Inc., since it was incorporated in Ireland, it can opt to be governed by either Irish or American tax law. It chooses Irish.

IS 1 then sells the IP Rights given to it by MG Inc. to IS 2. So now IS 2 can commercially exploit the rights. In return, Irish Sub 2 pays Irish Sub 1 royalties for the intangible assets gained by it.

Now for the Dutch Sandwich… 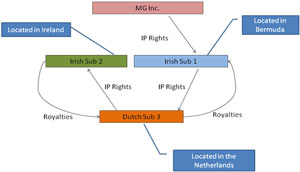 Now keep the Double Irish setup in your mind and make the following modifications:

Advantages of the Dutch detour