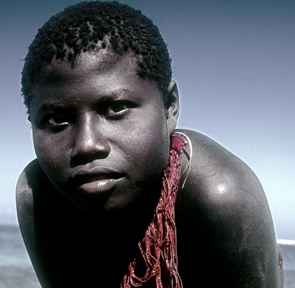 The Great Andaman Trunk Road or National Highway 223 connects Port Blair to Diglipur. Port Blair and Diglipur are situated at the south and north ends of the island and the road therefore covers a distance of 360 kilometre.

Somewhere in the middle of this road lies a forest area which has been home for the “Jarawa” tribe for thousands of years. The Jarawa people have been exploited and mistreated by the local authorities and the tourists since the last 2 or 3 decades. A lot of environmental groups working for the welfare of Jarawas filed cases in courts following which the Supreme Court in 2002 passed an order to shut down the Andaman Trunk Road. This order was however ignored by the local authorities and the Andaman trunk road was continually used for commercial and tourist purposes.

To protect the interests of the Jarawa people, a notification in October 2007 was issued by the Tribal welfare department of the Andaman and Nicobar. This notification demarcated an area of up to 5 km radius around the Jarawa Tribal Reserve as a buffer zone and prohibited entry into the buffer zone of anyone other than a member of the aboriginal tribe. This notification was quashed by the Calcutta High Court. The matter was then brought to the Supreme Court as a special leave petition [ LG, Andaman and Nicobar Islands & Ors. v. M/s. Bare Foot Inns & Leisure Pvt. Ltd]. The Supreme Court in its judgment dated 2nd July 2012 stayed the High Court’s order and held that no commercial and tourism related activities shall be carried out by the administration or any private individual in violation of the prohibition contained in the October 2007 notification. The Court asked the Andaman and Nicobar administration to strictly enforce the notification till it was considered by the court.

The Supreme Court then passed an interim order on 17th of January 2013, banning tourists from taking the Andaman Nicobar Trunk Road that passes through the area where the Jarawas live. The order also stated that only government officials, persons residing in the reserve and vehicles carrying essential commodities for the Jarawas would be allowed on the Trunk Road.

As a response to this interim order, an application was filed on behalf of local inhabitants which stated that the Andaman Trunk Road is a very vital road and connects more than 350 villages. It also stated that the Andaman Trunk Road is used to reach the only government hospital on the island and it is therefore extremely necessary that access to this road is granted to everyone. The application also stated that the Jarawas can be protected by other means like banning photography of Jarawas but the road should be open to everyone.

The Supreme Court therefore, on 5th of March 2013 reversed its interim order and thereby opening Andaman Trunk Road to the Tourists.

The Supreme Court’s order has once again raised fears of the tribe’s exploitation. Tourists travel along the Andaman Trunk Road in hope to see the Jarawa people and throw biscuits and other edible items on them and ask them to dance. The Jarawas are treated like animals in a zoo.

It is important to mention here that this issue no longer remains a national or local issue. The whole world came to know about the atrocities faced by the Jarawa people when an English  journalist brought up a video in which a semi-nude Jarawa women was being asked to dance for the tourists by a police officer and was offering food in return.  Organisation like Survival International have been working for the cause of the Jarawa people since years and making people aware of the atrocities faced by the Jarawa people. Even the United Nation is urging India to  protect the Jarawa people by closing the Andaman Trunk Road. The report by the UN Committee on the Elimination of Racial Discrimination says that:

‘India should protect tribes such as the Jarawa against encroachments on their lands and resources by settlers, poachers, private companies or other third parties and implement the 2002 order of the Indian Supreme Court to close the sections of the Andaman Trunk Road that run through the Jarawa reserve.’

It is hard to say whether the step taken by the Supreme Court is just or not. Considering the fact that the road is being used to reach a government hospital, a complete ban on the usage of road is definitely unjust. The Courts and the local authorities will now have to take some other steps and formulate laws that will protect the Jarawa people from being exploited and make sure that these laws are adhered to strictly.