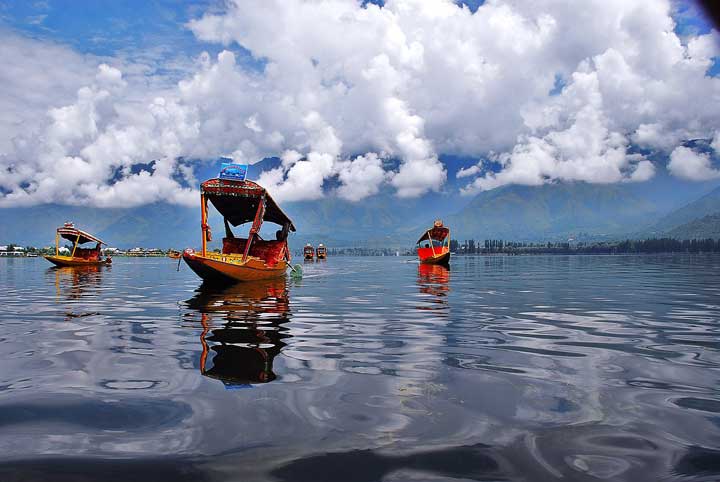 The State of Jammu and Kashmir has, all these years, remained in controversies and confusions, and hence in political turmoil. In the process the one who has suffered the most from ideological, social, political and economic perspective has been the common man of J&K. Among other things Article 370 of Indian Constitution has remained in focus for nearly six decades. Even in 2014, nearly 65 years after its formation, the position is no different.

The History & Genesis of Article 370:

When India and Pakistan gained their independence on 15 and 14 August 1947 respectively, Jammu & Kashmir (J&K) chose to remain independent. Maharaja Hari Singh (the then ruler of J&K) signed a standstill agreement with Pakistan. India refused to sign any such agreement. However, in October 1947, Muhammad Ali Jinnah sent Pakistani Muslim tribes to attack Maharaja and people of J&K. To save his state Maharaja chose to accede Jammu & Kashmir to India. It was in the pursuance of those commitments that Article 370 was incorporated in the Constitution of India. Kashmir was split with two-thirds going to India and a third going to Pakistan.

The genesis of the Article 370 is deeply connected with India’s independence and accession of J&K into India. Article 370, which is of a temporary nature, grants special autonomous status to J&K. Under Part XXI of the Constitution of India, which deals with “Temporary, Transitional and Special provisions”, the State of J&K has been accorded special status. Even though included in 1st Schedule as 15th state, all the provisions of the Constitution which are applicable to other states are not applicable to J&K. But not many people are aware as how and why this Article was formulated and included in the Indian Constitution.

The question that now arises is that why was this article inserted in the Constitution?

The answer to the question (as to why was it incorporated) was given by Gopalaswami Ayyangar, a former Diwan to Maharajah Hari Singh and the principal drafter of Article 370. He argued that for a variety of reasons Kashmir, unlike other princely states, was not yet ripe for integration. India had been at war with Pakistan over Jammu and Kashmir and while there was a ceasefire, the conditions were still “unusual and abnormal.” Part of the State’s territory was in the hands of “rebels and enemies.”
The Debate :

Even the present change of government has brought the issue in limelight. While country’s one of the largest political party, the Bharatiya Janata Party (BJP), has been demanding its abrogation on the ground that the state has got no benefit from it and on the contrary has fostered anti-national sentiment in the valley and sooner it goes better it would be for the state, its people and the country, a regional political party, the National Conference (NC), has been advocating its continuation on the ground that it is the bridge between this state and the Indian Union.

The article indicates that the Indian Government requires the concurrence of the State Government of Jammu and Kashmir for application of the prevailing laws or any new law excluding defense, foreign affairs, finance and communication.

Can Article 370 be revoked unilaterally?

Clause 3 of Article 370 is clear. The President may, by public notification, declare that this Article shall cease to be operative but only on the recommendation of the Constituent Assembly of the State. In other words, Article 370 can be revoked only if a new Constituent Assembly of J&K is convened and is willing to recommend its revocation. Of course, Parliament has the power to amend the Constitution to change this provision. But this could be subject to a judicial review which may find that this clause is a basic feature of the relationship between the State and the Centre and cannot, therefore, be amended.

Abuse and Misuse of Article 370

Focusing on the abuse and conscious misuse of Article 370 tells us that 6 entries of 99 provisions of union list and 21 entries from 52 entries of concurrent list are still excluded for J&K. J&K has a separate text for oath. The tenure of the state assembly is six years. There is no mention of the words of secularism and socialism in preamble of constitution of J&K. Prevention of corruption Act, 1988, Indian Penal code, Domestic Violence Act, Religious Institutions (Prevention of Misuse) Act, 1988, Forests Rights Act, Protection of Wild Animals Act and the Urban Land Ceiling Act do not apply to J&K. CBI has limited jurisdiction in J&K meaning that if the CBI wants to exercise powers and the jurisdiction in any FIR registered in J&K State, then it needs the consent of the J&K Govt or the High Court. The Supreme court has only appellate jurisdiction here as it is not vested with the jurisdiction of a Federal Court and can only hear cases on appeal.

Further examining if indeed Article 370 has been beneficial to the people of the state themselves, proves that they have been misled and misinformed. As the People representation act does not apply to the state, the center has no power to enforce delimitation of the constituencies in the state. The Article 370 has also been misused to further interests of select regions. Even though Jammu has more population, has a larger area and more voters, Kashmir has more assembly seats. While Kashmir has 47 assembly seats, Jammu has only 37. If proper delimitation takes place Jammu should have 48-50 seats and Kashmir would have 35-36 seats.

There is no record of the number of OBC’s in the state. Mandal commission report has not been implemented and hence the backward classes here have no reservations in various fields. Deprived sections of the society like SC/STs did not have any reservation in J&K till 1991. Though in 1991 they were provided reservation in employment and education they still do not have any representation in politics and in the state assembly.

The State government also refused to enact laws that would give effect to the 73rd (provisions for Panchyat Raj, 1993) and 74th (provisions for Local Administrative bodies, 1993) Amendments in J&K and hence there is no devolution of powers or democratic decentralization at grassroots. Elections in the Panchayats are being held under the archaic Jammu & Kashmir Panchayati Raj Act, 1989. RTI act of J&K and its amendments are not on par with that of the central government. The J&K Right to Information Act vests more powers in the State government than provided in the Central Act.

Those who speak for continuation of Article 370 and the separatists make no mention of the minority Sikhs and Hindus who migrated to J&K in 1947 from West Pakistan. These minorities are not considered as citizens of Jammu and Kashmir under Article 6 of the state’s Constitution as they came from outside of undivided Jammu and Kashmir. Contrast this with the rights guaranteed under the Jammu and Kashmir Resettlement Act, 1982 for those who had willingly left undivided Kashmir for Pakistan during partition. Such people can still come back and claim their properties or suitable compensation in J&K as per this act. The same J&K government refuses to accommodate the refugees staying in tents for 65 years, who are legitimately the citizens of India! The logic that granting of J&K citizenship to the West-Pak refugees, whose population currently is about 2,50,000, will change the demographic character of Jammu and Kashmir is absurd.

‘Protection of Human Rights Act, 1993’ is not applicable to J&K. Even the J&K Human Rights Protection Act of 1997 was amended in 2002 to take away the powers of the State Human Rights Commission to hire its technical staff. Several cases of genuine Human rights abuses committed in J&K are away from scrutiny. In one such case, Mohan Lal, a resident of Punjab was picked up from Amritsar in 2003. He was inhumanely tortured and eventually breathed his last. When the National Human Rights Commission(NHRC) tried to intervene, the J&K State government sought immunity in the case by quoting Article 370. Though the NHRC set aside the immunity claimed by J&K government, the incident is of deep concern and is yet another example of abuse of Article 370.

Anti-defection law for anti-party activities where a member could be expelled is also diluted in J&K as the decision lies in the hands of the legislative party leader and not in the hands on the speaker. Article 361A which provides immunity and protects freedom of press to cover legislative assembly proceedings is also not extended to J&K state. While the ministers quota for various opportunities in education, employment, etc. is 15% elsewhere in the country, it is 30% in J&K. Who other than those select few ruling the state for 65 years can benefit from continuation of such laws?

All the examples above prove that the Article 370 makes a complete mockery of ideas of democracy and notions of international law regarding citizenship. It reduces a substantial section of Indian people in state to the status of second rate and non-citizens of one state. Going back to the case of Vipul Kaul, any iota of hope for the Kaul family was cut short and stifled by the callous response from the then Chief Minister Ghulam Nabi Azad’s secretary who said, “The government of Jammu and Kashmir is not bound to obey the orders of the Home Department of India due to Article 370 which gives special status to the state. Hence your child’s medical case cannot be settled.” The apathy of the J&K state government has put the life of a hapless 13-year-old boy at risk.

Constitution does not decide the territory but its the people of India who create the constitution. Hence it is of paramount importance that temporary provisions made to mitigate a volatile situation must not legalize discrimination as has been done in J&K by using Article 370 as a tool. Jammu and Kashmir is a part of India due to accession and not Article 370. Essential feature of Article 370 is the necessity of concurrence of the state government and not of the constituent assembly for any amendments. Article 370 gives constitutional powers to president to make amends without going to the parliament. Article 368 gives the power to the Parliament to amend the Constitution and procedures with an additional provision in Article 370 (1)(b) and Article 370 (3). But for last 60 years, the procedure has not been laid for bringing about the concurrence of the J&K state government on this. It should be noted that J&K’s own constitution in Part II categorically states that “The State of Jammu and Kashmir is and shall be an integral part of the Union of India”. It is the will in Delhi that is lacking in bringing about the change.

Vipul’s mother, Usha Kaul was very scared. She feared that if he isn’t given medicines, his life would be in danger. So is in danger the nation and the ‘basic structure’ of its constitution. To have a healthy nation, each state including J&K needs to be completely a part and parcel of the national mainstream. For this to happen and to rectify the state of affairs in J&K, it needs a medicine. That medicine is abrogation of Article 370.

An Article which sows the seeds of separatism should be scrapped or not, is for you to think!